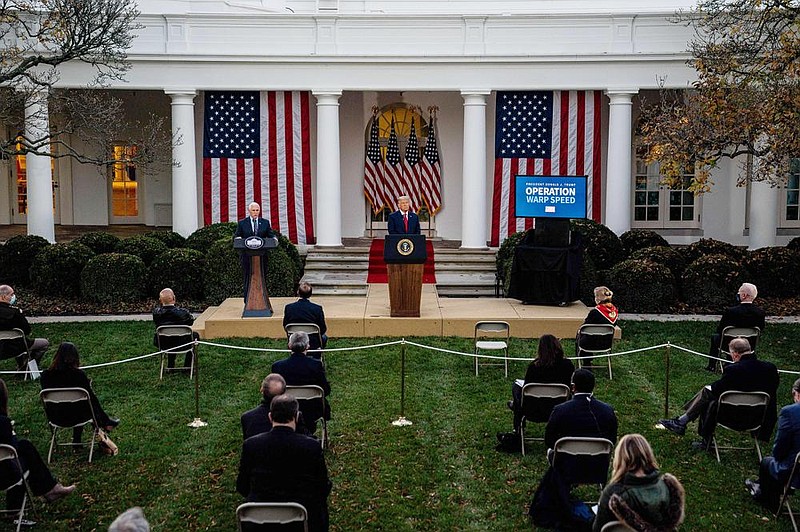 Vice President Mike Pence (left) and President Donald Trump deliver an update on coronavirus vaccine developments. Trump said vaccines would “arrive within a few weeks” and ruled out a national lockdown in the meantime. (The New York Times/Anna Moneymaker)

With covid-19 cases and hospitalizations spiking to record levels, bus drivers and teachers in quarantine, students getting sick and the holidays looming, many school districts are temporarily shutting down in-person classes.

Schools Superintendent Scott Hanback in Tippecanoe County, Ind., said his school system would switch to remote learning until after Thanksgiving.

It seemed like the only safe way to proceed after the myriad disruptions caused by the surging coronavirus.

“It has been very, very difficult,” Hanback said, adding that he has been doing “a lot of prayer, rest and trying to just take care of my mental health and physical health just so I can stay sharp.”

Facing equally g rim conditions, school systems around the U.S. and abroad are taking similarly tough action. Boston, Detroit, Indianapolis and Philadelphia are among those that are closing classrooms or abandoning plans to offer in-person classes later in the school year, and New York City may be next.

Such decisions are complicated by a host of conflicting concerns — namely, safety versus the potential educational and economic damage from schooling children at home, in front of computers, under their parents’ supervision.

Virus transmission does not appear to be rampant within schools themselves. Instead, many of the infections that are proving so disruptive are believed to be occurring out in the community. Educators fear things could get worse during holiday breaks, when students and staff members gather with family and friends or travel to other hot spots.

The nation has entered “an extremely high-risk period,” said experts at PolicyLab, a Children’s Hospital of Philadelphia team that develops guidance. They shifted their advice this week, advocating online-only instruction for areas with rapidly rising rates, at least until after Thanksgiving.

[Video not showing up above? Click here to watch » https://www.youtube.com/watch?v=C1uG6xtQTl4]

Newly confirmed infections per day in the U.S. are shattering records, hitting more than 153,000 on Thursday and pushing the running total in the U.S. to about 10.5 million, with about a quarter-million deaths, by Johns Hopkins University’s count. The number of people now in the hospital reached an all-time high of over 67,000 on Thursday, according to the Covid Tracking Project.

In Hanback’s district in Tippecanoe County, which includes the city of Lafayette, 51 cases out of 13,800 students were confirmed during the first nine weeks of in-person classes. In less than three weeks that followed, that number almost doubled, and cases among teachers and staff members jumped fivefold, Hanback said.

Because of the resulting shortage of bus drivers, students were arriving at school an hour late and getting home an hour late, Hanback said.

“Inside the schools, the same thing was happening with classroom teachers and classroom aides,” he said. “We are exhausting our substitute pool and it became a daily struggle.”

Weekly reports by the American Academy of Pediatrics and the Children’s Hospital Association show there have been more than 900,000 covid-19 cases in children and teens in the U.S., and they have been steadily rising. Almost 74,000 cases were recorded during the week that ended Nov. 5, an all-time high.

Severe illness among children and teens is rare, particularly in younger ones, but they often can spread the disease without showing any symptoms. When schools are disrupted, it’s often because teachers, staff members and other adult employees have gotten sick.

The academy has stressed the importance of in-person education but says uncontrolled spread in many areas means that cannot happen safely in many schools.

By some estimates, more than half of U.S. schools have been offering at least some in-person classes.

In New Mexico, where cases and hospitalizations are at record highs, Amy Armstrong and her husband face a dilemma. They have been sending their 7-year-old son, Damien, to school four days a week since September. But the district outside Albuquerque announced this week that classes will be online-only starting Monday.

Quitting their jobs to watch over their children — she’s a bank employee, he does electrical work — could mean losing their house.

Armstrong said she understands the rationale for shutting schools.

“But do they understand the impact financially, emotionally and physically it’s having on people, on families, on the kids especially?” she said.

On Friday, President Donald Trump offered an update on the race for a vaccine for the coronavirus.

Trump spoke from the the Rose Garden, saying a vaccine would ship in “a matter of weeks” to vulnerable populations, though the Food and Drug Administration has not yet been asked to grant the necessary emergency approvals.

As states impose new restrictions in the face of rising caseloads, Trump asked all Americans to remain “vigilant.” But he ruled out a nationwide “lockdown” and appeared to acknowledge that the decision won’t be his much longer.

Former Vice President Joe Biden, the projected election winner, has not endorsed a nationwide shutdown, but he appealed for Trump to take “urgent action” to curtail the spread of the virus. “The crisis does not respect dates on the calendar, it is accelerating right now,” he said in a statement Friday.

Trump said vaccines would “arrive within a few weeks,” saying they were ready and merely awaiting approval — and would be given “to high-risk individuals right away.” There’s no guarantee that Pfizer’s shot, the front-runner, will get rapid authorization for emergency use. Even if it does, there’s no information yet indicating if the vaccine works in older adults or just younger, healthier adults. Nor does Pfizer have a large commercial stockpile already poised to ship; initial batches of shots would be small and targeted to certain still-to-be-determined populations.

Across the country, the governors of Oregon and New Mexico ordered near-lock-downs Friday.

“We are in a life-or-death situation, and if we don’t act right now, we cannot preserve the lives, we can’t keep saving lives, and we will absolutely crush our current health care system and infrastructure,” Democratic Gov. Michelle Lujan Grisham of New Mexico said in imposing a two-week stay-at-home order.

Oregon Gov. Kate Brown ordered a two-week “freeze” starting Wednesday under which all businesses will be required to close their offices to the public and mandate work-from-home “to the greatest extent possible.”

While most Oregon stores will remain open, gyms, museums, pools, movie theaters and zoos will be forced to close, and restaurants and bars will be limited to takeout. Social gatherings will be restricted to six people.

The Democratic governor warned that violators could face fines or arrest.

“For the last eight months I have been asking Oregonians to follow to the letter and the spirit of the law and we have not chosen to engage law enforcement,” Brown said. “At this point in time, unfortunately, we have no other option.”

In Missouri, with the number of new covid-19 cases soaring and hospitals nearing capacity, St. Louis County’s executive, Dr. Sam Page, on Friday announced strict new regulations that seek to slow the spread of the disease.

For four weeks starting Tuesday, St. Louis County residents are being told to stay home except to go to work or school, shop, exercise or get medical care. Residents were advised to establish social groups of 10 or fewer relatives and/or friends. The four-week period includes Thanksgiving but ends before Christmas.

Also, in-person service at bars and restaurants will be shut down, though carryout and outside dining will be allowed. Businesses, gyms and places of worship will be reduced to 25% capacity, down from 50%. Those inside must wear masks.

The city of St. Louis, which is not part of the county, separately issued an order late Thursday prohibiting gatherings of more than 10 people, effective today. The order placed no new restrictions on in-person dining or additional capacity limits.

Meanwhile, Puerto Rico’s governor announced Friday that she will activate the National Guard to help enforce a curfew aimed at curbing a rise in covid-19 cases and other measures, including once again closing beaches to everyone except those exercising.

Gov. Wanda Vazquez also said the government will limit capacity at restaurants, casinos, gyms, churches and other places to 30%.

The new restrictions start Monday and will remain in place until Dec. 11. Masks and a 10 p.m. to 5 a.m. curfew remain mandatory.

“We will not under any circumstance allow our health system to be placed at risk,” she said. “There are many who have lowered their guard and have not understood that this pandemic is still with us.”

Vazquez also urged people across Puerto Rico to be extremely cautious during the holiday season, encouraging families to get together on Zoom. She said that if violations continue into mid-December, she would close down more businesses and implement more restrictive measures.

Health Department Secretary Lorenzo Gonzalez said the island is seeing more than 600 infections a day, a number he said could rise to 1,200 or more by late December. He also noted that the number of people hospitalized for covid-19 has spiked in the past month.

“We have outbreaks and infections in every corner,” he said.