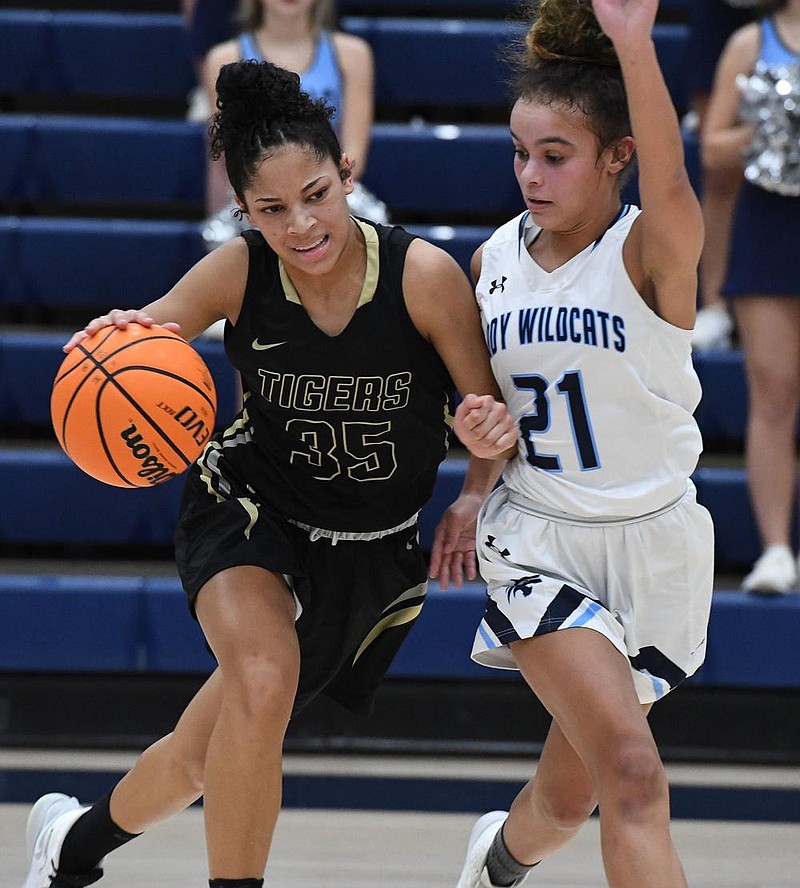 Bentonville came the closest last season to doing it after going 27-1. The Lady Tigers' lone loss was a blowout to No. 2 Fort Smith Northside. All of the top teams have tough games that will make it hard for anyone to finish perfect. Doubtful that any of the coaches care, as long as their respective team finishes with a title.

2.) Is North Little Rock ready to reclaim its status as the state's best?

The potential was there throughout last season, and it was clear the Lady Charging Wildcats weren't far off. North Little Rock may have the most talented team and depth in the state. Making it all work is a good problem for Coach Daryl Fimple to have on his hands.

The Lady Panthers went 23-6 last season behind All-Arkansas Preps member Shy Christopher and a bunch of then-seniors such as Izzy Arnold, Emily Belin and Hannah Ogilvie. But Jay Cook is one of the top coaches in his profession. He does have Harding commitment Kaitlyn Theobald back to lead his new-look squad.

The state's No. 1 player is looking forward to her senior season after the way the Lady Bears lost in the semifinals last season. A title is what she wants, and the Lady Bears have enough firepower to get it. Wolfenbarger has signed to play for Mike Neighbors at the University of Arkansas.

Dauda is hot on Wolfenbarger's heels to lay claim as the top player in Arkansas. She is ranked as the No. 1 center in the country by ESPN. She can run the floor, score inside, shoot three-pointers and block shots. She'll have plenty of chances to shine in marquee games this year.

Her demeanor is peaceful and laid back on the floor, but then you look up and she's got 30 points after three quarters. She gets to her comfort spot whenever she wants, finishes at the rim and can shoot with range. She's among the top 25 sophomores in America and will only get better.

Others to keep an eye on

NOTEWORTHY Bentonville finished the season with 22 consecutive victories before nabbing a piece of the 6A state title with Fayetteville. ... The Lady Tigers need to replace Natalie Smith and Bella Irlenborn, who are now at John Brown and Southwest Baptist, respectively. ... Brown, a Rice commitment, was one of the top players in a deep underclassman class last season.

NOTEWORTHY Bershers has pledged to play for Oklahoma State next season. ... The Lady Bears did lose pivotal pieces in Jazz Coleman, Quinisha Tillery and Eriel West. ... The trio of Wolfenbarger, Releford and Bershers will keep Northside near the top of Class 6A throughout this season.

NOTEWORTHY Expect a big jump from the Lady Charging Wildcats, who were better than their record showed in 2019-20. ... Edwards will be one of the more highly rated guards in Arkansas by the time she becomes a senior. ... Freeman does a multitude of things, which makes her extremely valuable to NLR's title chances.

NOTEWORTHY The Lady Wampus Cats may be the most dangerous team in Class 6A, especially as the season progresses. ... Thomas is looking forward to the Marion game on Dec. 8, the same team she suffered a season-ending leg injury against last season. ... Conway blitzed Jacksonville on Friday, one day after losing a close one to Class 5A No. 2 Little Rock Christian.

NOTEWORTHY Losing two Division I players in Sasha Goforth (Oregon State) and Coriah Beck (Memphis) is tough for any team to overcome. ... Lyles is being recruited by a number of schools, including Colorado, Houston, Southern Mississippi and Tulsa.

NOTEWORTHY Har-Ber's first game of the season on Tuesday against Harrison won't be an easy one. ... Youth was a huge factor last season, but the Lady Wildcats generated success anyway. This season should be a fun one for those youngsters, powered by Koons and McDaniel. ... Jenkins won a pair of state titles at Valley Springs (2010, 2016).