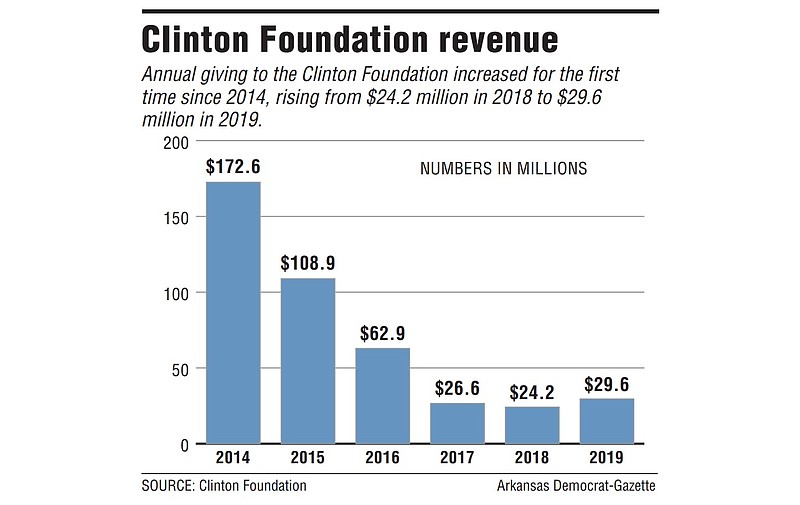 Donations to the Bill, Hillary and Chelsea Clinton Foundation rose in 2019, with giving up for the first time since 2014, according to Internal Revenue Service filings this month.

Most of the money was generated by high-dollar gifts or grants; the 10 top contributors gave a total of $16.3 million last year.

The IRS does not disclose the identity of the donors themselves.

A mix of individuals, foundations and other nongovernmental organizations gave the largest gifts, a foundation spokesman said.

[Audited financial statements not showing up above? Click here to view » arkansasonline.com/1115financials/]

The nonprofit organization’s endowment grew by 10%, finishing with its highest year-end balance ever — roughly $217 million.

Based on the data in the 990 forms, the foundation appears to be financially sound, according to Leslie Lenkowsky, a professor at Indiana University’s Lilly Family School of Philanthropy.

“They obviously have a good-sized group of contributors. They have a terrific endowment, all of which are much better than typical charities,” he said. “If you compare the Clinton Foundation, say, to any of the big Washington think tanks, it does very well.”

“I certainly wouldn’t worry about the health of the organization,” he added.

The foundation’s financial stability is due, in no small part, to a successful endowment drive that began in 2013.

The markets have been more volatile in 2020, plummeting in February, March and April, following the arrival of covid-19, before eventually bouncing back.

Eight months after the start of the public health emergency, some Clinton Foundation programs remain in limbo.

The presidential center has been closed to the public since March 14, resulting in a drop in admissions fees, restaurant revenue and facility rental funds.

Officials aren’t predicting when life will return to normal.

“While the disruption is currently expected to be temporary, there is considerable uncertainty as to the duration of the pandemic,” the organization’s consolidated financial statements note. “[W] hile the Foundation expects the pandemic to impact the Foundation’s financial condition, results of operations and cash flows, the extent of the financial impact and duration cannot be reasonably estimated at this time.”

The foundation also awarded more than $1.75 million in grants to other nonprofit organizations. Of that, $1.25 million went to the Alliance for a Healthier Generation in Washington, an organization that the foundation and the American Heart Association jointly launched to reduce child obesity and promote healthy lifestyle choices.

Kelly Krawczyk, an associate political science professor at Auburn University, says grant-making is a key part of a foundation’s mission.

The aid is particularly important “in times of crisis,” she said in an email.

“Many nonprofit organizations went into this emergency without large amounts of reserve funds. And now, the coronavirus pandemic has made their financial situation even more dire,” she said. “[N]onprofits are currently struggling to survive financially. Yet at the same time, the needs of those they serve are greater than ever.”

While the foundation is now global in scope, Stephanie Streett, its executive director, says the organization’s commitment to Arkansas continues.

Over the years, many of the donations have been earmarked for the Clinton Presidential Center, which includes the presidential library and museum. In 2019, the center reported $12.8 million in expenses offset by $1.5 million in revenue.

“Sixteen years after the Clinton Center’s grand opening, we remain central to the Clinton Foundation’s mission of ‘Putting People First.’ In 2019, the Center hosted a Kumpuris Distinguished Lecture with Justice Ruth Bader Ginsburg in September, a national policy conference on economic inclusion in November, and the fifth class of Presidential Leadership Scholars,” she said.

With covid-19 spreading, the center has curtailed some activities while expanding others, adapting to meet the needs, she said.

“In 2020, while we have had to close our doors to visitors, we continued our work with a feeding program with the City of Little Rock, World Central Kitchen, and other partners that distributed over 680,000 meals across Central Arkansas, and by moving our impactful educational programming and Bridge Builders series of conversations to virtual platforms,” she said.

The foundation has evolved over the years, with some of the most dramatic changes coming in the run-up to the 2016 presidential election.

Then-candidate Donald Trump, a former donor, targeted the organization that year, labeling it “the most corrupt enterprise in political history.”

A Trump-era Justice Department review of the foundation failed to find anything of consequence, the Washington Post reported earlier this year.

The high-profile Clinton Global Initiative, once a magnet for business titans, Hollywood celebrities and heads of state, held its last annual meeting in September of that year.

With the event concluded and the endowment drive complete, the organization has downsized, from 578 U.S.-based employees in 2016 to 329 in 2019.

In 2013, when the fundraising campaign was launched, the U.S. economy was growing and contributions were on the rise.

“We built an endowment so that our programs and impact could continue through challenging times — and that when urgent needs arose, we could address them,” said foundation spokesman Brian Cookstra.

The extra resources have helped the foundation to weather the public health emergency and to offer expanded services when they were needed most, he said.

“Because of our endowment, in 2020 our programs have adjusted to address the covid pandemic, the economic downturn, and systemic issues of racial inequality; while continuing to focus on ongoing challenges like climate change, food security and early childhood development,” he said.

While the foundation still bears Hillary Clinton’s name, she no longer plays a role in its formal governance. She stepped aside in 2015 at the start of her presidential bid.

The 42nd president remains board chairman. Their daughter, Chelsea Clinton, is still a director. Both positions are unpaid.

Despite no longer serving in an official capacity, Hillary Clinton remains actively involved, helping to raise money and to host events, including the economic policy conference in Little Rock.

Along with her husband, she traveled to Puerto Rico and the U.S. Virgin Islands last year to promote disaster recovery and resiliency projects.

The former first couple and their daughter also helped launch a “Family Read & Play Space” center at a New Orleans laundromat in conjunction with Too Small to Fail, the foundation’s early childhood literacy program. 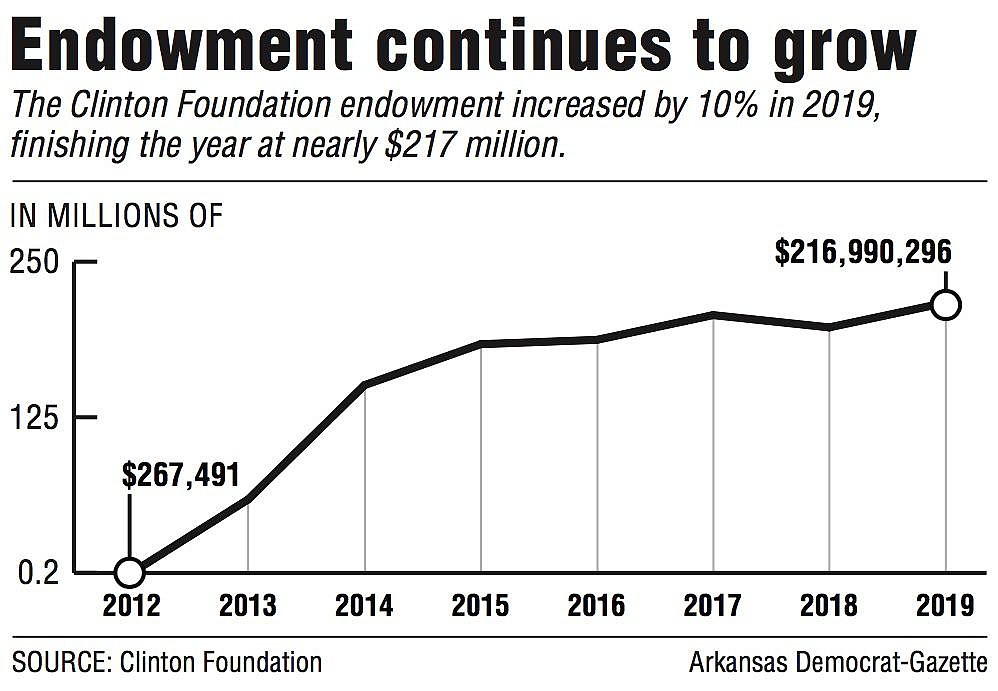