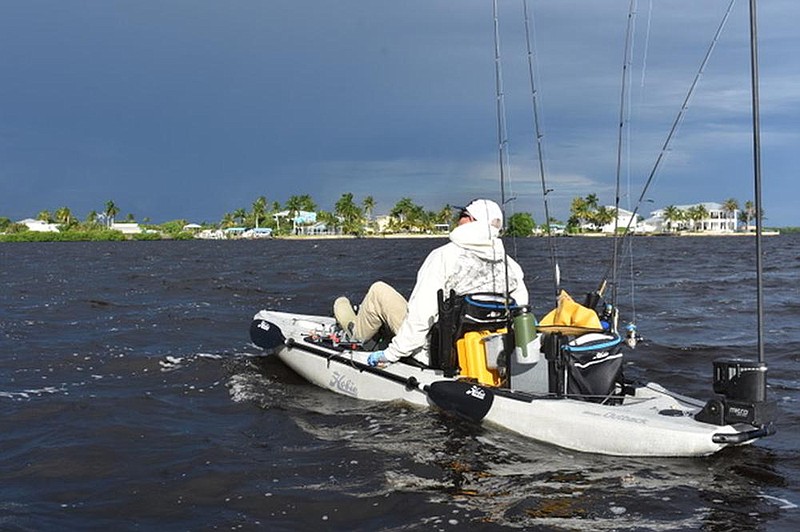 Jerry McBride of Panama City, Fla., crosses an inlet to Matlacha Island on Tuesday evening after getting caught in the open by Tropical Storm Eta. (Arkansas Democrat-Gazette/Bryan Hendricks)

MATLACHA, Fla. -- Most times I exhibit the wisdom of my acquired experience.

Occasionally, though, I can't resist acquiring more experience, like fishing in the ocean from a kayak in the midst of Tropical Storm Eta.

The occasion was a media gathering sponsored by Hobie, AFTCO and Lowrance to preview their new products for 2021. Our host was the Lee County Visitor and Convention Bureau. Lodging was at the Tiny Village, a waterfront cluster of tiny houses that offer excellent and affordable quarters within walking distance of almost every restaurant and art gallery in a village that retains its classic "Old Florida" vibe.

The group consisted of Jimmy Jacobs and Polly Dean, my former colleagues at Game & Fish Publications in Marietta, Ga. Jacobs, an accomplished author and freelance writer, is one of the South's preeminent fishing writers. Dean, a fly fishing specialist, is also prolific and widely published. Lisa Ballard, a prominent fishing and outdoor recreation writer from Montana, was there. So were Carlos Rodriguez of Florida Sport Fishing and Tim Lesmeister, a multimedia personality in Minnesota and president of the Association of Great Lakes Outdoor Writers. Finally there was Jerry McBride, a legendary Florida outdoors writer who specializes in saltwater kayak fishing.

The storm hit hard early Monday morning, but its western edge only clipped the southwest Florida coast. We postponed fishing and spent the day chatting with the manufacturer's representatives. By late afternoon, the sky was mostly clear, and we spent the evening rigging kayaks for a full day of fishing on Tuesday. I was too excited to wait, so I spent a good part of Monday night fishing for snook in the canal adjacent to Tiny Village. I didn't get a bite, which foreshadowed the rest of the trip.

Tuesday dawned clear and breezy, which meant easy access to mangrove keys about a mile away. Hobie especially wanted me to test drive an inflatable kayak that can double as a paddleboard. Hobie's Mirage Drive pedal system provides the power, and an H-Rail Hobie Box strapped to the back held my four rods and tackle, which consisted of Berkley Gulp and Z-Man saltwater products.

The inflatable Hobie is very fast and stable, and it was quite at home in the mangroves where the water was only about 2 feet deep. Water quality was awful, dark and red from massive amounts of freshwater inflow from rain. The water also contained a lot of moss, much like the White River below Bull Shoals Dam during heavy hydropower releases. Water surged through the mangroves at high tide, which meant that snook, my preferred species, were probably hunkered deep and unreachable in the mangroves. I kept two rods rigged with topwater lures for speckled sea trout and soft plastic shrimp imitators for redfish.

I entered a trail that wound through a mangrove forest until I reached a heart-shaped opening where the water was shallow and clear. The mangroves blocked the wind, and the current was moderate.

A loud splash crashed at the edge of the mangroves on the far side. Shortly after, another splash erupted in open water. A few minutes later, a massive snook surfaced and submerged, exhibiting an emerald back and a shimmering black stripe on the flank. That fish easily weighed 20 pounds.

The encounter turned into a turkey hunt. I stayed still and quiet, alternating between cigar-style topwater plugs and paddletail swimbaits. I cast to the snook's swirls. I cast to where I expected it to surface next, and I cast to where it surfaced last. One of my casts almost hit the fish.

I heard a puff of air and found myself in the company of a porpoise that came to investigate the commotion. Porpoises in southwest Florida associate kayaks and lure noises with fish on the line, an easy meal. As soon as the porpoise showed up, the snook retreated into the mangroves. The porpoise swam around me for about 20 minutes, in less than 3 feet of water, before giving up. As soon as he left, the snook came out and started feeding again, but it would not take a lure.

McBride and I returned to that spot together after lunch. The snook was either gone or inactive by then, so we went back out to open water where he believed more fish resided.

The sky to the south was dark and angry. A massive black wall cloud drifted to the northwest, but then it turned and headed our direction. McBride donned a rain jacket and said, "Let's anchor up against these mangroves and ride it out. That big band will pass through in about an hour, and we'll have time to get back before the next band gets here."

The wind got stronger by the minute, eventually reaching about 35-40 mph. I did some mental calculations and decided that, with such a strong tailwind assisting the fast boat, we could beat the storm back to Matlacha, which was about 3-4 miles away.

McBride raised his Power Pole and fell in behind me. The wind created a really hard chop with tall, narrow swells. About 200 yards into the dash, a swell threw my bow high in the air. The wind caught the bow like a sail, spun me around and threw my boat back to the water with a crash. I was in no danger in such shallow water, but it was quite a ride. It must have been really spectacular from McBride's perch. We made it back to the mangroves at the same time.

"I should have stayed right here and shot photos of you," said McBride, laughing riotously. "I'd sell them to every magazine in the country."

For the rest of the night and most of the next morning, that's all I heard. "Let's make a run for it!"

"I didn't think it was possible, but everything I've heard about you is true," McBride said.

I think he was pleased to have found a kindred spirit. 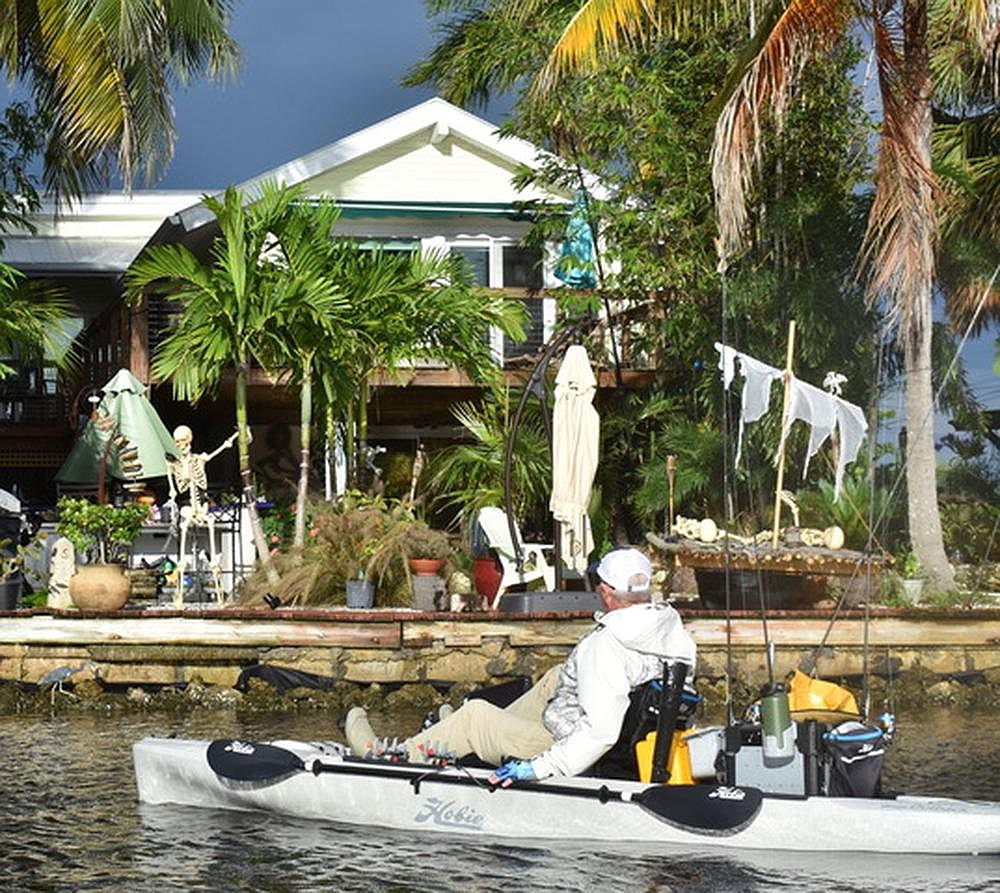 McBride encounters a “friend” at Matlacha Island on Tuesday evening after getting caught in the open by Tropical Storm Eta. (Arkansas Democrat-Gazette/Bryan Hendricks) 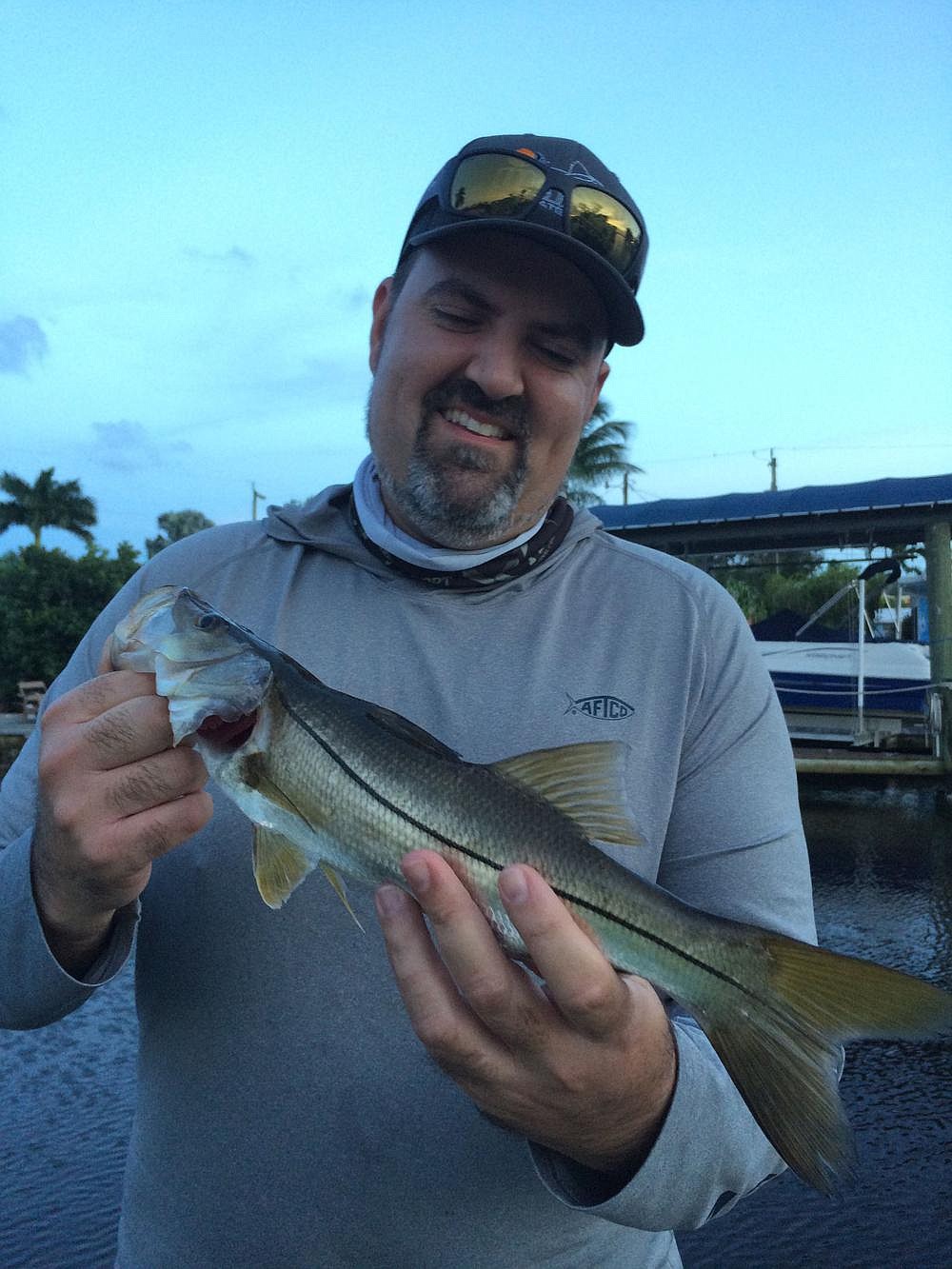