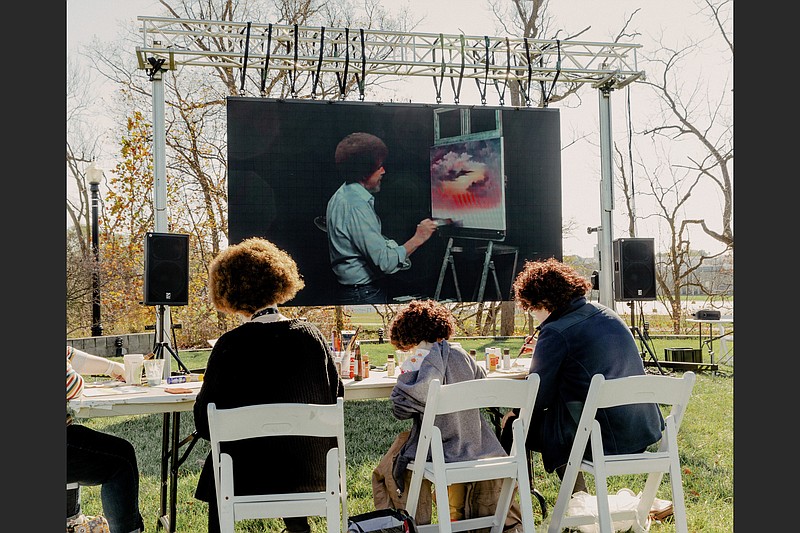 Fans of Bob Ross try their hands at re-creating “Sunset Aglow” from a 1993 episode of “The Joy of Painting,” screened on the lawn near his former studio during the opening of the “Bob Ross Experience” at the Minnetrista museum in Muncie, Ind. (The New York Times/Evan Jenkins)

The 19-year-old from Carmel, Ind., sporting a bushy brown Bob wig that defied the stiff Halloween afternoon breeze, dipped her brush into a pool of purple paint and began tracing the outline of a mountain range, taking her cue from an episode of "The Joy of Painting" on a screen set up on the lawn.

But Ross, whose curly perm and soothing voice were at odds with his breakneck pace, finished his work, titled "Sunset Aglow," five minutes ahead of her. "As soon as he started going with the trees, I was lost," Vann said, her cheeks flushed.

She was among the more than 100 fans of the PBS painter who made the trek — in her case 50 miles, but others came from as far away as Arizona — for the sold-out opening day Oct. 31 of the "Bob Ross Experience," a $1.2 million permanent exhibit and painting workshop series in the city where the beloved television host filmed his show from 1983 to 1994, and inspired generations of fans with his yes-you-can positivity.

Their pilgrimage brought them to Ross' former broadcast studio, painting workshop and temporary art gallery sheltered in a collection of historic buildings that are now part of the Minnetrista museum and gardens. Fans dressed as the painter sampled iced tea — a signature that he sipped between takes — and tried to re-create "Gray Mountain," a vibrant landscape from 1992, in a workshop led by a certified Ross instructor. Revelers meandered along a winding boulevard in a costume parade, with winners receiving Bob Ross bobbleheads, complete with miniature brush and bucket.

"This is fantastic," Brett Estes, the Best Bob winner said, outfitted in a Bob wig (from a costume shop), beard (real) and light blue button-down. His brushes were tucked in the front pocket.

Fifteen masked visitors per hour, with timed tickets, could pose with Ross' easel, palette and the set of brushes he used to create what he called his "happy little trees."

"We made it as close as possible to how it appeared when he filmed here" while still accommodating visitors, said George Buss, vice president of visitor experience at Minnetrista.

The Experience — offered Wednesday through Sunday — is akin to an Easter egg hunt. Items that belonged to Ross, like the brushes he used on the show, are safely behind acrylic. But everything else is fair game to touch. "We really wanted people to be immersed in the space," Buss said. "We have little discoverables everywhere, and we know people will find new things each time they visit."

Ross lovers can slip on a vintage J.C. Penney shirt like the ones he wore on the show or flip through a stack of his fan mail. And they can pore over shelves full of Ross essentials like a jar of Vicks VapoRub, which he used to clear his sinuses to ensure a smooth, velvety voice, and the hair pick he kept in his back pocket to fluff out his perm. 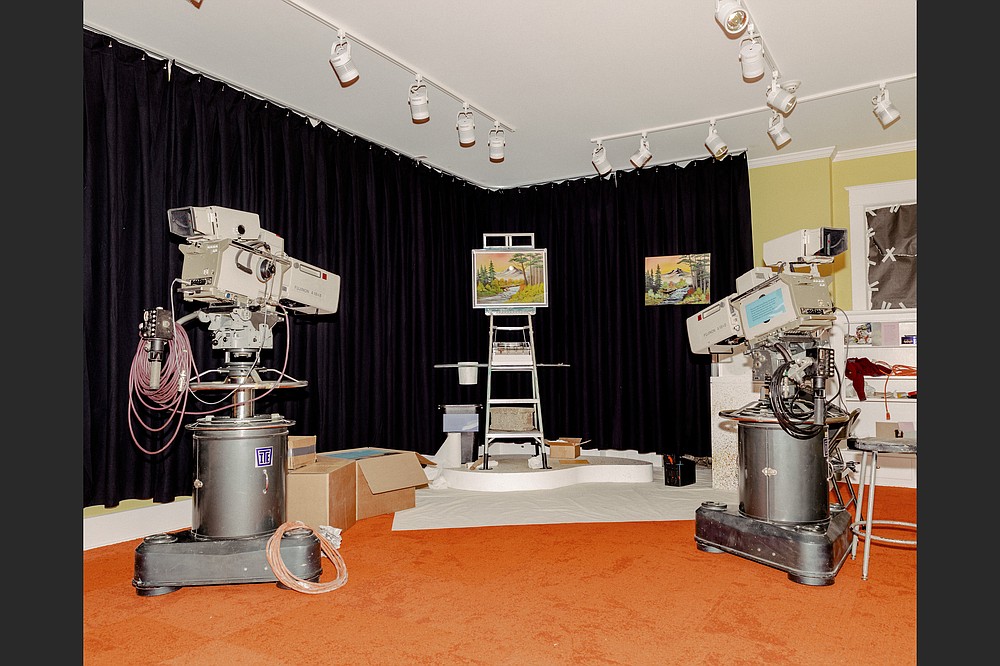 This is the broadcast studio where “The Joy of Painting” was filmed from 1983 to 1988, now part of the Minnetrista museum in Muncie, Ind. (The New York Times/Evan Jenkins)

But the ultimate awaits fans in the far corner of the studio, where a painting of a misty mountain rests on an easel, one of some 30,000 (including copies) that the artist boasted of producing in a 1991 interview with The New York Times. (Ross died in 1995, at age 52, of complications from lymphoma; his works — if you can find one — have been offered for up to $55,000 on eBay.)

An episode of "The Joy of Painting" plays on the camera monitor — and visitors who step in front of the easel will find themselves standing in Ross' shoes. The experience can be overwhelming, leaving some visitors in tears.

They can also step across the hall into a re-creation of a 1980s American living room, its shelves filled with such memorabilia as a Bob Ross Chia Pet and a Bob Ross toaster. "We wanted to also show Bob as fans watching at home in their living room knew him," Buss said.

In another building half a mile up the boulevard, a dozen masked people hunched over socially distanced canvases, trying their hand at "Gray Mountain," in a master class led by Jeremy Rogers, a 21-year-old Ross instructor. (Minnetrista plans to offer the three-hour sessions twice a month for $70 per person.)

Rogers has been certified since 2018 — one of at least 5,000 instructors to complete a three-week training course at the Bob Ross Art Workshop and Gallery in Florida. It offers certification in landscape, floral and wildlife painting and requires that students complete approximately two paintings per day. "It's pretty intense," he said, adding that it was the speed demanded of instructors that he found most challenging. Ross completed each painting live on air, with no breaks or cutaways, in 26 minutes and 47 seconds.

"To do it as fast as him —" Rogers paused and shook his head. "Man." He said it takes him about an hour to complete a painting.

Doug Hallgren, certified since 2003, managed to match Ross stroke for stroke in a demonstration Saturday on the lawn.

The trick, he said, is to embrace "happy little accidents" as Ross called them. "It's about learning not to go back," Hallgren said. "No matter how much you might want to."

Jessica Jenkins, vice president of collections and storytelling at Minnetrista, said that while critics saddle Ross with a reputation for kitsch, she's thrilled to finally see him getting the recognition he deserves. The Smithsonian Museum of American History acquired four Bob Ross paintings and a selection of memorabilia last year, and while the museum has not announced its time frame for exhibiting them, the Bob Ross Experience currently displays six of the 26 paintings in the Minnetrista collection.

"Lots of people don't view Bob as a real artist, which is upsetting because he made it simple on purpose for TV," Jenkins said. She walked over to a Ross seascape — a gift from Ross' widow — on the wall in the Ball home. "This is vastly more than what he did on television," she said. "These are the ones he took his time on; the ones he did for him."

Also on view is an exhibit of 29 Bob Ross paintings that have never been publicly displayed in Oakhurst, a historic Ball home nearby. A majority are loans from Muncie residents, who tell how they acquired the paintings from Ross' demonstrations in local malls or as gifts from the painter himself. 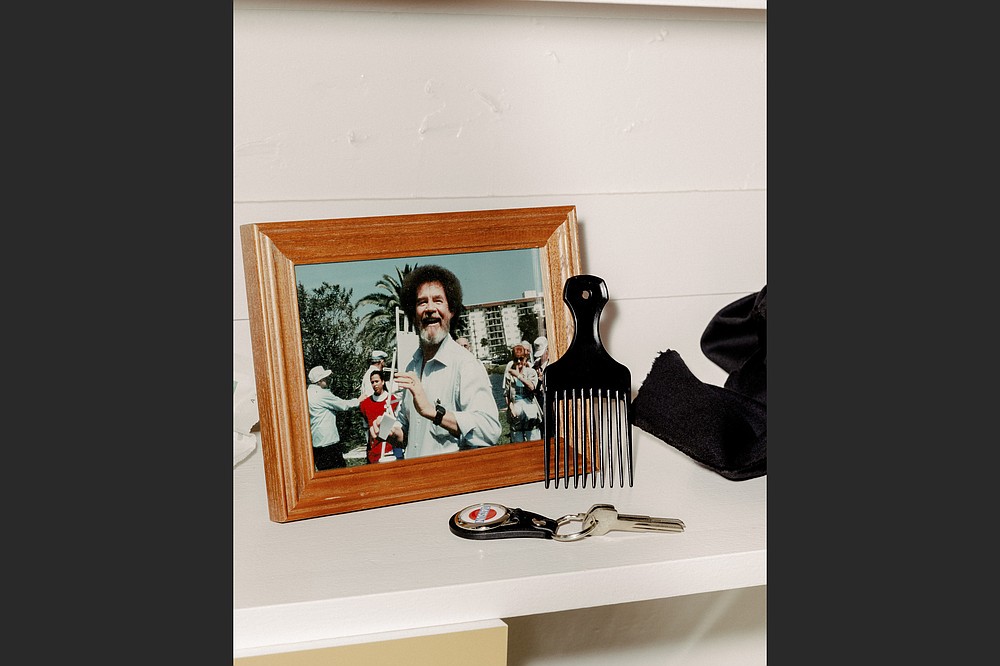 So how did America's television painter end up in a college town in the middle of the country? Before the early 1980s, it's doubtful that Ross, who was born in Florida, could have placed Muncie on a map. But from 1983 until 1994, the painter visited the Midwest city four times a year to tape his show.

(He had filmed the first season of "The Joy of Painting" in a Washington suburb, but the audio and video quality were poor. Ross, who traveled the Midwest teaching painting workshops, wanted to expand his audience beyond the East Coast. So when he advertised on Muncie's public television station and his classes sold out, he suspected he had something special on his hands — and struck a deal to film the series here.)

And the community has long been invested in preserving his legacy. Minnetrista has been planning the $1.2 million project since 2018. It received a $250,000 grant from the Indiana Tourism Council, as well as support from Bob Ross Inc., the company that owns "The Joy of Painting" and the Bob Ross name, among other patrons. (One of them is Twitch, the streaming service that attracted 5.6 million viewers when it livestreamed an all-episode marathon of "The Joy of Painting" in 2015.)

Organizers hope to open the second stage of the project, which includes the renovation of the second floor of the L.L. Ball home and the opening of a permanent painting workshop and gallery space there, next fall.

Jenkins acknowledges that the middle of a pandemic may seem like a strange time to kick off an interactive exhibition like this one, but she says everyone could use a dose of Ross' calm and positivity right now.

"My biggest fear in getting into this project was that I'd find out he wasn't the person I thought he was," Jenkins said. "But the Bob Ross you see on TV is completely sincere. He put everyone else first constantly. I was like, 'Oh, thank God, he was not a jerk.'"