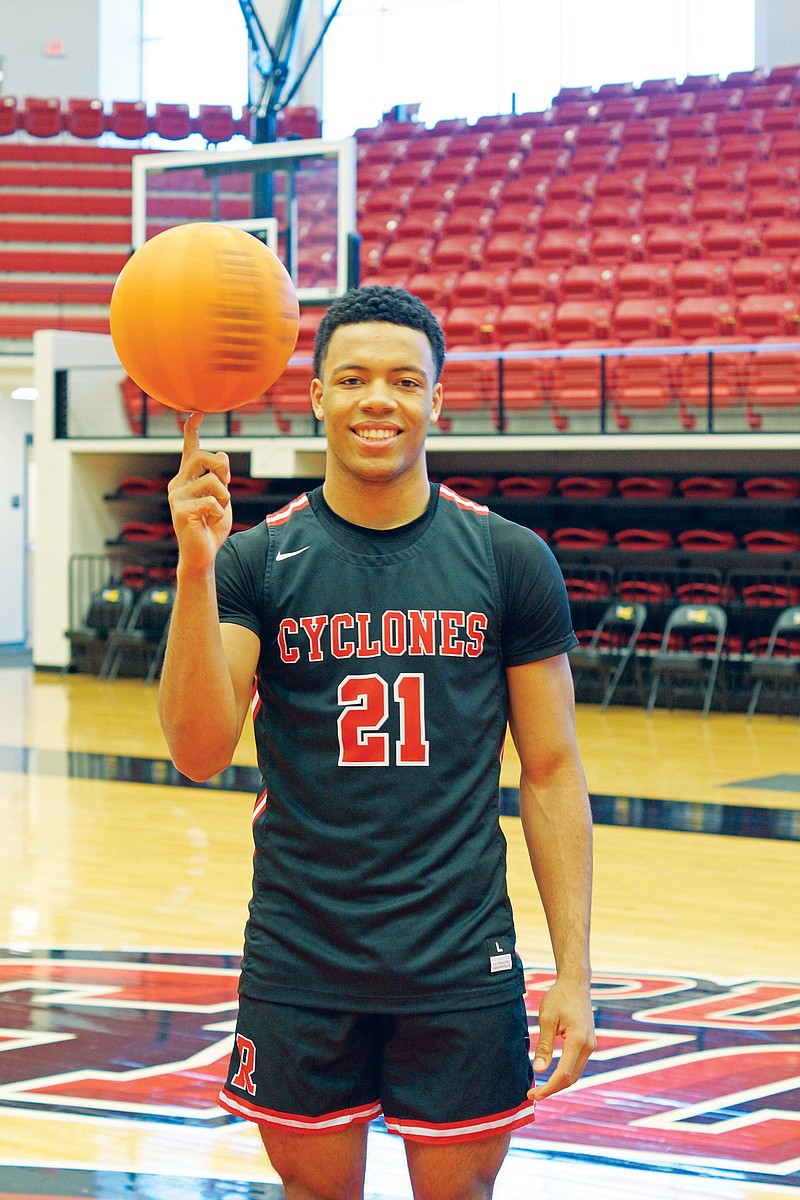 When Kyle Pennington arrived to take the reins at Russellville in 2018, he compared sophomore Cyclone Trey Allen to a wild horse.

“He thought he was complete then,” Pennington said, “but he’s been very coachable and willing to work. He puts extra time in outside of the team. He’s made himself into a very good basketball player.

“We knew one day he was going to be a thoroughbred running in the Kentucky Derby.”

On the verge of Allen’s senior season, he has grown into that thoroughbred.

Allen, a 6-foot guard who averaged 14 points, 6 rebounds and 3 assists per game last season as the Cyclones finished 23-6, is the River Valley & Ozark Edition’s Player to Watch for 2020-21.

“Coach has really put me into a leadership role this year,” Allen said. “Last year, the seniors took on more than I had to do, so I’m a lot more understanding of what they had to go through. That’s made me a better leader.

“I’m not that wild horse anymore.”

Allen’s roots are in New Orleans. Ten years after his father, Renard Allen, first played college basketball at the University of New Orleans, he resurrected his college career at Arkansas Tech in 2007, and the family moved to Russellville. Allen and his sister grew up following Wonder Boy practices and games.

“We went to a Gulf South Conference championship game, and it was my first time ever being on the Jumbotron — me and my sister were cheering him on in the tournament,” Trey remembered. “My mom tapped us on the shoulder and told us to look up.”

Renard Allen was named Most Valuable Player of the 2009 GSC Tournament.

In 2010, at age 31, he finished his Tech career and earned a degree in emergency management.

It’s no surprise that his son, too, gravitated to basketball.

“My dad says that athletically, I am better than he was, but he always tells me basketball is 90 percent mental, and that comes with age,” Trey Allen said.

Off the floor, the coach said, Allen, an honor roll student, was a “‘yes sir, no sir’ kind of guy.”

“I couldn’t be happier with who’s leading our team,” Pennington said. “We’re just excited to get started with him.”

Over the past three years, the coach said, he had watched Allen grow as a player and a leader.

“He had to take on a little bit as a sophomore because he was one of our best players, and that helped him develop as a leader,” the coach said. “He just continues to add something to his game every year. This year, he’s really trying to pour that into the younger players.

“We talk about protecting the logo here. We want Russellville to be something special, something these kids in this community look to. Trey is a great ambassador for that, for sure.”

Allen, who has a 3.3 grade-point average, also serves as a school ambassador for new students and is one of the founders of a new club that has grown out of current events. At press time, the club didn’t have a name — In Your Shoes or Future for All are possibilities, he said.

“An administrator came up to me and said he was just worried about how things are perceived in classrooms and how different races are dealing with what’s going on today,” Allen remembered. “I’m a pretty predominant figure for the Black community at our school, so we started talking about it, and now it’s become a bigger thing.

“We’re hoping to make some changes in the school.”

Allen has college offers from Arkansas Tech in Russellville and Labette Community College in Labette County, Kansas, and has drawn interest from Idaho and Tarleton State in Texas, as well as several other Division II schools in Arkansas.

“I’m hoping to get more offers as the season goes on,” he said.

He said he wants to study physical therapy so that after his basketball career is over, he can stay close to the game. He loves talking to athletes of all sports and calls himself “a ‘SportsCenter’ geek.”

Until then, though, there is his pandemic senior basketball season to embrace.

Like every other team, the Cyclones covet a state championship. Individually, Allen wants to secure a scholarship to pay for college, he said.

“With everything going on, I’m just happy we’re able to play basketball,” Allen said. “We had a scrimmage, and I was playing like it was my last one because it very well could be. That’s how I’m going into my season — play every game like it’s your last.

“That’s how you should play all the time anyway, but now more than ever.”