Shows that try to find their space in streaming sphere 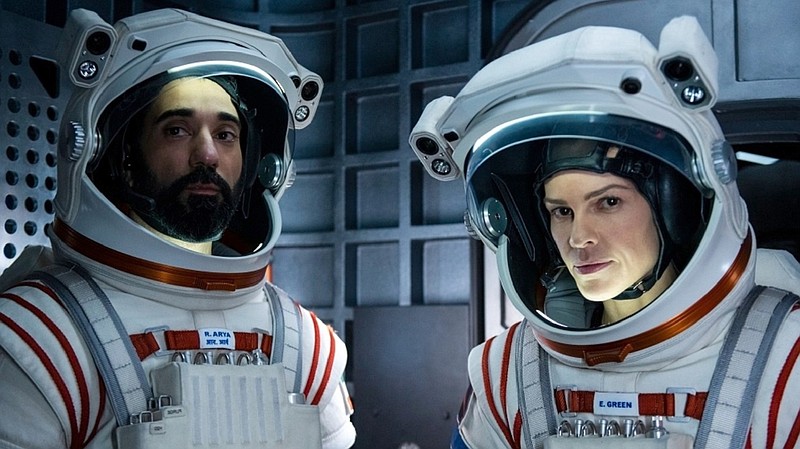 Ray Panthaki (left) and Hilary Swank star in "Away." (Netflix)

Space isn't by any means a new fascination for Hollywood, as any frequent consumer of Ben Affleck's cheeky "Armageddon" DVD commentary will tell you. (Just us? Cool.) Remember how enraptured we were by the ingenuity with which Matt Damon grew potatoes on Mars? Remember Matthew McConaughey and the bookshelf tesseract thing?

Of course, space movies are complicated and a separate entity from space television, now created by those who appear to have taken the lull in time between those famous space movies as some sort of challenge to produce content. When Showtime's "Moonbase 8" premiered, it was at least the fifth television series about astronauts to premiere this year. (That's not counting other space-based shows such as HBO Max's "Raised by Wolves.")

"Moonbase 8" features Fred Armisen, Tim Heidecker and John C. Reilly as incompetent astronauts training for their first lunar mission at a NASA camp in the Arizona desert. The Showtime series is framed as a workplace comedy, with Michael "Skip" Henai (Armisen), Scott "Rook" Sloan (Heidecker) and Robert "Cap" Caputo (Reilly) having been stationed together in isolation for months. The humor is dry and subtle, much of its success hinged upon your feelings toward Armisen (who seems to be given more to do than Reilly).

The six episodes will be released weekly, meaning you might experience intermittent cravings for more space content that even a random influx of moon news can't satiate. Not to worry! Remember all those other recent shows we mentioned? They're available to stream online. Here's a closer look at each one.

But "Space Force" didn't quite hit the mark, with critics referring to it as "a massive misfire" and "astonishingly bad." It's on this list, however, because of one Mr. Malkovich and his "heroic efforts," as the Washington Post's Hank Stuever wrote. "This is something of a revelation to those of us who run rather hot or cold on Malkovich. Until the covid-19 shutdown, I was still considering forming a support group of viewers agonized by his work in HBO's 'The New Pope,' " Stuever continued. "Forget all that. Here, he's the real hero." (Streams on Netflix)

◼️ "Avenue 5" is already the second show on this list to arrive from an acclaimed creator: Armando Iannucci, best known for the evergreen political satire "Veep." His second series for HBO takes on a similar tone, lampooning corporate culture and bureaucracies through the lens of an interplanetary cruise ship that, after accidentally veering off course, has a three-year journey back to Earth but only eight weeks' worth of supplies.

Hugh Laurie plays Ryan Clark, a British actor hired to pose as the Avenue 5's captain — the ship is actually helmed by an engineer who dies in the pilot — and is accompanied by Josh Gad portraying the ship's billionaire owner, Herman Judd. Zach Woods and Suzy Nakamura round out the cast as other Avenue 5 employees, all of whom bumble around while attempting to maintain order on board. In February, HBO renewed the wacky series for a second season. (Streams on HBO Max)

◼️ "The Right Stuff." Loosely based on Tom Wolfe's 1979 book of the same name, "The Right Stuff" takes viewers back to the early days of the space program and follows seven test pilots who will eventually become the first American astronauts. The series streams on Disney Plus, signaling a much tamer telling of the story than Philip Kaufman's excellent 1983 feature adaptation.

Among the show's leads are Jake McDorman (as Alan Shepard), Patrick J. Adams (as John Glenn) and Aaron Staton (as Wally Schirra) — a trio making this one of those "hey, I remember that guy!" kind of shows, depending on your consumption of "Greek," "Suits" and "Mad Men," respectively. Have fun, kids. (Streams on Disney Plus)

◼️ "Away" was recently canceled by Netflix. The single season available to stream will also be its last. But the show might still be worth a watch for fans of the "Friday Night Lights" and "Parenthood" brand of familial emotional turmoil, as Jason Katims, a creative force behind those two series, also served as an executive producer on the newest one.

Created by Andrew Hinderaker, "Away" stars Hilary Swank as former Navy pilot Emma Green, who is tasked with commanding a three-year space mission launching from the moon. As one might expect of a Katims show, it is less concerned with the physical obstacles involved and more so with Emma's emotional ties to Earth — her husband, Matt (Josh Charles), a former astronaut stuck on Earth thanks to a medical condition, and their teenage daughter, Alexis (Talitha Bateman), a high school freshman. (Streams on Netflix)