Hutchinson: Expect Biden will be U.S.' next president 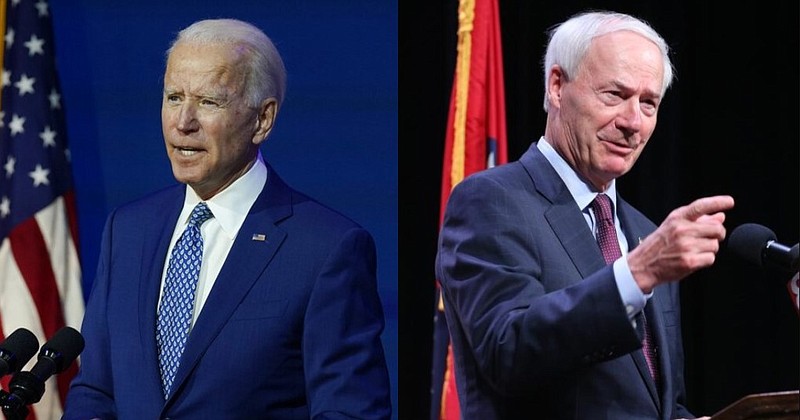 "I expect Joe Biden to be the next president of the United States," the state's Republican governor said during a "Meet the Press" appearance. "It was good, actually, to see President Trump tweet out that [Biden] won. I think that's a start of an acknowledgment."

While Trump hasn't formally conceded, the Florida Republican briefly seemed to acknowledge losing to the Delaware Democrat, tweeting Sunday morning, "He won because the Election was Rigged."

After Biden supporters highlighted the language, Trump insisted the fight against Biden being declared the winner will continue, tweeting "He only won in the eyes of the FAKE NEWS MEDIA. I concede nothing! We have a long way to go. This was a RIGGED ELECTION!"

Though trailing in areas with 306 electoral votes, the Trump campaign has filed lawsuits in several states challenging the tallies.

Twelve days after the polls closed, Biden led by more than 5.5 million in the popular vote, with most ballots tallied.

While the court challenges should proceed, the nation needs to come together once the litigation is resolved, Hutchinson said.

"There are some constitutional assertions in Pennsylvania. There's a recount in Georgia. It is important that those processes go through," Hutchinson said. "The president does not want to undermine those legitimate processes by jumping ahead and conceding the election, but we still have to start that transition."

Until a final determination is made, key information should be shared with the former vice president, Hutchinson said.

WATCH: Gov. Asa Hutchinson (R-Ark.) says "I expect Joe Biden to be the next president of the United States." #MTP@AsaHutchinson: "It was good actually to see President Trump tweet out ... I think that's a start of an acknowledgment." pic.twitter.com/ErBIdItsgh

"It is very important that Joe Biden have access to the intelligence briefings, to make sure that he is prepared. During times of transition our enemies have an opportunity to try to take advantage of us," he said.

Information about covid-19 prevention and treatment should also be shared, he said.

A vaccine developed by Pfizer, said to be 90% effective, could arrive in a matter of weeks, but it will take months to inoculate the entire population.

As a result, the process -- if begun -- would still be underway at noon on Jan. 20, the day of the inauguration.

"We want to make sure that there is a smooth transition, particularly when it comes to the vaccine distribution, the coronavirus, that everybody understands what we're doing there and what the plan is for the future," Hutchinson said.

Trump won a 2016 election he dubbed as "rigged." He's alleging the 2020 election was corrupt as well.

With the White House attempting to de-legitimize the vote totals, many Republicans on Capitol Hill have tried to sidestep the controversy.

"Meet the Press" invited all 53 Republican U.S. senators to appear on Sunday's program, moderator Chuck Todd said; none accepted the invitation, he added.

Spokesmen for U.S. Sen. John Boozman of Rogers and U.S. Sen. Tom Cotton of Little Rock said the lawmakers declined their invitations due to unavailability.

"For the sake of all of us here and my kids and their kids, we need leaders that step up and bring us together, not further kowtow to a guy that's trying to divide us, and that's what it all sounds like," he said.

The Department of Homeland Security's Cybersecurity & Infrastructure Security Agency has said there is "no evidence that any voting system deleted or lost votes, changed votes, or was in any way compromised."

"The November 3rd election was the most secure in American history," the agency stated.

On Sunday, Hutchinson expressed confidence in the agency's findings.

According to news reports, Trump hasn't met with his coronavirus task force in five months, Todd noted earlier in the program.

The team of experts, Hutchinson said, has not eased up.

"I'll be having a meeting tomorrow with the White House Coronavirus Task Force. They're very engaged. They're providing support for the states, he said. "A lot is being done."

"We're coordinating with them on our vaccine distribution, which is critical to have in place very quickly," he said. "Once they have the emergency use authorization [from the Food and Drug Administration green-lighting the rollout], I expect that vaccine to be out for medical care providers within 24 hours," he said.

During the interview, Hutchinson stressed the importance of wearing face masks and of following other public health guidelines.

Another national lockdown is not the answer, he said.

"We're not going to be able to put restrictions on our economy to get us out of this. It is wrong to tell people you're out of business without giving them financial support," he said.

While Hutchinson is portraying a Biden presidency as likely, members of the all-Republican Arkansas congressional have largely withheld judgment.

But U.S. Rep. Bruce Westerman of Hot Springs said Sunday the end is in sight.

"I expect the elections will be settled in the next 2 to 3 weeks when the processes with the legal challenges run their course and the states finalize their results," he said in a text message.

"I don't see any reason why VP Biden should not get security briefings as long as all those involved in the briefings have the proper level of security clearance," he added.

U.S. Rep Rick Crawford of Jonesboro, a member of the House Intelligence Committee, has no objections, his spokeswoman said Friday, noting that Biden had received similar briefings during the fall campaign

Cotton, who serves on the Senate Intelligence Committee, and U.S. Rep. Steve Womack of Rogers did not respond Friday or Sunday afternoon to requests for comment.