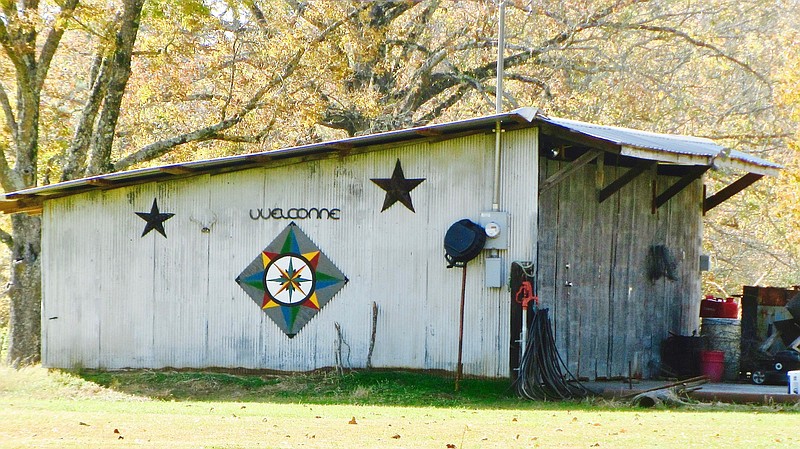 WHITE HALL — After the death of her father, Sharon Price created her first barn quilt in 2016 as a birthday gift for her mother. Now Price is Jefferson County coordinator for Arkansas Quilt Trails, which has more than doubled its span in 2020.

At this time last year, official quilt trails existed in five Natural State counties. Now there are 12, with Jefferson County among the most recent. Other new trails include those in Washington, Logan, Pike, Izard, Independence and Franklin counties.

Another 19 counties are working toward membership, which requires at least a dozen of the colorful outdoor images — not actual quilts, but paintings in quilt-style patterns. Designing and painting them is becoming an ever more popular craft. They may be attached to a barn but more often adorn a house, shed or other structure (even a mailbox).

"Our barn quilts are so much more than a tourist attraction," says Renee Carr, founder and state coordinator of the growing organization. "In addition to its visual appeal, each quilt block preserves a story about local people, places or traditions that otherwise might not be remembered. Viewing them is a pandemic-friendly pastime, driving Arkansas highways and byways to discover the splashes of color."

Like Carr and some other devotees, Price developed an interest in barn quilts while traveling in other states. She has painted 15 of them so far and enjoys the effort "because I love both quilts and crafts." She attributes their rising popularity to "the colorful outdoor expressions they make to people passing by."

The website arkansasquilttrails.com lists the addresses of the locations on the 12 trails. There's also a color photograph of each one along with an account of its origin and content. The name and contact information for each county coordinator are listed as well.

The Jefferson County pattern Price painted for her widowed mother, Billie Cook, is called "Sunflower Bouquet." It hangs on Cook's barn along Cook Road outside White Hall. According to the quilt-trails website: "Quilting has been a big part of Mrs. Cook's life and she fell in love with the barn quilts during travels across the country. Sunflowers are one of her favorite flowers."

Two more Price-painted quilts, titled "Welcome Home" and "We Love America," are mounted outside the Redfield house of friends on a corn crib that dates to the 1930s. More Price creations appear outside the shop she and husband Jim own on River Road in Redfield. Hanging on opposite sides of their mailbox are "Three Crosses" and "Patriotism."

On the outskirts of Pine Bluff, the Sweet T property of Ashley and Travis Thompson on Weekly Road is the location for four quilts, one crafted by her daughter, Madelyn. Three have "star" themes: "Arkansas Star," "Amish Star," and "8-Point Star."

At another Pine Bluff site, Lazy V Farm on Camden Cutoff, James and Barbara Varnell's three barn quilts can be seen beyond the red entrance gate. There's a notably intricate design to "Mimi's Garden," whose paint colors aim to echo the beauty of the spider lilies and spiderwort flowers that bloom yearly on the property.

State coordinator Carr reports that 19 more of Arkansas' 75 counties are working to create trails. She says the next two likely to qualify are Benton and Newton counties.