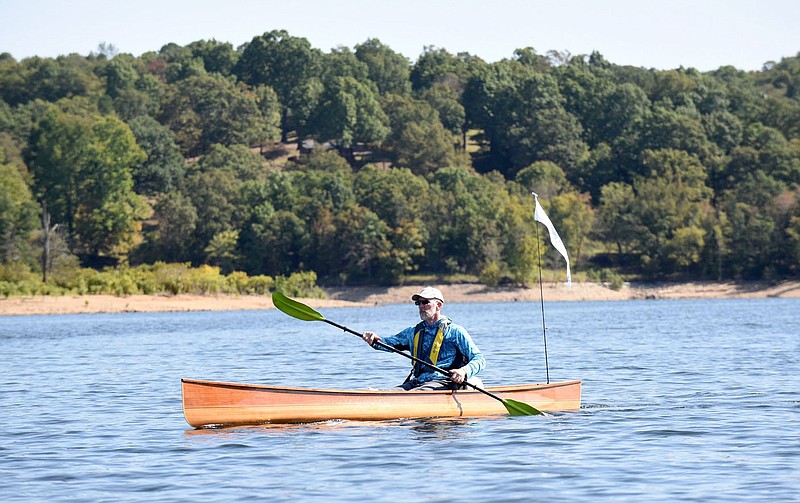 Tony Eliasen of Bentonville paddles along Beaver Lake on the first day, Oct. 2 2020, of his 120-mile canoe adventure from the U.S. 412 bridge on Beaver Lake to downtown Branson. Eliasen figures he did about 20,000 paddle strokes each day of the journey. (NWA Democrat-Gazette/Flip Putthoff)

Tony Eliasen's canoe trip of a lifetime wasn't on some far-away waterway. On a chilly October morning, he slid a canoe he built into the upstream end of Beaver Lake near Springdale, eager to start an epic adventure.

Six days and some 100,000 paddle strokes later, the bow of his boat touched land in downtown Branson, Mo. at the end of a 120-mile journey.

The trip took him the length of Beaver Lake in two days, all of Table Rock Lake in a bit over three days and half of Lake Taneycomo in a few hours.

It's a trip Eliasen, 53, of Bentonville had on his agenda of the mind for months. He needed the perfect boat to pull it off. Sawdust and wood chips started to fly in his home workshop as Eliasen built a sleek, cedar-strip canoe that'd be ideal for his lake-hopping trip.

He finished the floating work of art in July, then put paddle to the mettle training for the October launch day.

Even as he trained, Eliasen wondered if he was up to the task. As summer turned to fall, confidence his paddling skills and his boat grew

"It's no speed demon," Eliasen said of the canoe his two hands created, "but it moves along pretty good."

Most of summer gave Eliasen time to work out the logistics of paddling 120 miles, about 20 miles a day, mostly on lake water with no current.

Eliasen and his wife, Kristi, became an expedition team. Each day Eliasen completed his daily miles. Kristi met her husband with their white pickup. They'd load the canoe and drive back to their home near Bentonville. That way Eliasen would get the much-needed rest to paddle the next day. It also eliminated the need to take camping gear and figure out where he'd spend each night.

They'd be on the road the next day, sometimes dark and early in the morning, driving to the start the new leg of the trip.

Light fog rose from Beaver Lake on a 39-degree Friday morning on Oct. 2 when Eliasen settled into the seat of his canoe to start the trip. Conditions were ideal, and he reached the Arkansas 12 bridge about 3 p.m.

He skipped the next day, Saturday, to avoid heavy boat traffic of a major bass tournament on the lake. Sunday was an off day, too, because of strong wind.

On Monday, Oct. 5, it was paddle, paddle each day until he reached Branson on Oct. 10.

One minor detail: Two giant dams, Beaver and Table Rock, stood in the way. Kristi or Eliasen's pal, Bob Mitchell, met the the voyager to give him a lift over the dams.

Eliasen chose a kayak paddle to move the peppy canoe along. Eliasen figures he averaged 20,000 paddle strokes in a 20-mile day.

"The first hour of the morning is the magic," he said. "There's the sunrise, and there's fewer people on the water. Wildlife is real active."

On the White River, downstream from Beaver Dam, Eliasen's canoe glided within feet of a beaver working the water's edge. Deer, red fox, herons, osprey and bald eagles were wildlife delights on land and water.

As the hours drift by each day, paddling becomes automatic, he said.

"Your body takes over. It's like an unconscious act."

Eliasen is a man of deep faith, which was important to him along his journey.

"I like to talk to God when I'm on the water," he said. "It's just him and me and no distractions. That makes it easy."

Each evening Eliasen shared pictures of the day with friends on Facebook and penned his thoughts. One of his favorite photos is the sunrise reflected brightly on the side of the cedar canoe.

"Paddling into the glow of the Ozark sunrise, pushed by an unfelt breeze. Moments like these are simply a gift from God," he wrote.

Eliasen was blessed with near perfect weather the entire trip. Headwind was a big concern.

"I was so fortunate because the week before was 10-15 mph wind," Eliasen noted. "But the trip was an absolutely perfect wind week. Calm with an occasional breeze." 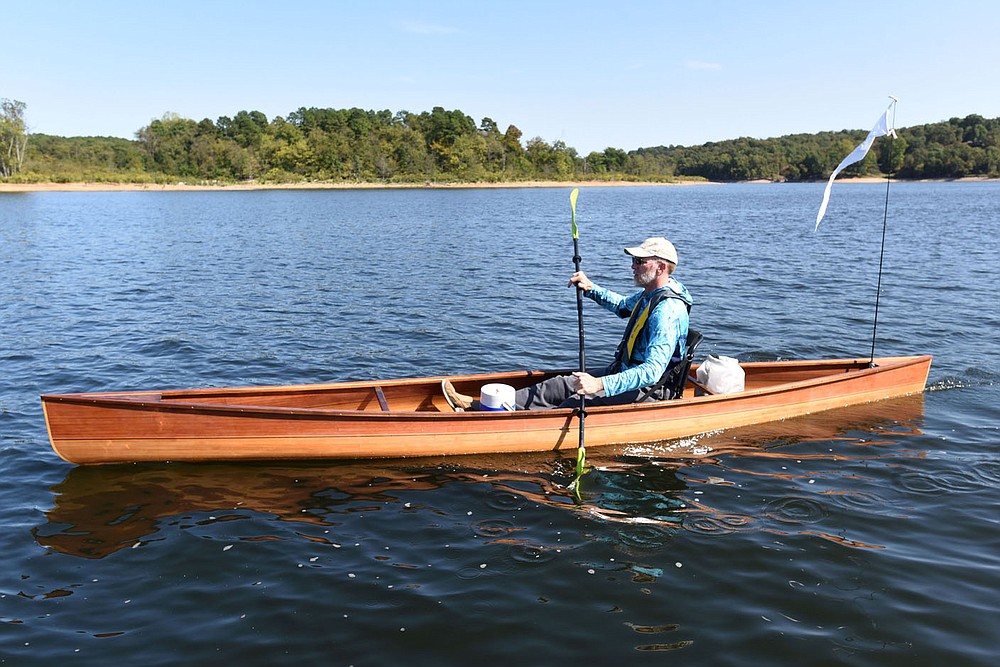 Tony Eliasen paddles near Horseshoe Bend Park on Beaver Lake during the first day, Oct. 2 2020, of his 120-mile canoe trip from the U.S. 412 bridge to downtown Branson. (NWA Democrat-Gazette/Flip Putthoff) 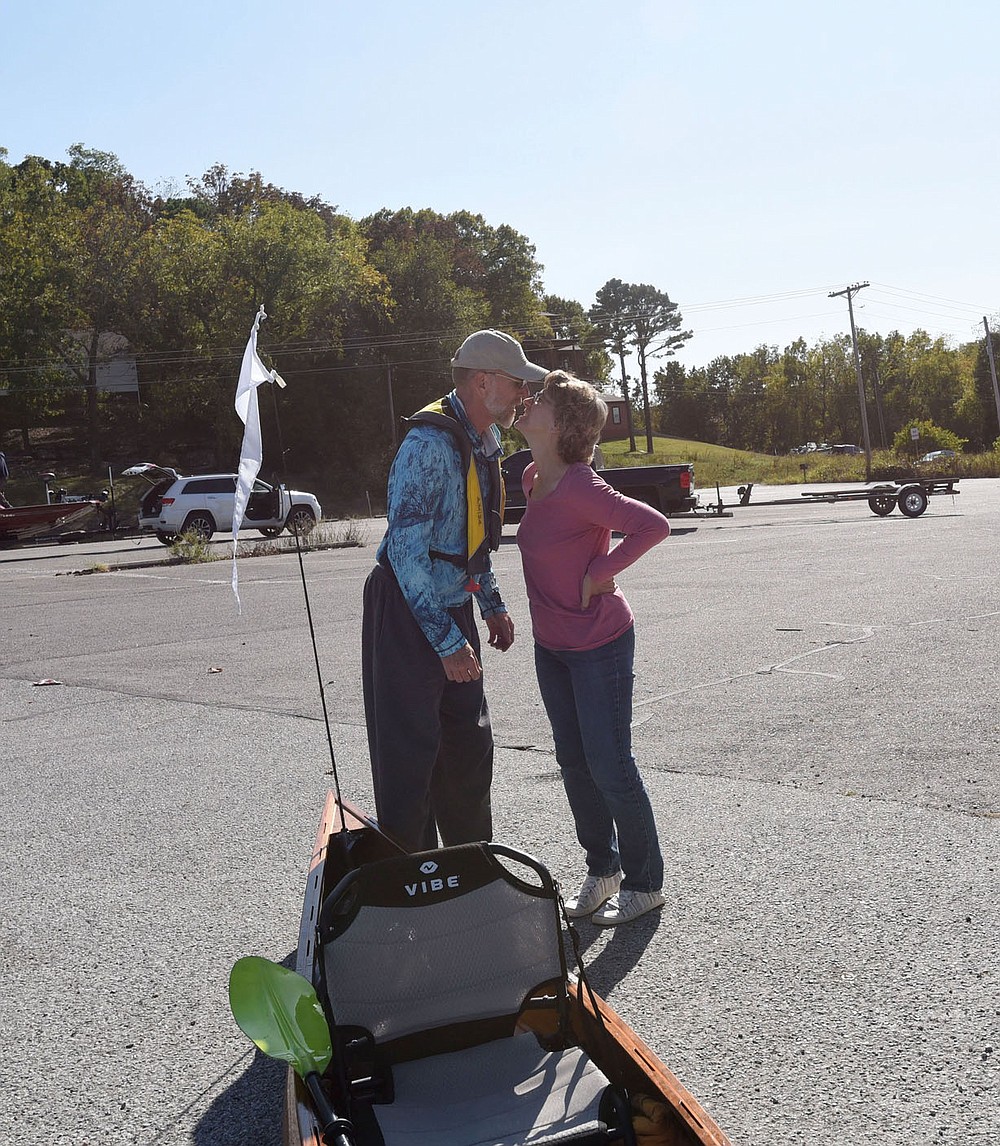 Eliasen gets a kiss from his wife, Kristi, after paddling 20 miles from the U.S. 412 bridge to the Arkansas 12 bridge on the first day of his canoe trip to downtown Branson. (NWA Democrat-Gazette/Flip Putthoff)

Gliding quietly in his canoe, Eliasen sneaks up on a beaver on the White River downstream from Beaver Dam. (Courtesy photo/Tony Eliasen) 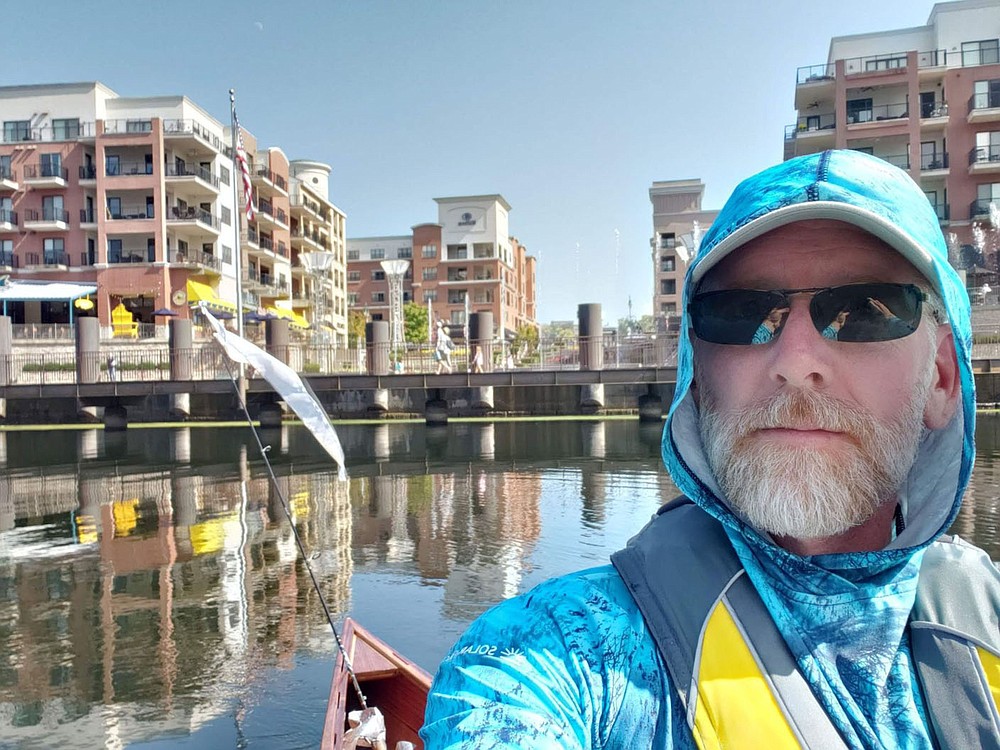 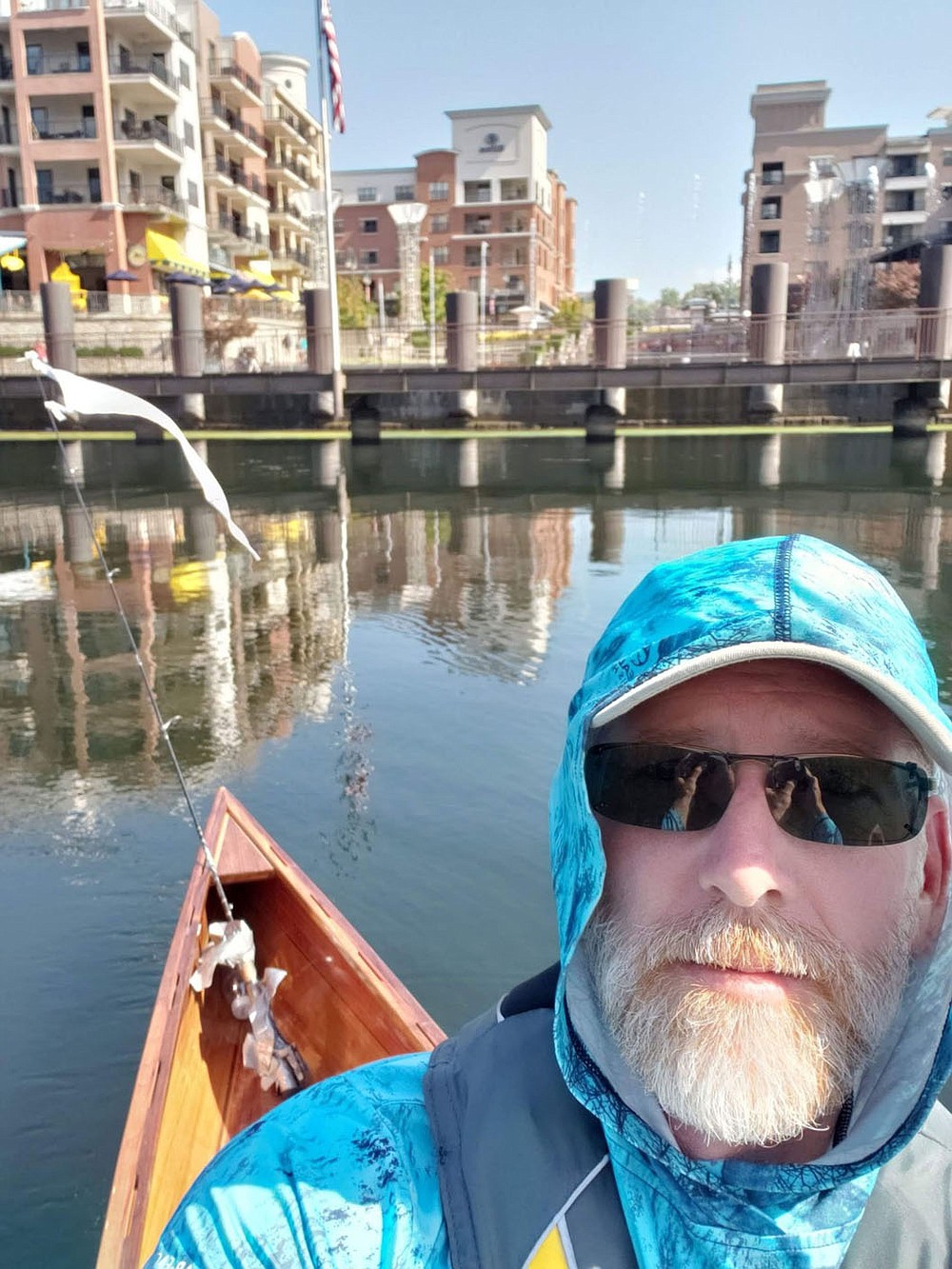 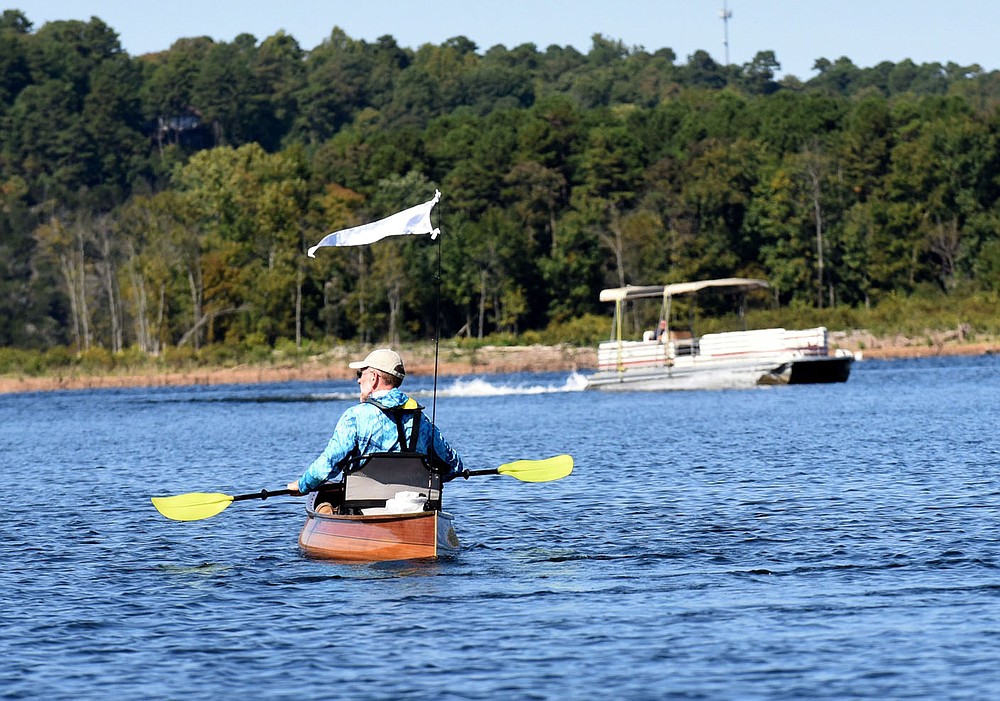 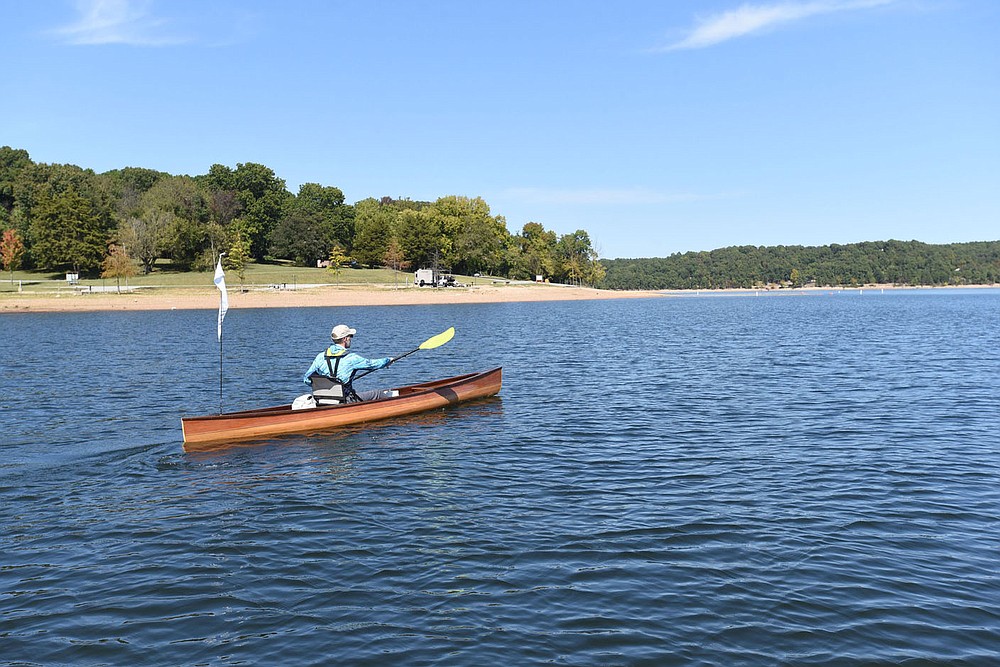 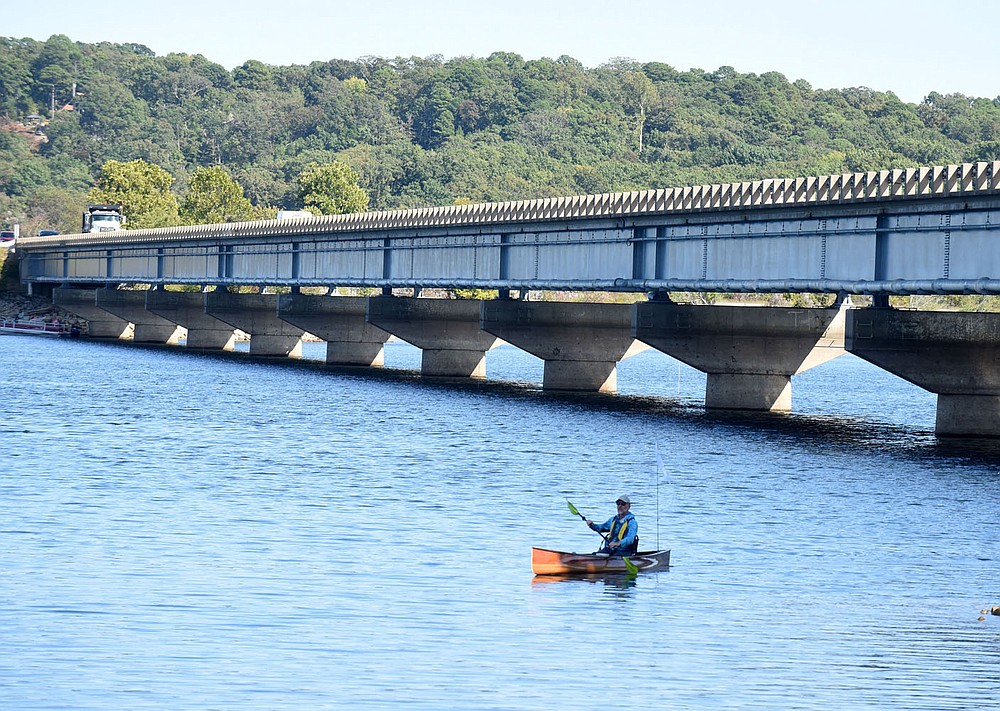 Eliasen wraps up the first day of his trip, taking out at the Arkansas 12 bridge after paddling 20 miles from the U.S. 412 bridge. (NWA Democrat-Gazette/Flip Putthoff)
More News