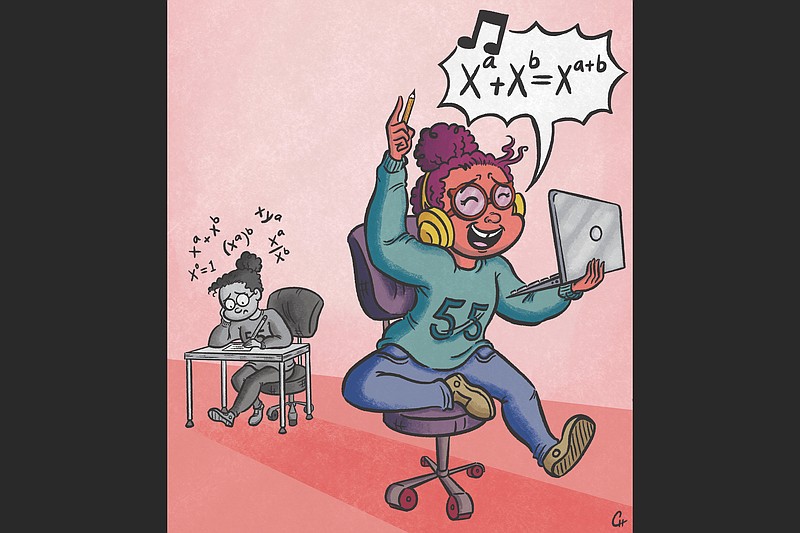 Shirley Forehand teaches algebra and geometry at Hall High School in Little Rock. When she learned about a new program called Muzology that could help her students navigate the sometimes puzzling universe of numbers, she jumped at the chance to try it.

"It's like 'Schoolhouse Rock!' ... on steroids," says Forehand, referring to the series of animated shorts that aired between Saturday morning cartoons starting in 1973 and whose catchy songs taught a generation of cereal-crunching children about conjunctions, adverbs, multiplication tables, how a bill becomes a law and other lessons (many of the "Schoolhouse Rock!" songs were written and performed by the late Bob Dorough, a jazz musician who was born at Cherry Hill in Polk County).

Muzology incorporates music, videos and dance, delivered through internet-connected devices, to explain pre-algebra math in a way that is fun and not intimidating, says Forehand, who introduced her students to it three years ago as part of a pilot program.

"I looked at it and was all about it," she said last month. "It was new, it was different. They are professional videos, the examples are awesome."

Along with Hall High and other schools in Little Rock, Muzology is being used in districts in Arkadelphia, Camden, Clarendon, Danville, Greenbrier, Springdale and West Memphis and has gotten support from Gov. Asa Hutchinson and first lady Susan Hutchinson. It is also used in 47 other states as well as Guam, Puerto Rico and at schools on U.S. military posts overseas.

During the 2019-2020 school year in Arkansas, more than 13,000 videos were watched and more than 24,000 in-platform quizzes were completed. Average pre-test scores improved from 50% before watching a video to 80% post-test, according to Muzology.

At Hall, students take the NWEA test periodically during the school year to assess their academic growth.

"It identifies weaknesses and areas where I need to do an intervention," Forehand says. "That's where Muzology really helps me. I can use it as an intervention and I'm not insulting the kids. If they need a third-grade level skill, I can do that but it doesn't look like a third-grade piece of work in front of them." 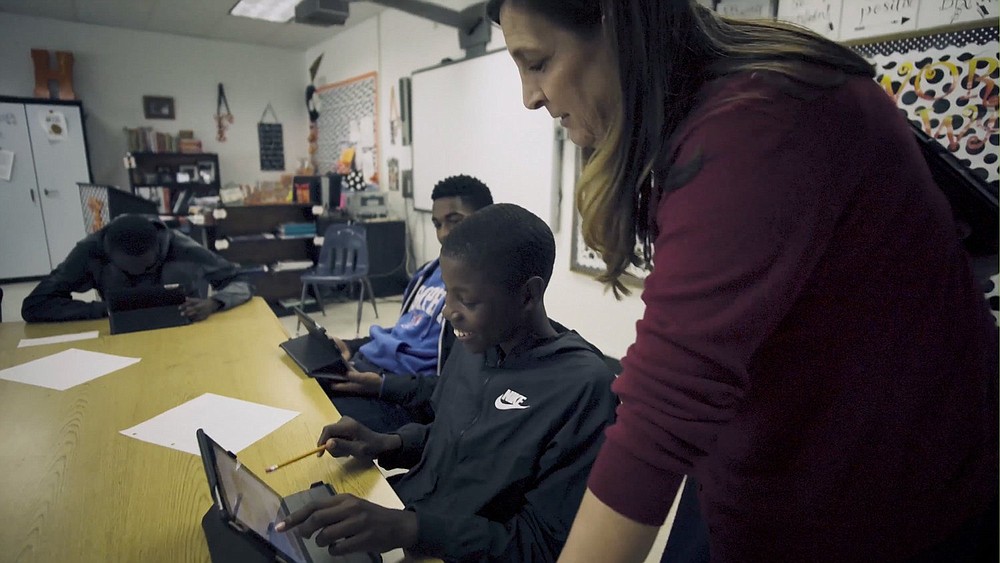 One of the things Forehand liked most was how Muzology incorporates vocabulary not normally associated with lessons.

"I don't make assignments, I make playlists," says Forehand, who is in her 26th year as a teacher and 11th at Hall. "The students don't take quizzes, they take challenges. They earn silver, gold and blue records — we call them platinum in my classroom."

Some students — in typical ninth- and 10th-grader fashion — responded with skeptical shrugs and eye rolls at the thought of watching math-related music videos when she first started using the program, she says.

But they started to come around.

"Teenagers typically want to save face and they would say, 'Oh, it's OK.' But you would hear them singing down the hallway. You would watch them doing the motions like they were doing a worksheet because they were recalling the information and choreography from the video."

Another thing that let Forehand know she was on the right track was when she noticed her students not skipping problems, especially ones involving those most frightening of figures — fractions.

"Fractions are something students are always afraid of. They will just skip problems if they see a fraction in it ... that's the video I hit hard and heavy."

Using Muzology, she says, "they actually gave themselves the opportunity to stop skipping fraction problems."

And it goes beyond math.

"They not only have confidence in my classroom ... they are getting these 100 percents in the classroom and they are starting to see themselves grow. They take that to other classes."

Three years ago, the school's band director called about one of her students.

"He said: 'I don't know what you're doing, but keep doing it.' That student had become so much more confident and had become a section leader in the band." 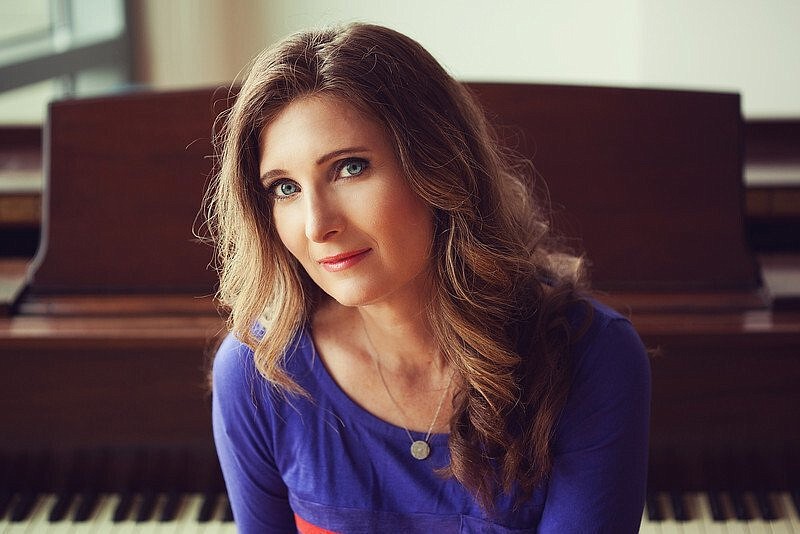 Dr. Lana Israel, Founder/CEO of Muzology (Special to the Democrat-Gazette)

Muzology is based in Nashville, Tenn., and was co-founded by Chief Executive Officer Lana Israel, who received her doctorate in experimental psychology from Oxford University where she studied as a Rhodes Scholar, and Bob Doyle, a music industry veteran and longtime manager of Garth Brooks.

"I became fascinated with learning and memory at a very young age," says the 45-year-old Israel, who wrote a book — "Brain Power for Kids: How to Become an Instant Genius" — when she was 13.

She was also enamored of music and after graduating from Oxford, she went to work in the music industry, first with Stealth Entertainment in New York, then Musical DNA in Indianapolis and Intero in Nashville.

"I realized how powerful music is as a learning medium," she says. "That was well over a decade ago and sparked this very intense fascination for me with exploring how we could use music to supercharge learning."

By 2015, she was living in Nashville doing data analytics work for Doyle and Brooks and pitched her Muzology idea to the manager.

"Anecdotally, we've all experienced the immense learning power of music," she says. "What if we could find a way to position music, this incredible pedagogical tool, beyond early childhood learning and teach entire subjects using the modality of music? That was the beginning of Muzology."

Through their music-biz connections, Israel and Doyle began working with songwriters and producers from pop and country to hip-hop "to create great-sounding, high-production music videos that teach in a rigorous manner entire subjects," she says.

They also constructed a digital learning platform to deliver the videos and information to teachers and students.

"Students watch music videos, progress through challenges to extend the information they learn in the videos. Teachers can create custom playlists and assign them to groups of students or individual students," Israel says.

Students answer warm-up questions to unlock a music video. They then watch the video multiple times and once they feel like they have grasped the information, they progress through three levels of challenge — silver, gold and blue. To "level up" students must get 100% of the questions correct before advancing.

"While the experience for teachers and kids seems like fun, there is a lot of deep thinking and subject matter expertise and reliance on tried and tested theories in motivation and cognitive psychology that inform the creation not only in the way our platform is structured, but in the way we create and design our music videos," Israel says.

Everything from lyric structure and choreography to song production is meticulously processed toward teaching a particular lesson, she says, adding, "it's all driven by science." 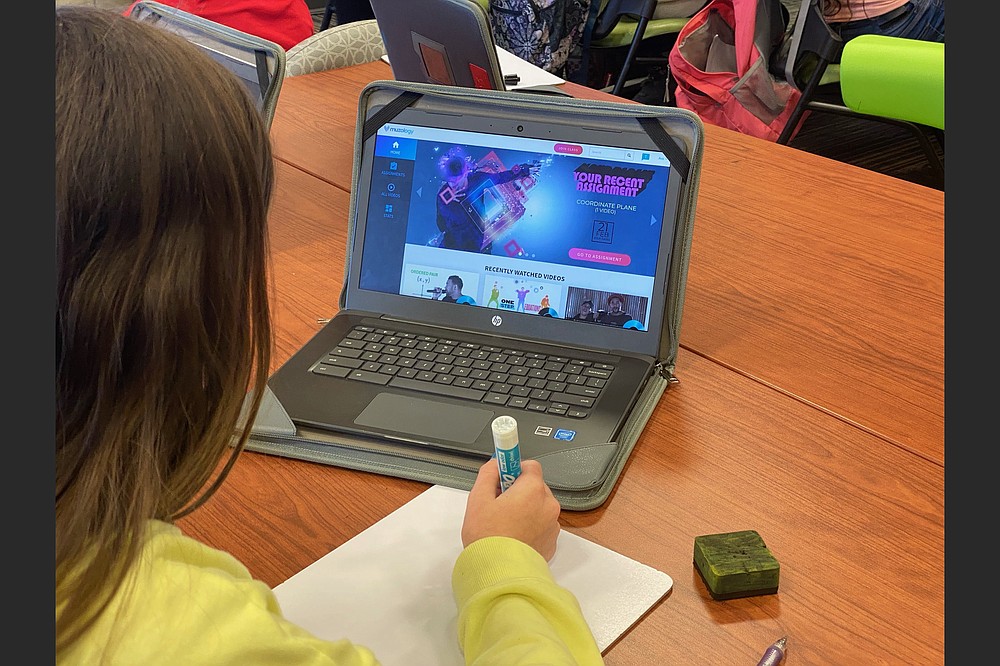 A student at Don Tyson School of Innovation in Springdale uses Muzology during class. (Special to the Democrat-Gazette)

"It was mind-blowing for me," he says of his first reaction to the program. "It makes learning fun and correlates with what I teach every day. And it's hip. When I introduced it to the kids, they were like, 'OK, Mr. Burks.'"

The program not only helps his students learn math, it also allows them to burn off energy.

"They even make up their own raps and songs," he says. "I use it for fun time for the kids to get up and dance, and I also use it to teach and as an assessment tool as well for the kids who are struggling with math."

Forehand says she had her students show her dance moves from the videos.

Earlier this month, Burks used Muzology to introduce the subject of whole numbers.

"Muzology has a video on integers, so the students get my philosophy of teaching and they also get the video version from Muzology ... The kids love it. I think it's the different songs. The artists dance and the kids incorporate the dances they see the artists do. It's kid-friendly and it's a very student-centered approach."

With the pandemic, Burks, who teaches three classes a day, is in the classroom with some students while others are online.

"It's strenuous," Burks says of teaching in the covid-19 era. "It's different, but you have to be open-minded about it and think positively."

At Hall, where some students are in class and others are online, Forehand says teaching during the pandemic makes her "feel like an octopus, being pulled in 101 different directions. We are doing the best that we can do and trying to understand that students are in different situations than they are used to being in also. You try to make accommodations and allow understanding for them."

Israel notes that Muzology's approach is a good fit for learning in these times.

"It lends itself well to the new normal, where a lot of students are learning remotely," she says. "It's a challenge for educators to keep them motivated and learning, so we had teachers say to us during closures last year that Muzology was the only thing their kids would use. We've seen the platform be a great fit for these hybrid learning scenarios."

Arkansas schools that used the platform last year are not being charged for use this year, Israel says.

"That showed me how much they want to help everybody," Forehand says. "I really believe in this. It's the first thing that's come across that doesn't insult teenagers, that helps them and it takes just a whole different spin on school."