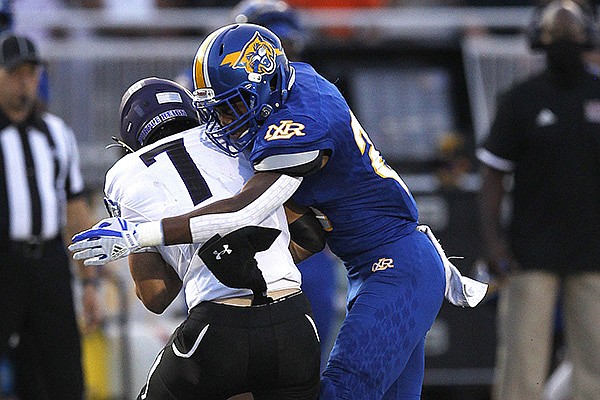 The 2022 in-state crop for football is very impressive and North Little Rock junior linebacker-safety Davian Vayson is another prospect college coaches should know.

“If they’re going to his side I feel good about it because he’s going to go make a play.”

Vayson, 6-1, 195 pounds, has recorded 64 tackles, 8 tackles for loss, 2 sacks, 4 quarterback hurries,, 4 forced fumbles, a pass break up and 4 interceptions, including 2 returned for scores.

“He’s real physical violent football player,” Eldridge said. “Whether it’s in the opponents hands or in the air. It’s really instinctual for him being able to get the ball. He’s been involved with so many turnovers whether it’s Pick-6, he had a strip TD. He’s got really, really good speed.”

Vayson, who didn't play football as a sophomore, hasn’t received college interest in this covid-19 season.

“This year has been really crazy recruiting wise,” Eldridge said. “It seems like even Division I … I don’t know it’s seems like they’re later on everybody. I could be wrong about that but to me Davian’s upside I mean he didn't play last year. His upside is just phenomenal as far as not having an offseason with him yet. I think he’s going to gain a lot of muscle mass and continue to get faster.”

He’s also an excellent student and leader of the team.