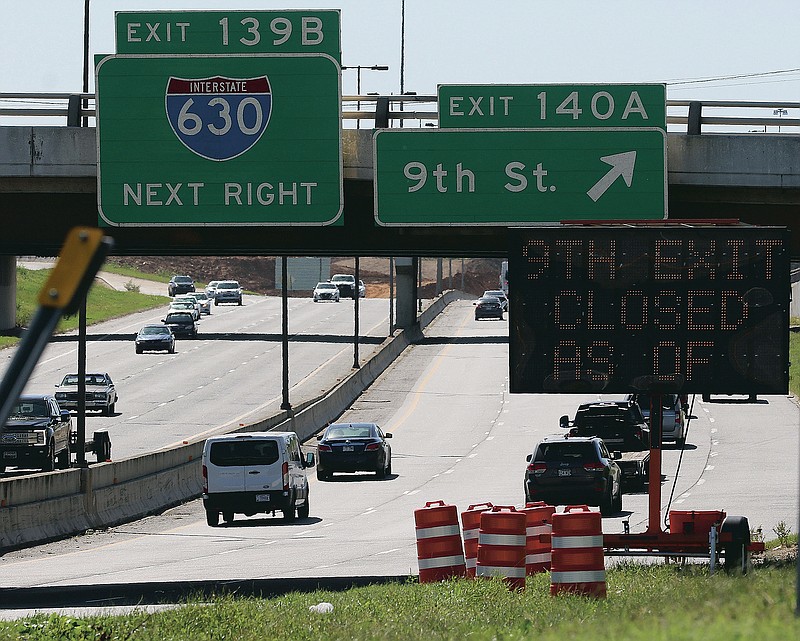 The westbound I-30 off-ramp to Ninth Street, Exit 140A, in Little Rock has been permanently closed as of Tuesday, Oct. 13, 2020. The closure is part of the 30 crossing project. Also, on Wednesday, the Ninth Street on-ramp to westbound I-30 will be closed until the middle of next year. (Arkansas Democrat-Gazette/Thomas Metthe)

The Arkansas Department of Transportation is using a mix of federal money and regular state matching funds to pay for work on 30 Crossing, the agency's top official said Monday.

The first phase of the project to remake the 6.7-mile corridor through downtown Little Rock will cost $632 million. About $180 million is accounted for with the federal money and the state money needed to match it.

"These funds are now being used for all expenditures including contractor payments," department Director Lorie Tudor said in a prepared statement.

Tudor's comments were in response to a lawsuit filed last week seeking to halt work on 30 Crossing until the agency can "clearly demonstrate the projects can be completed without violating an Oct. 29 ruling by the Arkansas Supreme Court."

The state's high court ruled that Amendment 91 to the Arkansas Constitution prohibits the 0.5% statewide sales tax collected under the amendment to be used on highways wider than four lanes.

Amendment 91, approved by voters in 2012, made possible the department's $1.8 billion Connecting Arkansas Program, an initiative focusing work on regionally significant projects, including 30 Crossing.

Most of the work is being done on roads that are four lanes or fewer. There are exceptions, including 30 Crossing and a $187.3 million project to widen a 5.5-mile section of I-30 in Saline County to six lanes from four. The section runs between Benton and U.S. 70 and crosses the Saline River.

The lawsuit filed last week on behalf of a coalition of downtown Little Rock neighborhoods and residents also wanted work stopped on the I-30 project in Saline County. Tudor said the department would continue to spend Amendment 91 money on that project.

"The Interstate 30 widening project in Saline County was not a part of the recent ruling from the Supreme Court," she said.

Tudor said 30 Crossing remains a critical project that the department is committed to completing.

"The project was promised to voters in 2012," she said. "When completed, it will significantly improve mobility for 120,000 vehicles per day – the highest traveled corridor in the state. It will also replace the Arkansas River Bridge and restore its structural integrity along with correcting the current navigational channel problems."

The department already has spent several million dollars for the contractor to stage personnel and equipment, including barge cranes on the Arkansas River. The figure was put at $25 million, according to testimony at an August hearing in federal court on a separate lawsuit challenging the project.

"Regardless of the source of funds, ARDOT is committed to moving forward with the project and we have no plans to suspend work," she said. "To suspend construction would come at a huge cost to taxpayers."

The price tag on the total project exceeds $1 billion, according to a department financial plan that was included as an exhibit in last week's lawsuit, which was filed by Richard Mays, a Little Rock environmental lawyer.

The agency originally identified $631.7 million available for the project -- which is known as 30 Crossing -- to remake the congested section of I-30, including $535 million for construction. That figure is known as a "planning level" estimate and developed in the early stages of planning for the project.

Several years later, the team that the agency selected to do the final design and build the project -- Kiewit-Massman Constructors, a joint venture -- put the price for all the work at nearly $1 billion at which point the department decided to build the project in phases.

In April, the Metroplan board of directors amended its transportation improvement plan to include an additional $350 million for the project, contingent upon voters approving Issue 1 on the November general election ballot. Issue 1 makes permanent the 0.5% statewide sales tax for road and bridge construction. Under Amendment 91, the tax is scheduled to expire in 2023. Voters approved Issue 1.