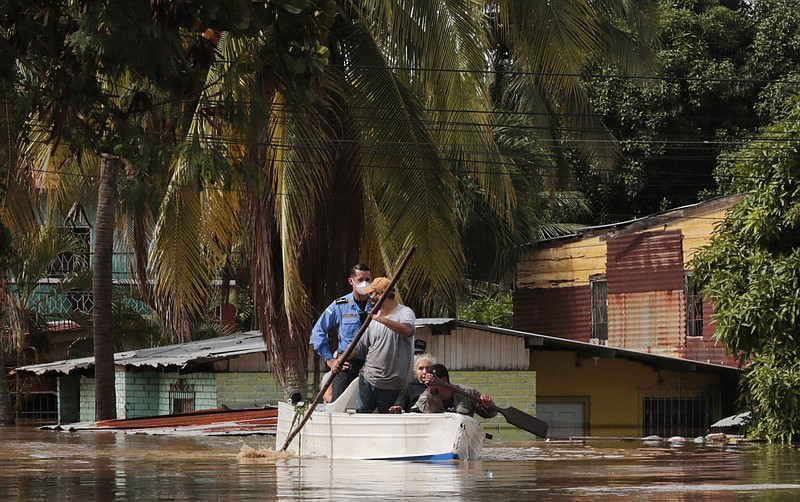 Residents paddle a boat through a flooded street in the aftermath of Hurricane Eta in Planeta, Honduras, Thursday, Nov. 5, 2020. The storm that hit Nicaragua as a Category 4 hurricane on Tuesday had become more of a vast tropical rainstorm, but it was advancing so slowly and dumping so much rain that much of Central America remained on high alert. (AP Photo/Delmer Martinez)

Iota had intensified into a Category 5 storm early Monday, but the U.S. National Hurricane Center said it weakened slightly by Monday night to Category 4, with maximum sustained winds of 155 mph. It was centered about 30 miles south of the Nicaraguan city of Puerto Cabezas, also known as Bilwi, and moving westward at 9 mph.

Iota was already hitting the Caribbean coasts of Nicaragua and Honduras with torrential rains and strong winds as the western edge of the storm began battering the Nicaraguan coast.

Authorities warned that Iota was projected to come ashore over areas where Eta's torrential rains saturated the soil, leaving it prone to new landslides and floods, and that the storm surge could reach 15 to 20 feet above normal tides.

[Video not showing up above? Click here to watch » https://www.youtube.com/watch?v=h44lMgvec3E]

In Wawa Bar, Jarquin said he found "total destruction." People had been working furiously to put roofs back over their families' heads, but now Iota threatened to take what was left.

"The little that remained standing could be razed," Jarquin said. There were other communities farther inland that he was not able to reach because of the condition of roads. He said he heard that Wawa Bar was evacuated again Saturday.

Evacuations were being conducted from low-lying areas in Nicaragua and Honduras through the weekend.

Limborth Bucardo, of the Miskito Indigenous ethnic group, said many people had moved to churches in Bilwi. He rode out Eta with his wife and two children at home, but this time decided to move in with relatives in a safer neighborhood.

Iota is the record 30th named storm of this year's extraordinarily busy Atlantic hurricane season. It's also the ninth storm to rapidly intensify this season, a dangerous phenomenon that is happening increasingly more often. Such activity has focused attention on climate change, which scientists say is causing wetter, stronger and more destructive storms.

Eta had hit Nicaragua as a Category 4 hurricane, killing more than 130 people as torrential rains caused flash floods and mudslides in parts of Central America and Mexico. Then it moved across Cuba, the Florida Keys and around the Gulf of Mexico before making landfall again near Cedar Key, Fla., and moving across Florida and the Carolinas.

Iota was forecast to drop 10 to 20 inches of rain in northern Nicaragua, Honduras, Guatemala and southern Belize, with as much as 30 inches in isolated spots. Costa Rica and Panama also could experience heavy rain and possible flooding, the hurricane center said.

The prospect of more rain was raising the anxiety of those still homeless after Eta.

On Monday, Carmen Isabel Rodriguez Ortez, 48, was still living inside a government shelter with more than 250 people in La Lima, Honduras, just outside San Pedro Sula.

"We're living a real nightmare," she said. The Chamelecon river flooded her Reformada neighborhood as Eta passed, submerging their homes. "Now they announce more rain and we don't know what's going to happen, because our homes are completely flooded."

Eta was this year's 28th named storm, tying the 2005 record. Remnants of Theta, the 29th, dissipated Sunday in the eastern Atlantic Ocean.

Over the past couple of decades, meteorologists have been more worried about storms like Iota that power up much faster than normal. They created an official threshold for this rapid intensification -- a storm gaining 35 mph in wind speed in just 24 hours. Iota doubled it.

This is the first time on record that the Atlantic had two major hurricanes, with winds exceeding 110 mph, in November, with Iota and Eta, according to Colorado State University hurricane researcher Phil Klotzbach. When Iota's top winds reached 155 mph, they tied with 1999's Lenny for the strongest Atlantic hurricane this late in the calendar year.

The official end of the hurricane season is Nov. 30.

Information for this article was contributed by Marlon Gonzalez, Seth Borenstein and Christopher Sherman of The Associated Press. 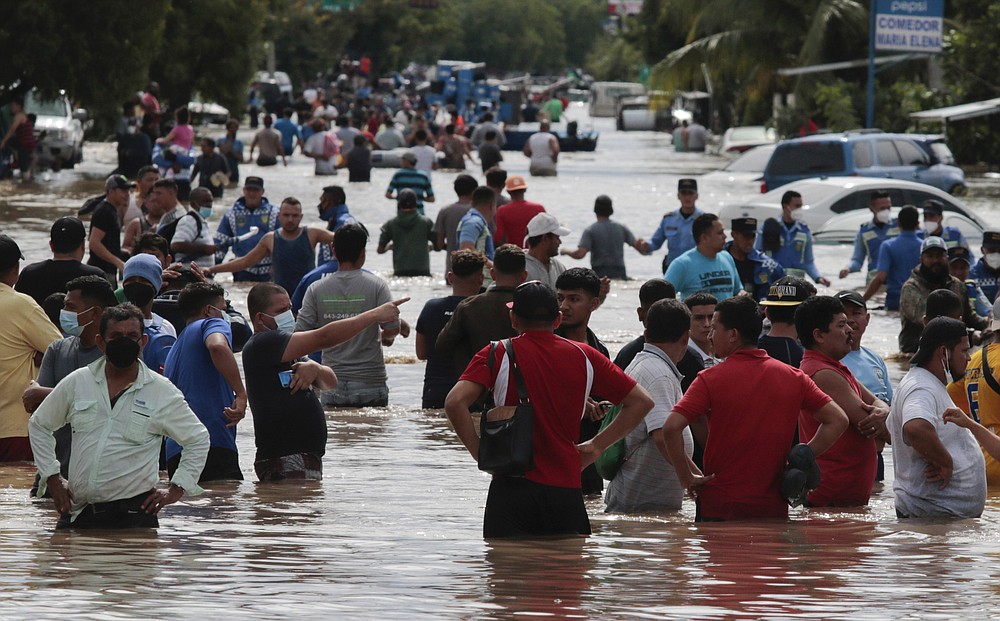 Residents wade through a flooded road in the aftermath of Hurricane Eta in Planeta, Honduras, Thursday, Nov. 5, 2020. The storm that hit Nicaragua as a Category 4 hurricane on Tuesday had become more of a vast tropical rainstorm, but it was advancing so slowly and dumping so much rain that much of Central America remained on high alert. (AP Photo/Delmer Martinez) 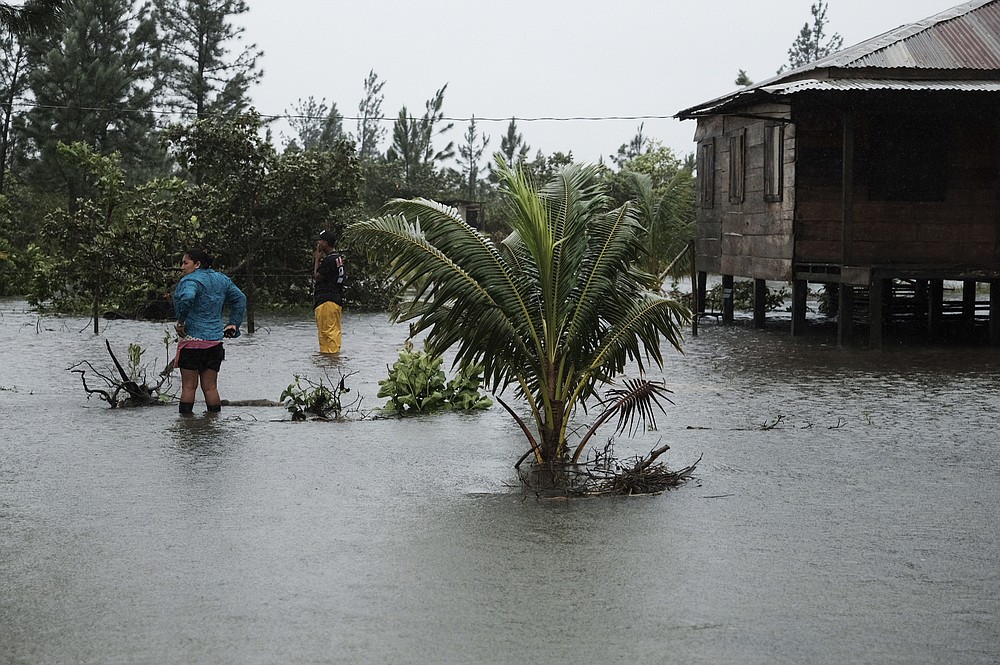 Residents stand outside a home surrounded by floodwaters brought on by Hurricane Eta in Wawa, Nicaragua, Tuesday, Nov. 3, 2020. Eta slammed into Nicaragua's Caribbean coast with potentially devastating winds Tuesday, while heavy rains thrown off by the Category 4 storm already were causing rivers to overflow across Central America. (AP Photo/Carlos Herrera) 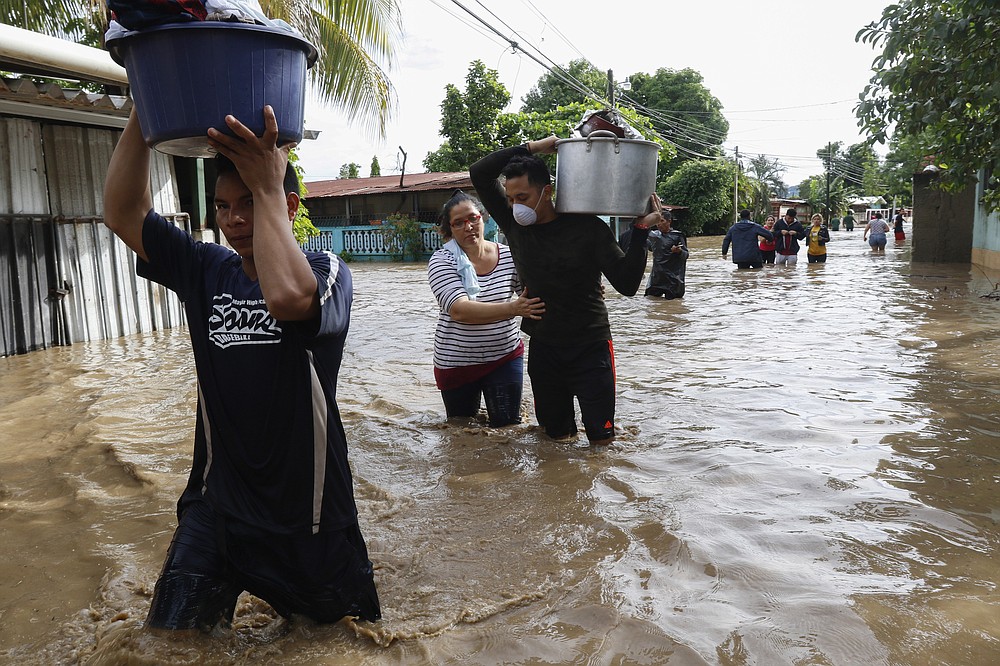 Residents wade through floodwaters carrying their belongings in the neighborhood of Suyapa, Honduras, Thursday, Nov. 5, 2020. The storm that hit Nicaragua as a Category 4 hurricane on Tuesday had become more of a vast tropical rainstorm, but it was advancing so slowly and dumping so much rain that much of Central America remained on high alert. (AP Photo/Delmer Martinez) 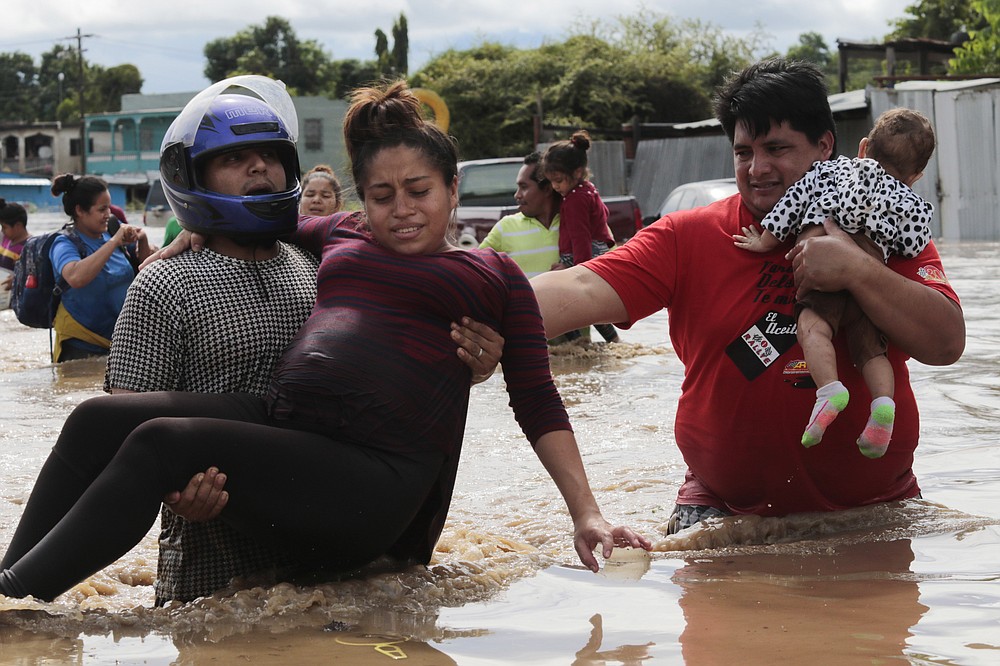 A pregnant woman is carried out of an area flooded by water brought by Hurricane Eta in Planeta, Honduras, Thursday, Nov. 5, 2020. The storm that hit Nicaragua as a Category 4 hurricane on Tuesday had become more of a vast tropical rainstorm, but it was advancing so slowly and dumping so much rain that much of Central America remained on high alert. (AP Photo/Delmer Martinez) 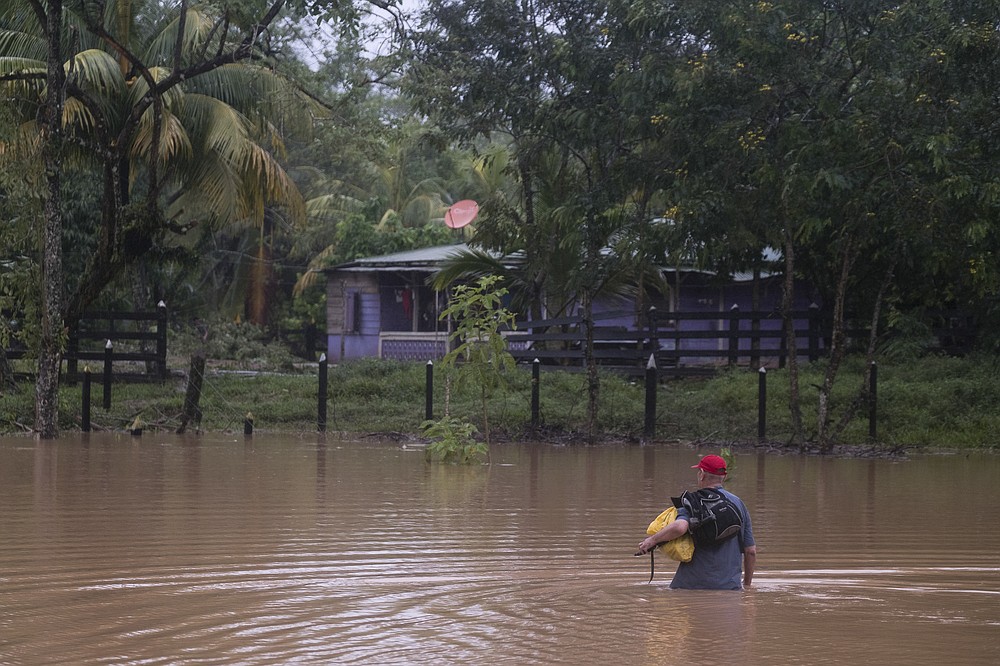 A man walks through a flooded road in Okonwas, Nicaragua, Wednesday, Nov. 4, 2020. Eta weakened from the Category 4 hurricane to a tropical storm after lashing Nicaragua's Caribbean coast for much of Tuesday, its floodwaters isolating already remote communities and setting off deadly landslides. (AP Photo/Carlos Herrera) 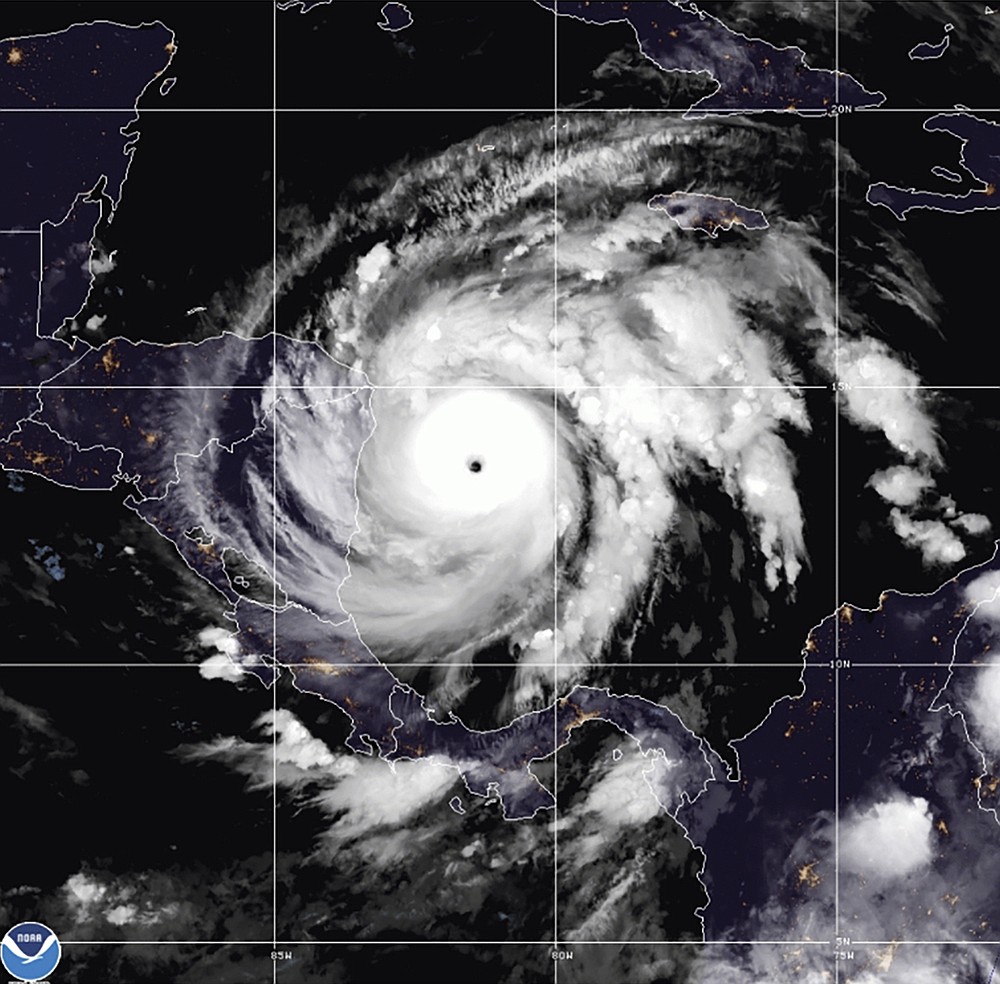 This satellite image made available by NOAA shows Hurricane Iota in the North Atlantic Ocean on Monday, Nov. 16, 2020, at 07:11 EST. (NOAA via AP)
ADVERTISEMENT