Call for firing results in rebuke of sponsor 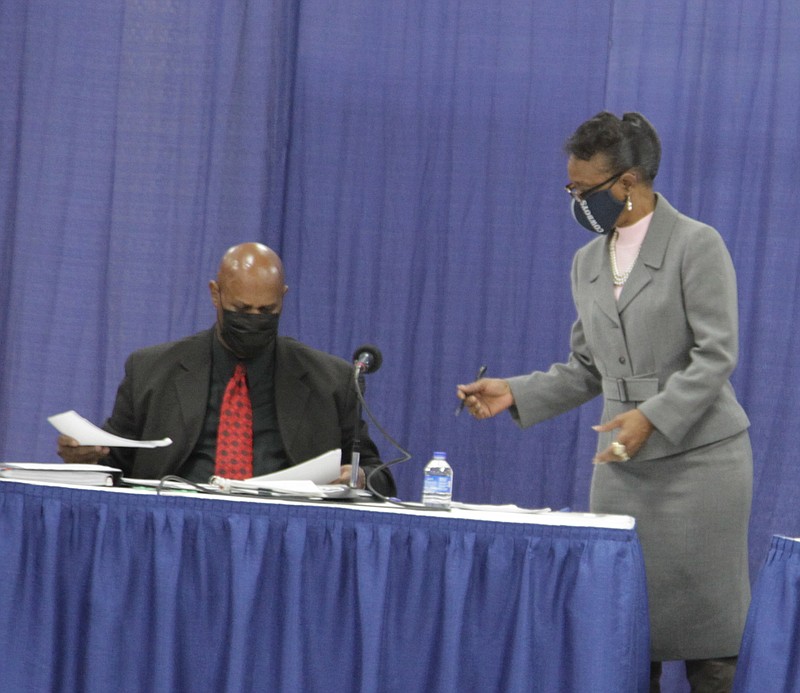 Alderman Steven Mays, left, looks over some papers handed to him by City Clerk Loretta Whitfield prior to Monday night's City Council meeting. Mays was roundly rebuked by other council members over two resolutions he had placed on the agenda without prior notice or consultation with any of the committees that oversee pending legislation. Resolutions, which are nonbinding, do not have to be vetted through committees. (Pine Bluff Commercial/Dale Ellis)

Ward 4's Steven Mays was roundly rebuked by his fellow council members Monday night over a resolution he proposed that called for a vote of no confidence in the leadership of the Pine Bluff Street Department and for Mayor Shirley Washington to fire department Director Rick Rhoden.

Mays outlined what he said are problems with the department and said that the condition of city streets are an embarrassment.

"You all travel these roads," Mays said to the council. "This is not a secret. You see the same things I see. I've been working with [Rhoden], we work good together, but we need to change direction. We're still running this city like 30 years ago. We have to do better."

Mays said he frequently receives calls from constituents about the condition of streets, many of which concern the same spots over and over.

"I don't know if you all get calls like I do about the potholes, about the dips in the roads." he said, "Take 16th and Cherry. That's a dangerous dip going west on 16th and Cherry, you'll tear your car up right there. All I'm asking is that our road crews do a better job on the roads in the city of Pine Bluff."

Mays said that he and Rhoden and the rest of the city leadership work together well, "but we can do better."

Council Member Glen Brown Jr. -- who, along with Mays and Bruce Lockett, serves on the Public Works Committee -- agreed that the streets are in disrepair and need to be more effectively addressed, but he chided Mays for his approach of presenting a resolution to the council demanding such a drastic change without vetting it through committee first.

"There's one thing to say we need to address some issues," Brown said. "There's another thing to say that we want a man to lose his job because of it. There's a way to handle the issues that you have with the Street Department without asking for someone's job."

Brown said that many avenues exist to address problems more effectively without resorting to a resolution to change out the leadership of the department, which Brown characterized as inappropriate, especially considering the issues he said the Street Department has faced.

"I think we have the opportunity, we have his cellphone number so we can call him and express our concerns," Brown said. "One of the big problems he's having over there is staffing. He doesn't have enough people to do all the work that needs to be done. You say we're being reactive and not proactive, well, sometimes we have to be reactive because we don't have enough staff to be proactive."

"They have a lot on their plate and sometimes you don't have enough manpower to stretch across all those different tasks," he said. "I really don't like seeing things like this in my packet. I feel like there's a better way to resolve issues than this."

"No way would we do this to any city employee," Lockett said, "not a department head or other would we do such a thing as this. But I do believe as the chairman of Public Works I have a duty to tell people that Public Works is open to all people; employees, citizens, elected officials, anybody who has an issue with the Street Department please direct them to the Public Works Committee and we can work those things out."

"I just want to say that I think it's completely inappropriate for this resolution to have hit our packet," echoed Council Member Win Trafford. "This is not the place for this discussion and any additional conversations we have on issues such as this certainly should be done in committee meetings and maybe one-on-one with the department head.

"I'm completely opposed to this," Trafford continued. "I'm actually embarrassed for our city that it came before us tonight."

"I concur with the alderman that this is frankly insulting," said Council Member Donald Hatchett. "In our Street Department, our problem isn't with leadership. Our problem is with funding. To fill the potholes, to do the ditches, and many other things that's done by a very hard working Street Department, to bring this to the council is embarrassing."

Council Member Joni Alexander said the city has neglected to provide city employees with an outlet to express their opinions without fear of retribution, which she said should be rectified. But even so, she said, she could not give the resolution her support.

"I think we have to allow the employees some type of an outlet that they can express their views on the climate and culture of their department and still be protected," she said. "A lot of them are not going to come to the meeting. A lot of them are not going to speak on the record, and I think we've failed on giving them a platform to address things in their departments so we can work together in building our departments from a culture standpoint."

"Now, you all ride the same roads that I ride on and the roads are embarrassing," Mays protested. "I know you're going to vote this down so what I'm going to do is pull it down."

However, as Mays attempted to pull the resolution from consideration, Washington insisted that it go up for a vote.

"I asked him to pull this many times before it went into the packet and he would not," Washington said to City Attorney Althea Hadden-Scott. "Now, he wants to pull it."

"He is the sponsor," Scott began, when Mays cut her off.

After the first round of votes, Washington called for a roll-call vote, and Mays was the only "yes" vote for the resolution.