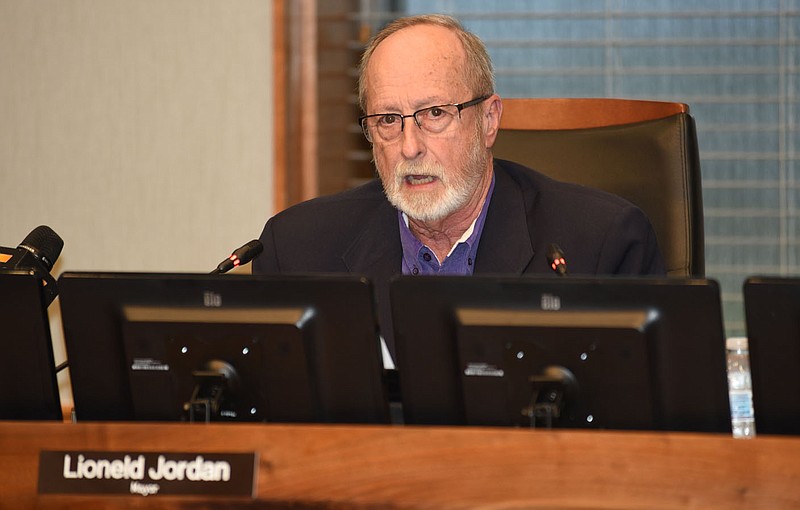 City of Fayetteville mayor Lioneld Jordan speaks during a press conference Wednesday, March 18, 2020, at City Hall about the first resident of Fayetteville with a presumptive case of covid-19. Check out nwaonline.com/200319Daily/ and nwadg.com/photos for a photo gallery. (NWA Democrat-Gazette/David Gottschalk)

FAYETTEVILLE -- The City Council unanimously passed a budget for next year with cuts made primarily to capital improvement, especially water and sewer projects.

The budget the council agreed to adopt Tuesday is about $15.7 million less than the budget adopted for this year. The meeting was held online on Zoom.

Chief Financial Officer Paul Becker said the city is looking at a volatile period as far as revenue because of the covid-19 pandemic.

Becker said he anticipates next year to be about the same as this year before it is hoped economic activity picks up by around 2022. The budget next year is set at about $171.8 million, compared with this year's $187.5 million adopted budget.

The goal is to keep the same level of services to residents and allow the city to run as efficiently and effectively as possible, Becker said.

The capital budget, which involves infrastructure projects such as roads, trails, city facilities and water and sewer lines, was reduced by nearly $14 million. Most of the reduction was in water and sewer projects and work at the city's two wastewater treatment plants. Last year, the city lined up about $22 million in the water and sewer capital budget to get started on years of deferred work because of a delay in federal and state permitting.

Sales tax revenue accounts for about 60% of the fund's revenue. The general fund is projected to operate on a $392,000 deficit next year, which will be covered in reserve money, Becker said.

Administrators intend to bring forward raises for city employees as soon as is feasible, Becker said. The City Council typically considers raises for city employees in spring using a mix of sales-tax revenue projection and available reserve money. However, the council tabled a raise package in March at the onset of the pandemic. Raises are reflected in the budget for the following year, so they did not appear in the budget the council approved Tuesday.

"I promise you we will see better times," he said.

One resident, Peter Tonnessen, spoke to the council during public comment and asked for the budget's approval to be held. He had questions related to the city's aid to the Fayetteville Public Library expansion and sources of revenue other than sales tax, and was critical of potentially giving city employees raises while workers in private business struggle.

Council member Kyle Smith praised the administration for not laying off employees and keeping them paid.

"I want to thank you all for working so hard through all of this to make sure we don't add to the unemployment rolls," he said.

• Accepting a $2 million federal grant to build an access road in the city’s industrial park. The city’s matching portion is $500,000.

• Selling an easement for a road to a water tower on Markham Hill for $10,586 to Specialized Real Estate Group, who is developing the land.

• Rezoning about 3 acres northeast of Zion Road and Randal Place from apartments and offices to a mix of residential and commercial uses.