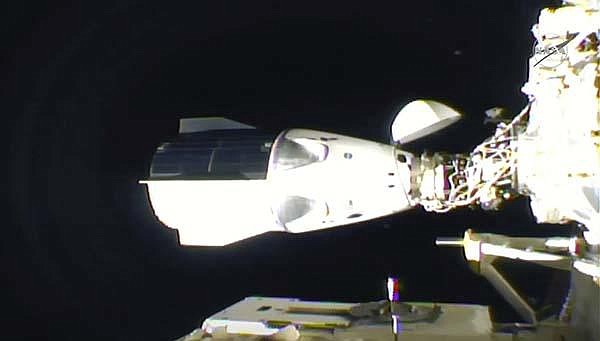 In this frame grab from NASA TV, the SpaceX Dragon sits docked at the International Space Station late Monday. (AP/NASA)

The Dragon capsule pulled up and docked after a 27-hour, completely automated flight from NASA's Kennedy Space Center.

This is the second astronaut mission for SpaceX. But it's the first time Elon Musk's company delivered a crew for a full half-year station stay. The two-pilot test flight earlier this year lasted two months.

The three Americans and one Japanese astronaut will remain at the orbiting lab until their replacements arrive on another Dragon in April.

Hopkins and his crew -- Victor Glover, Shannon Walker and Japan's Soichi Noguchi -- join two Russians and one American who flew to the space station last month from Kazakhstan.

The traditional parades are held every year to mark the carnival season. Mardi Gras, or Fat Tuesday, falls on Feb. 16 next year.

The mayor's office has put out a call for ideas on how to "safely celebrate the carnival season" without any parades. Submissions must comply with social distancing and sanitation standards, and "prevent unstructured crowds of strangers," the mayor's office says on its website.

Canceling all of the city's Mardi Gras parades, which typically begin in January and culminate on Fat Tuesday, could greatly reduce the number of revelers who visit New Orleans for the holiday. A typical Mardi Gras draws about 1 million visitors from around the world and has a direct economic benefit of about $144 million for the city, according to NOLA.com.

In 2020, Mardi Gras took place on Feb. 25, shortly before the coronavirus outbreak was declared a global pandemic, and two weeks before Louisiana had its first known coronavirus case. Cantrell's office has since then criticized the federal government's response to the pandemic.

LOUISVILLE, Ky. -- A Kentucky man accused of shooting two police officers during demonstrations over the killing of Breonna Taylor has been indicted on 35 charges.

He's being held on $1 million bond and is scheduled for arraignment on Monday.

Johnson was accused of shooting at police officers on Sept. 23 during protests held after a grand jury process produced no charges involving the shooting of Taylor by police. Instead, prosecutors announced that a single officer had been indicted on charges of wanton endangerment for firing into a home next to Taylor's.

SEATTLE -- A federal judge in Seattle has awarded $10 million to the family of a severely disabled child who was born after a community clinic nurse inadvertently gave the mother a flu shot instead of a birth-control injection.

U.S. District Judge Robert Lasnik last week awarded the child $7.5 million for her medical, educational and other expenses, on top of $2.5 million in damages for her parents, the Seattle Times reported.

After a trial earlier this year, Lasnik found that the mother, Yeseni Pacheco, did not want to become pregnant and would not have become pregnant in 2011 if the nurse at the Neighborcare Health clinic had given her the correct shot.

The federal government is responsible for the damages because the clinic, which serves low-income and uninsured patients, is federally funded.

The family's lawyers, Mike Maxwell and Steve Alvarez, described the case as a "wrongful pregnancy" and "wrongful life" case. They criticized the government for refusing to accept responsibility.

The child, now 8 years old, suffers from a birth defect known as bilateral perisylvian polymicrogyria, which has resulted in cognitive delays, slowed speech and language skills, epilepsy, vision problems and other complications. Maxwell said the girl will live a normal life span and will require some level of care and assistance for her entire life.