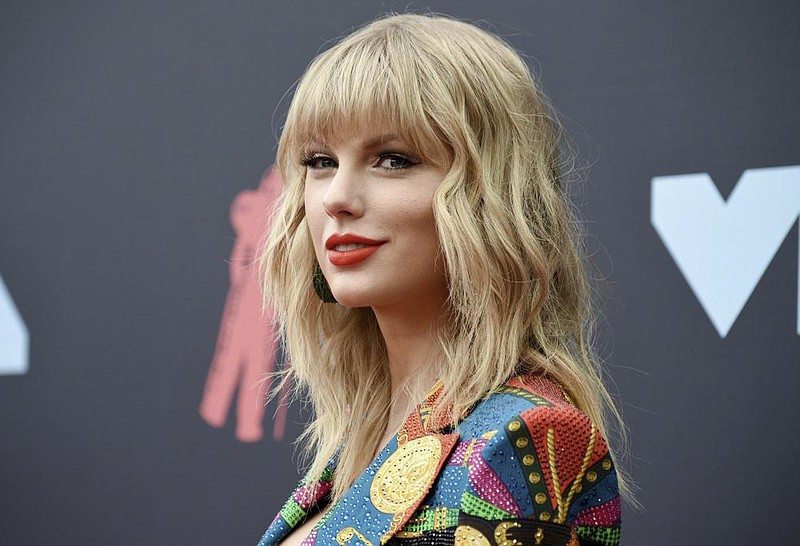 FILE - Singer-songwriter Taylor Swift arrives at the MTV Video Music Awards in Newark, N.J. on Aug. 26, 2019. Swift was nominated for four American Music Awards on Monday, Oct. 26. She has the chance to extend her lead as the most awarded artist in AMA history. She already has 29 wins. The AMAs will air on Nov. 22 on ABC. (Photo by Evan Agostini/Invision/AP, File)

• Recording star Taylor Swift is hoping that a $300 million deal by Scooter Braun to sell the catalog of her first six albums to a private equity firm means she is free from the record executive who had owned 11 years of master recordings against the pop star's wishes. Swift publicly lashed out last year at Braun after he purchased her former recording label, Big Machine, claiming that he was guilty of "incessant, manipulative bullying" and that she hadn't been consulted on his purchase of her music rights. But, Swift is still fuming over the news that Braun would still profit off her work under the terms of the deal as she has begun rerecording the six albums in an attempt to regain independence from the executive whose name alone regularly left her in tears. As first reported by Variety, the value of Shamrock Holdings' new deal could eventually reach as high as $450 million. Swift, one of the bestselling artists of all time, said that she had hoped to bid on the master recordings herself, but that she was told she would have to sign a nondisclosure agreement, which the 30-year-old artist declined. Representatives of Braun did not immediately respond to requests for comment. While she praised Shamrock for reaching out to try to broker a partnership, Swift maintained that any relationship the firm had with Braun, 39, was a nonstarter. Even while lamenting the sale of the master recordings, Swift called going back to rerecord her older music "exciting and creatively fulfilling," promising to "have plenty of surprises in store" for fans. "I can't wait for you to hear what I've been dreaming up," she said. "I love you guys and I'm just gonna keep cruising, as they say."

• Conan O'Brien is ending his late-night talk show to host a weekly variety series for HBO Max, underscoring the shifts in the television industry. One of the longest-tenured hosts in U.S. late-night TV, O'Brien will wrap up his self-titled show in June, the culmination of its 10th season on TBS. O'Brien, a former writer for "Saturday Night Live" and "The Simpsons," has been a late-night host for 28 years in total. He started as a replacement for David Letterman at NBC, and was named Jay Leno's successor at the "Tonight Show" for seven months -- before Leno decided to reclaim his old show. Having rescued O'Brien from a toxic situation at NBC, AT&T Inc.'s WarnerMedia will now ask O'Brien to figure out what a variety show looks like on the internet. While streaming services have struggled to find a recipe for topical humor programs, HBO has found success with a weekly show from John Oliver, a former contributor to "The Daily Show." "I'm thrilled that I get to continue doing whatever the hell it is I do on HBO Max, and I look forward to a free subscription," O'Brien said in a statement.