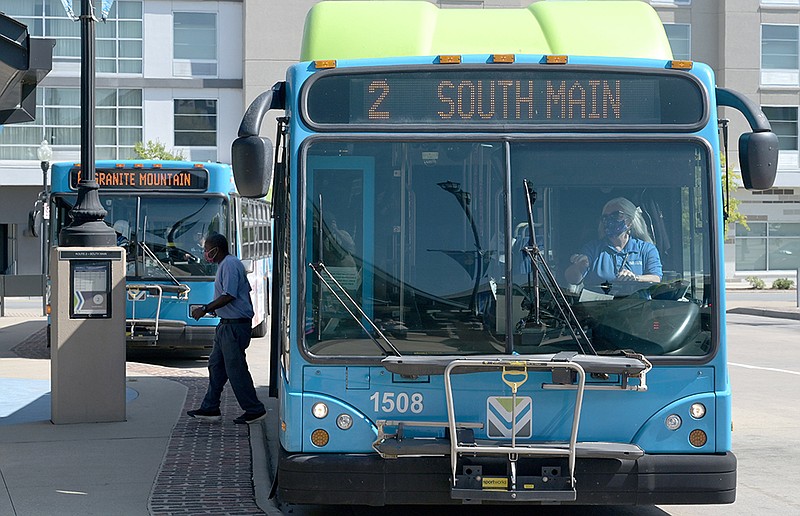 Riders wait to board their bus at the River Cities Transit Center in Little Rock on Tuesday, Aug. 25, 2020. Rock Region Metro board of directors met at noon to consider adopting RIDE 2020, a proposed overhaul of the regular bus ours that will see under-performing routes dropped with resources shifted to more popular routes that will allow more frequent stops and expand weekend service. (Arkansas Democrat-Gazette/Stephen Swofford)

Charles Frazier, who has guided Rock Region Metro for the past two years, received a $20,000 boost in his annual salary and a new job title.

His yearly pay will rise from $160,000 to $180,000 after the Pulaski County transit agency's board of directors voted in public at Tuesday's monthly meeting to provide Frazier the raise.

The vote also provided Frazier with a three-year contract through Dec. 31, 2023, and an increase in the agency's contribution to his deferred compensation plan. It will increase from $520.84 twice monthly to $729.17 twice monthly.

The vote was unanimous -- 12-0 -- and enthusiastic. Board members went beyond their typical "aye" vote in expressed their support for board member Michael Mason's motion to grant the raise.

The vote was preceded by a little more than 30 minutes of meeting privately to review Frazier's performance over the past year, which saw the agency overhaul its regular bus route system and draw up a new way to finance the agency in the midst of the coronavirus pandemic. The pandemic saw ridership plummet, two dozen employees furloughed for a time and at least four bus drivers test positive for the coronavirus.

Rock Region hopes to implement its new route overhaul by next spring or summer.

Called RIDE 2020, the plan drops underperforming routes and replaces them with on-demand microtransit vans, shifting resources to busier routes that will allow for more frequent stops, as well as expanded night and weekend service.

Little Rock and North Little Rock also will get new crosstown transfers, eliminating the need for riders to go downtown to make such transfers. The plan is designed to make transit service more efficient and accessible in a bid to attract new riders while remaining budget-neutral.

Frazier, a former Florida transit executive, began working for Rock Region in June 2018. He replaced Jarod Varner, who left in August 2017 after four years at the helm. The $160,000 salary was his initial starting pay.

"Thank you," he said after the vote. "I love working here in Central Arkansas and serving our community, and I love Rock Region Metro. I appreciate the opportunity to continue my service."

Frazier's title until now has been executive director. As part of Tuesday's board action, he now is the chief executive officer for Rock Region.

Frazier's new title is "the more common title among lead transit professionals who are reporting to boards of directors at peer transit authorities," said Becca Green, the spokeswoman for Rock Region.