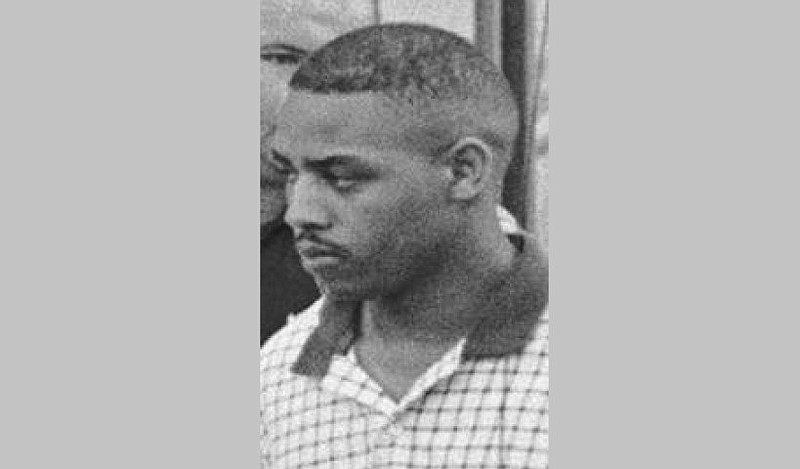 Orlando Hall is led from the Union County Courthouse in El Dorado after a court appearance on kidnapping charges in this Sept. 30, 1994, file photo. (El Dorado News-Times, AP / Joe Knor )

LITTLE ROCK -- A federal appeals court early Wednesday refused to delay the scheduled executions of two prisoners, including an Arkansas man who's execution is set for today, but allowed litigation seeking to modify the Justice Department's lethal-injection procedures to continue.

Attorneys for 13 prisoners -- including two scheduled executions this month and next -- told the U.S. Court of Appeals for the D.C. Circuit this week the drug the government uses, pentobarbital, causes "excruciating pain and suffering before dying" when not paired with a separate pain-relieving drug, in violation of the Eighth Amendment prohibition against cruel and unusual punishment.

A divided three-judge circuit panel ruled a lower court was wrong to toss out a challenge by death row inmates Orlando Hall of Pine Bluff and Brandon Barnard of Texas, finding the inmates alleged a "plausible" Eighth Amendment claim the government's methods involve unnecessary, severe and tortuous pain that could be avoided by adding a pain-relieving injection.

The unsigned order declined to stay the men's executions, however, saying the U.S. Supreme Court on July 14 ruled under similar circumstances another prisoner failed to show he was likely to succeed on a constitutional argument. That prisoner, Daniel Lewis Lee, who received the death sentence for the 1996 murders of an Arkansas couple and a young girl, was executed later that day.

In a separate opinion, dissenting in part, Judge Cornelia Pillard said she would have put the executions on hold until the government complies with the statutory requirement it must have a prescription to use pentobarbital.

For example, the judge wrote, if the government chose to execute plaintiffs by firing squad, and federal law required members be certified marksmen, the government couldn't simply ignore the law.

In dissent, Rao disagreed prescription requirements of the Federal Food, Drug & Cosmetic Act apply to drugs administered for capital punishment and asserted prisoners had no authority to challenge its nonenforcement.

The panel's ruling, which can be appealed to the Supreme Court, means the government can continue to do executions as it has since July.

An attorney for the prisoners, Jonathan Meltzer, said they would immediately appeal.

Hall received the death penalty for the 1994 kidnap, rape and murder of a 16-year-old Texas girl.

Hall, now 49, was one of five men who kidnapped Lisa Rene from her home in Arlington, Texas. Authorities said the group wanted revenge against Rene's brother over a botched drug deal. The men kept the girl alive for two days before taking her to Arkansas, repeatedly raping her, beating her with a shovel and burying her alive, authorities said.

A jury convicted Hall of kidnapping involving homicide, conspiracy to commit kidnapping and other charges. He was sentenced to death for the first charge.

One of Hall's four accomplices, Bruce Webster, 47, also was sentenced to death for his crimes; he remains on death row, according to Federal Bureau of Prisons records.

Bernard, set for execution Dec. 10, was convicted of killing two youth ministers on a Texas military reservation in 1999. One of his accomplices was executed for his role in the murders in September.

A third death-row inmate, Lisa Montgomery, is scheduled to be executed Dec. 8. Montgomery, who would be the first woman executed by the U.S. government in nearly 70 years, isn't part of the lawsuit.

The ruling comes as part of a broader challenge to federal execution procedures that has so far been unsuccessful. The Supreme Court this summer declined a flurry of legal challenges to the Justice Department's plans to resume federal executions. That cleared the way for the Trump administration to carry out seven lethal injections since July, more than the total number of executions the federal government had carried out over the previous three decades.

The Justice Department argued the latest claims were a delaying tactic and noted the justices have allowed the other executions following the same procedures.

"Hall and Bernard were both sentenced to death over two decades ago for exceptionally brutal crimes; their convictions and sentences have repeatedly been upheld; and their challenges to the protocol have received an extraordinary amount of judicial review over the past year," said the court filing from the government lawyers.

"There is no logical or equitable basis to delay their executions when seven other federal executions -- including that of Bernard's co-defendant -- have been allowed to proceed under the same challenged protocol at earlier stages of this litigation."

The Federal Bureau of Prisons is required by law to obtain a prescription before administering a controlled substance, the lawyers say, and the drug should be paired with a pain killer to avoid gratuitous harm.

The Justice Department disputes the assertion prisoners experience the near-drowning sensation known as "pulmonary edema" while still aware and conscious.

Government lawyer Melissa Patterson told the D.C. Circuit Monday the prisoners should not be able to "grind all lethal injections to a halt" because of a failure to include a prescription.

U.S. District Judge Tanya Chutkan in Washington found the government is violating the law by administering the pentobarbital without a prescription. But she declined to issue an injunction, saying in part she was bound by previous Supreme Court rulings.

Chutkan said she could not consider the case "in a vacuum" and the Supreme Court had in a previous case already addressed "most of the evidence Plaintiffs have presented in this case and found that it was not enough to warrant injunctive relief."

In July, the Supreme Court overturned an earlier order from Chutkan, and in a 5-4 opinion said prisoners on death row had "not made the showing required to justify last-minute intervention."

Information for this report was provided by Ann E. Marimow, Spencer S. Hsu and Mark Berman of the Washington Post, and Tony Holt of the Arkansas Democrat-Gazette.