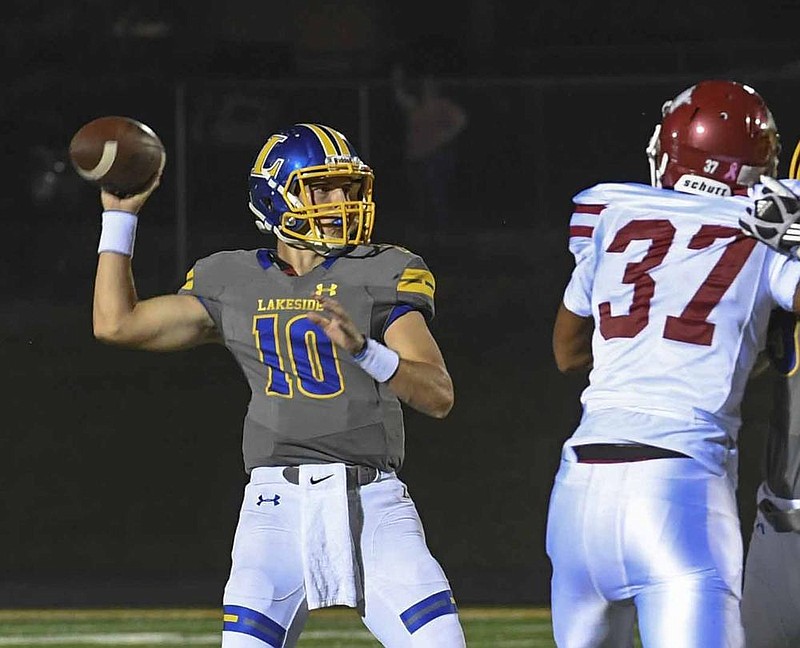 Hot Springs Lakeside quarterback Will Ross has completed 114 of 181 passes this season for 1,377 yards and 15 touchdowns to lead the Rams to a 6-3 record and the 5A-South’s No. 1 seed for a second consecutive season. (The Sentinel-Record/Grace Brown)

Hot Springs Lakeside is the 5A-South Conference's No. 1 seed for a second consecutive season.

Offense is a big reason why.

"We've been consistent," Lakeside Coach Jared McBride said. "We've been better offensively. We have to continue to get better."

Senior quarterback Will Ross has completed 114 of 181 passes for 1,377 yards with 15 touchdowns and 4 interceptions to lead the Rams.

"He's a special guy and a special quarterback," McBride said. "He understands so much of what's going on. He can get in and get out of plays. He's been smart with the football."

"Logan is our leader," McBride said. "He's a matchup problem on the outside. He's unselfish. He's a tough football player."

Lakeside hosts Vilonia on Friday in the first round of the Class 5A playoffs.

Vilonia is coming off a 60-21 victory Friday over Watson Chapel in a play-in round game.

McBride said the Rams are looking forward to facing Vilonia and getting past the first round. That's something the Rams couldn't do a year ago when they lost to White Hall at home.

"Vilonia, it will be like having a top-tier conference opponent at home," McBride said. "We have to win and advance. Then, we'll have to do it again next week."

Fayetteville was on the verge of advancing to the Class 7A quarterfinals Friday night against Little Rock Central.

While trying to run out the clock, junior quarterback Bladen Fike took a knee on fourth down at the Fayetteville 12. Officials ruled that Fike's knee touched the ground with two seconds left. Little Rock Central went on to win 37-35 on Harry Wikoff's 29-yard field goal.

Fayetteville's final offensive play of the season received national attention Monday when ESPN analyst Randy Moss talked about the play during his "Come on, man!" segment.

During the segment, Moss was critical of Fike and the Bulldogs.

Fayetteville Coach Casey Dick told the Arkansas Democrat-Gazette on Wednesday that he did not see the segment live, but was made aware of it later Monday and was not happy with ESPN or Moss.

"I was pretty upset they would air that about a high school kid," Dick said. "It wasn't his fault. It was my fault. I hated that he's had to take the blame."

Dick elaborated on the play, saying that it was a mistake how the Bulldogs' final play unfolded, but that the team is attempting to move on from it. He said he will become a better coach because of the loss.

The former University of Arkansas quarterback praised Fike for his play this season and his attitude on and off the field.

"Bladen is a tough kid," Dick said. "He's been playing quarterback for a lot of years. He works very hard."

Fayetteville, which was the No. 2 seed in the 7A-West Conference, finished 4-6.

El Dorado lost two of its offensive starters in its playoff opener Friday, but the Wildcats marched on to the Class 6A quarterfinals with a 54-33 victory over Siloam Springs.

Senior quarterback Eli Shepherd took a shot on the sidelines in the second quarter, while sophomore wide receiver DeAndra Burns had an ankle injury on the Wildcats' opening kickoff return.

"They stepped up," El Dorado Coach Steven Jones said of Rester, Thomas and Bibby. "Everybody was in their right spots."

Jones added that Shepherd and Burns will return Friday at Lake Hamilton.

El Dorado (5-4), one of three teams left from the 6A-East Conference along with Sylvan Hills and Marion, takes on a Lake Hamilton (9-1) team that features two of the state's top running backs in Owen Miller and Tevin Woodley. It's a tough matchup, Jones said.

"Lake Hamilton is very good running the football," Jones said. "We have to get them in long down and distance plays. we have to wrap up and gang tackle them."

The winner of Friday's game will face Little Rock Parkview or Sylvan Hills in the quarterfinals.

Weaver went 16-28 at Russellville. The Cyclones finished 1-10 this season and were eliminated in the first round of the Class 6A playoffs Friday at Sylvan Hills.

During his tenure at Russellville, the Cyclones won one playoff game by defeating Jonesboro in the first round of the Class 6A playoffs in 2017.

Friday night's Little Rock Catholic-North Little Rock game will be televised live on KARZ-TV in Little Rock. KARZ broadcast five games earlier this season as part of its Fearless Friday TV package. The game is scheduled to kick off at 7 p.m. Friday. ... Van Buren won its first playoff game since 2010 a week ago in a victory over Jonesboro. The Pointers look to advance to the Class 6A semifinals with a victory at Marion on Friday in the quarterfinals. ... Wynne, the 5A-East Conference champion, will play its first game since Oct. 30 on Friday against Maumelle in the Class 5A quarterfinals. The Yellowjackets' regular-season finale Nov. 6 at Nettleton was cancelled because of Nettleton's covid-19 situation. Wynne went 9-0 overall in the regular season and 6-0 in the 5A-East, earning an automatic berth into the Class 5A playoffs instead of having to play in a play-in round game last week. ... After starting 8-0, Central Arkansas Christian lost two consecutive games to finish the regular season, falling to the 4A-2 Conference's No. 2 seed. The Mustangs were outscored 77-28 in losses to Bald Knob and Stuttgart. CAC (8-2) will host Crossett in a first-round game in the Class 4A playoffs Friday night. 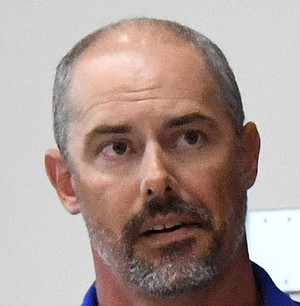 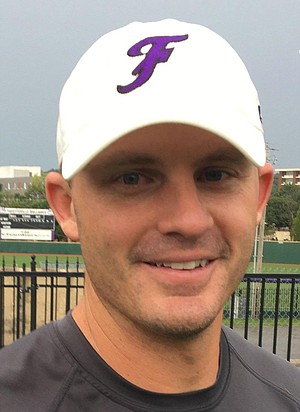