Nothing like the real thing: Domestic ducks teach hunter subtleties of calling 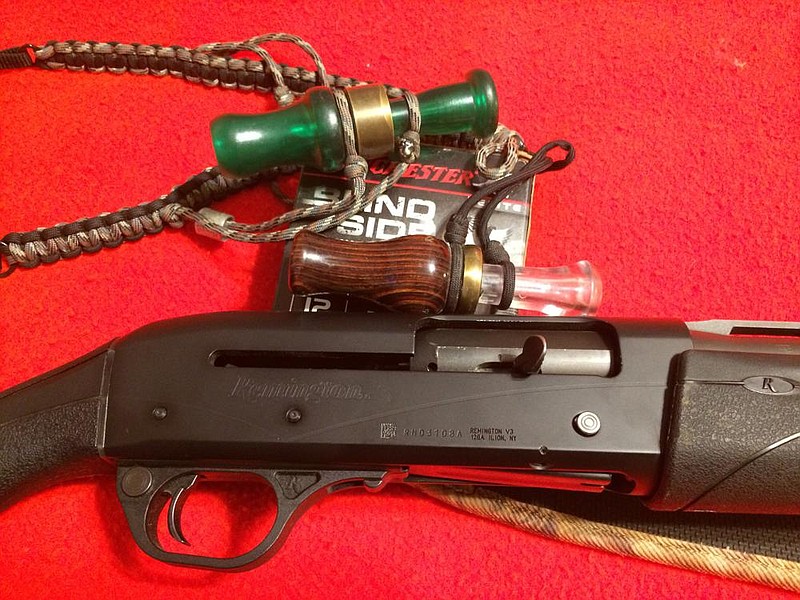 Listening and calling to domestic ducks has taught the author a lot about duck vocalizations, tone pitch and volume. (Arkansas Democrat-Gazette/Bryan Hendricks)

One of the most useful things to come to my little corner of Hot Spring County is a flock of ducks.

They belong to my daughter, who got into poultry in a big way last spring. She specializes in ducks. She has Pekins, Swedish Blues, Silver Appleyards, Welsh Harlequins, Aylesbury, Cayugas and Khaki Campbells.

She also had a call duck. It is an actual breed that was derived to serve as a live decoy during the market hunting era. It's a small duck with a very loud, shrill voice. You really can hear them from about a half mile away. The big ducks bullied her so badly that my daughter finally rehomed her to an avid duck hunter.

All of the other breeds are descended from mallards, which mean they talk like mallards. I have learned a great deal about duck vocalizations just sitting out by the duck pen listening to them, and they have changed the way I work a duck call.

I learned to call listening to my father. He was a very poor caller who made all the wrong sounds at all the wrong times. Had he swapped his OLT or Yentzen for a trumpet, he could have given Miles Davis or Louis Armstrong a run for their money. Even so, he still managed to land his share of ducks, which fooled me into thinking he did it right.

Through the years I learned a lot listening to competition callers at the World's Championship Duck Calling Contest in Stuttgart, which sadly will not be held this year. I covered 14 of those events. I memorized all the routines and picked up golden nuggets interviewing the winners.

I noticed something, though, on a hunt with John Stephens and Jim Ronquest, who won a combined four World's Championships. They don't call to real ducks the same as they do onstage. Neither do other excellent callers whom I know. Still, it's hard to get away from your schooling. It took only a few icy stares from companions after I flared ducks out of a hole to keep my calls in abeyance. Eventually I quit bringing them all together, knowing that chore was always in more capable hands than mine.

One of the best field callers I ever heard was a fellow named Harold Comstock. My brother and I joined him and a group of other hunters for a hunt at East Lake, adjacent to the White River National Wildlife Refuge. The group included a competitive caller and his young wife who called very well, too. A big flock of mallards worked the hole seemingly forever. They made pass after pass, but they would not commit.

"Watch this," Comstock said as he raised an ancient Yentzen to his lips. "I'm fixin' to aggravate my daughter."

Comstock blew about five or six notes. Those ducks braked so fast that they might have left skid marks in the air. They banked hard, turned into the wind, set their wings and landed without another moment's hesitation.

"That was freaking amazing!" I gushed. "All these high-tech, polymer calls, and this relic brought them home."

They also make social vocalizations that are quite similar, but ultimately a duck's world revolves around food. They made the droning cackle that we call the feed call when they finally get food. It's not really a call to dinner but a sound of satisfaction. "Mmmm, this is so good! Nom, nom, nom, nom!"

When the competition for food gets a little too stiff, or if one or two other ducks get greedy and cramp another duck's table, they throw out protest quacks.

Timing doesn't seem to be as critical with domestic ducks as it is with wild ducks. Domestic ducks call to demand satisfaction, and they do all the talking. Calling wild ducks is a sales job. Your objective as a caller is to first get their attention and then to look at your spread. Once they are interested, it is a delicate balance of timing and volume to persuade them to commit.

Nevertheless, I have spent a fair amount of time over the last few months calling to my daughter's ducks. I've noted to what they respond favorably and to what they don't like. I have learned to moderate my tone, pitch and volume, but mainly they've taught me how to communicate. The hard part will be carrying these lessons into the woods and not reverting to old bad habits.

For these reasons, a few domestic turkeys might be in our future, as well. My daughter really likes Bourbon reds. I like Royal Palms and Narragansetts. It doesn't matter. They all speak the same language.