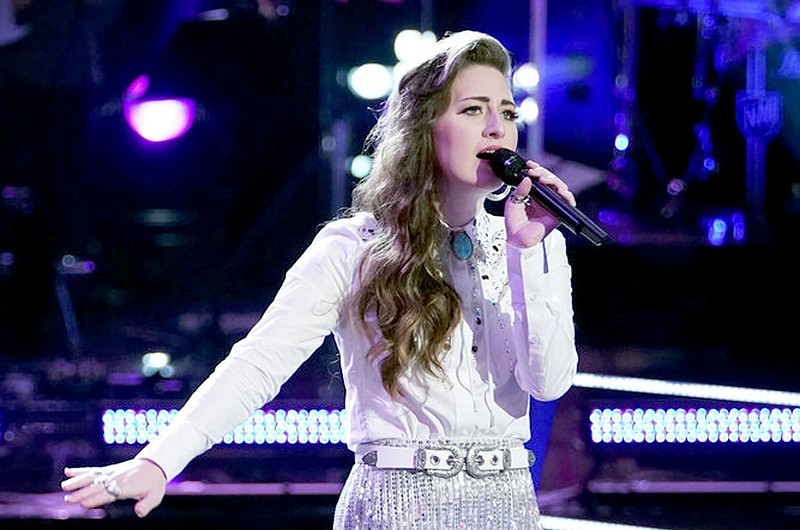 Tyler Golden/NBC Tori Miller of Siloam Springs performs on NBC's "The Voice." Miller sang a duet with Van Andrew during the battle rounds phase of the competition that aired Monday. Miller was eliminated and Andrew moved on.

SILOAM SPRINGS -- Tori Miller grew up watching NBC's "The Voice" at her family home in Siloam Springs and dreaming of one day standing on the stage.

On Monday, the 26-year-old had the surreal experience of watching herself perform on "The Voice" for a second time along with her new friends from Season 19 during the battle rounds phase of the competition.

Miller and her duet partner Van Andrew sang "Exile" by Taylor Swift. Andrew was chosen to move on in the competition but Miller was eliminated.

Despite the loss, Miller saw it as a full-circle moment.

"I thought I would get used to seeing myself and my friends on there but it's so surreal, it's like a dream come true. ... it was a neat full-circle moment," she said. "I reached my goal."

Miller was chosen by Gwen Stefani on Nov. 2 during the blind auditions phase of the show to join Stefanie's team for season 19. Miller sang "When You Say Nothing At All," by Keith Whitley for the audition.

Coaches Stefanie, Kelly Clarkson, John Legend and Blake Shelton each chose 10 musicians for their teams based solely on their voices. The coaches go on to guide their teams as they compete in the battle rounds, knockouts and finally live performances, according to the show's website.

Contestants are eliminated during each phase of the competition and in the end, only one will be named "The Voice" and will receive the grand prize of a recording contract, the site states.

Miller said she trained in Los Angeles for about two months for her appearance in the battle rounds. Miller and Andrew trained in a covid-safe room divided by Plexiglas, both on their own and with staging professionals and vocal coaches.

Miller also got to work with Stefanie and mentor Julie Michaels, both musicians she has long admired.

"That was just a crazy, crazy moment seeing two of your favorite mega stars sitting in front of you," she said. "It could be pretty intimidating, but they were normal people and super supportive."

The show's cast was isolated together because of the covid-19 pandemic so they became like a family during the two months Miller was there, she said.

"It was a really unique experience, I got to meet and know some really incredible people," she said.

After graduation from Liberty University, Miller went back to rodeo and in July 2014 she won first runner-up in the June 2014 Siloam Springs Rodeo Queen contest. In July of the same year, she went on to win the title of Miss Rodeo of the Ozarks in Springdale, which qualified her for the Miss Rodeo Arkansas competition, which she won in 2016.

Miller said her experience on "The Voice" has motivated her to get into the studio and record all the music she has been writing since the world shut down. She's teaming up with one of her best friends from "The Voice," Liam St. John from team Gwen, to play some gigs in Northwest Arkansas, including shows at The Park House Kitchen+Bar in Siloam Springs on Friday and Dec. 4, and at George's Majestic Lounge in Fayetteville on Dec. 18.

"I just want to say thank-you to my hometown and Northwest Arkansas for all the support and I hope to see everybody at one of the upcoming shows," she said.