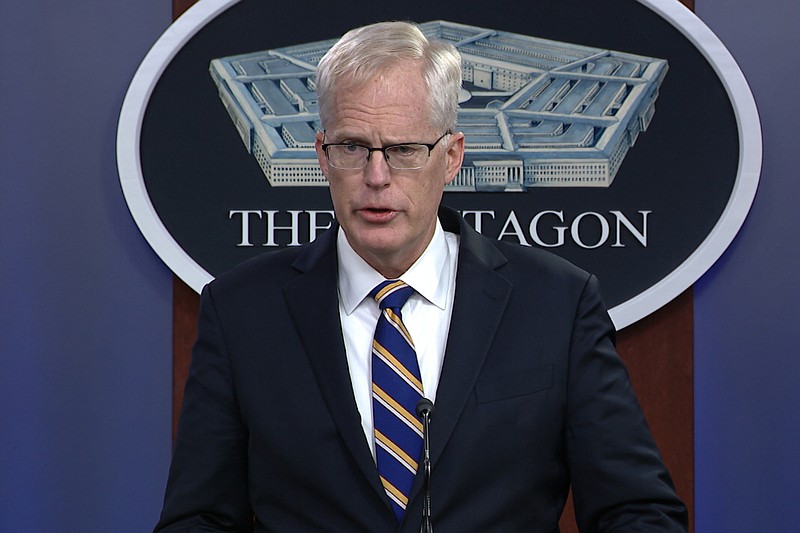 In this Tuesday, Nov. 17, 2020, image taken from a video provided by Defense.gov Acting Defense Secretary Christopher Miller speaks at the Pentagon in Washington. Miller said Tuesday that the U.S. will reduce troop levels in Iraq and Afghanistan by mid-January, asserting that the decision fulfills President Donald Trump’s pledge to bring forces home from America's long wars even as Republicans and U.S. allies warn of the dangers of withdrawing before conditions are right. (Defense.gov via AP)

WASHINGTON -- The coming period of U.S. troop withdrawals from Afghanistan and Iraq is "fraught with risk," but the military will not hesitate to strike back if extremists attempt to undermine the transition to a smaller U.S. force in those countries, the newly installed acting secretary of defense said Wednesday.

Speaking at Fort Bragg in North Carolina, Christopher Miller, who served in both Afghanistan and Iraq as an Army Special Forces officer, said President Donald Trump's order to cut the U.S. military presence to 2,500 troops in those countries by Jan. 15 was a step toward ending the wars responsibly.

Some members of Congress, including Republicans, have argued that the move is unwise or premature.

"Headlines about 'bringing the boys home' sound good, but that's not what's happening," said Sen. Ben Sasse, a Nebraska Republican and member of the Senate Intelligence Committee. "After this retreat, there will still be American troops in Iraq and Afghanistan. The most important question is whether those remaining troops will be able to prevent al-Qaida, the Islamic State, Iranian proxies, and others from plotting attacks that can spill American blood, or if they will be exposed as jihadis gain ground."

Chuck Hagel, a Republican who served as defense secretary in the Obama administration, said in an interview earlier this week that Trump should have left troop reduction decisions to President-elect Joe Biden, since the new administration will have to deal with the consequences of American troop withdrawals.

"It sends a clear signal to the Taliban" and strengthens their hand in negotiations with the Kabul government, said Hagel, who stressed that he favors finding a way to end U.S. military involvement in Afghanistan without sabotaging the government's chances of achieving a viable peace deal. "This is not going to end well for the Afghan government."

On Wednesday, two House members who are veterans of the wars in Iraq and Afghanistan -- Democrat Seth Moulton of Massachusetts and Republican Adam Kinzinger of Illinois -- sent a letter to Miller and Secretary of State Mike Pompeo requesting answers to numerous questions about the ramifications of Trump's decision, including how the troop pullouts will affect stability in Iraq and Afghanistan.

"We believe that there is strong bipartisan support from Congress and the administration for both Iraq and Afghanistan," they wrote. "Any premature drawdown without thoughtful consideration of the real-world conditions on the ground would be ill-advised. Additionally, we continue to be concerned by the growing [Islamic State] activity in Afghanistan and Iran's influence in Iraq."

Although the State Department has not announced a pullout of diplomatic personnel from either country this week in conjunction with Trump's announcement, there is concern in Congress that a substantial troop pullback could affect the security of the U.S. embassies in Baghdad and Kabul and the safety of embassy personnel.

Miller had announced Trump's troop-cut decision Tuesday at the Pentagon, and he elaborated on the plan at Bragg. He said the reductions would be done in a way that "protects our fighting men and women and our hard-earned gains."