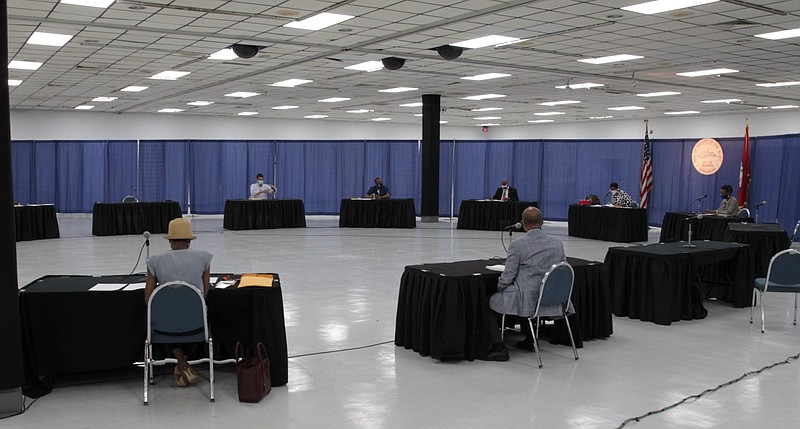 The Pine Bluff City Council meets at the Convention Center in this Arkansas Democrat-Gazette file photo.

As 2021 budget talks begin in earnest, some Pine Bluff City Council members have expressed trepidation at the numbers being tossed around by city officials, especially considering the level of financial uncertainty the covid-19 pandemic has spread throughout the nation.

City officials with the Administration and the Traffic and Aviation committees Thursday tackled the budget requests of several city offices, and those concerns rose to the forefront in several discussions.

Council members also balked at a couple of individual salary requests that fell outside of the city's commitment to fund salaries in accordance with a salary survey performed this year that compared city salaries with salaries of surrounding localities.

Otherwise, few concerns were raised as most of the budget requests for next year, outside of salary increases, had little change from the current year.

Alderman Glen Brown Jr. expressed his concern that council members had only just gotten their first look at the 2021 budget book and that he was worried that he and other aldermen might not have a chance to fully examine the proposed budget.

Finance Director Steven Miller noted that the difficulty in getting enough council members together to hold budget talks might be a factor in fully vetting the budget.

"I'm not saying that. I think the meetings are important because it gives them a chance to go through it with their respective committees," Brown said. "But I'll say this, the meetings were a little rushed because we just got the books on Monday, and I haven't had a good chance to look at it. In the future I'd like to have the book a week or so early so that we'll have a chance to schedule the meetings for the people who need to be a part of them."

Miller said normally his office tries to have the budget books ready by Nov. 1 but with several deadlines coming up regarding covid-19 grant funding and other disruptions related to coronavirus concerns, his office had fallen behind.

Walking the members through the mayor's office budget requests, Miller noted that the budget included salary increases related to the salary survey and a 3% cost-of-living increase, amounts that were standard across all city departments.

"Quickly walking through it, you're going to see the increase due to the salary survey and the 3% percent that you're going to see on all the departments," Miller said. "There were some little adjustments in expense; we had a little more money in data processing."

Brown then asked about a salary increase of 33.9% for a special projects coordinator in Mayor Shirley Washington's office.

"Is that reflective of the salary survey, or is there something else involved in that?" Brown asked.

Council members also questioned an almost $10,000 raise requested by the office of the Pine Bluff city attorney for the assistant city attorney, Joe Childers, whose current salary is about $70,000.

"He goes above and beyond and does more than what is actually called for in the position," said City Attorney Althea Hadden-Scott. "In addition to preparing ordinances and responding to the different boards and commissions, he is also responsible for communication with [the Department of Environmental Quality], as relates to economic and community development. If we have to exercise eminent domain or file for an easement, that is his responsibility."

Hadden-Scott noted that Childers' tenure in the city attorney's office, at 26 years, gave him a great deal of institutional knowledge that she felt was not recognized at his current salary level.

Even so, Miller said, all departments had been asked not to go above the salary survey's lower compensation level added to a 3% cost-of-living increase.

"If we move anyone else above midpoint to a higher salary, it's known that if you do it for one employee you'll get more requests," Miller said. "I'll go on record as saying that the city can't afford to pay midpoint. That's a $4.5 million increase, and that would lead the city toward bankruptcy."

Miller said the city had already factored in $6 million in casino revenue that were projected before the covid-19 shutdown, and he said the impact on that revenue is yet to be determined.

After the meeting, Miller said he doesn't think the city is in jeopardy financially, but he did urge caution in budgeting for the coming year.

"We've used up so much of the casino revenue that I think it'd be wise to wait for it to come in and see what we are going to get," he said.