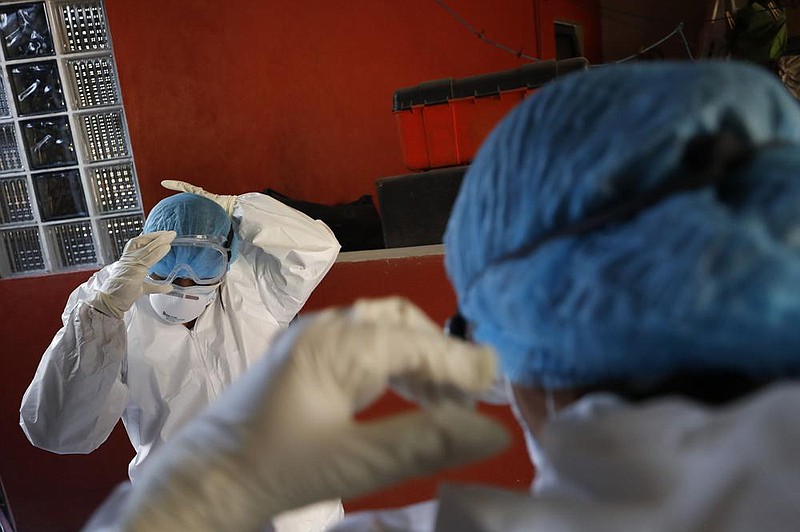 Doctors Delia Caudillo (left) and Monserrat Castaneda put on protective gear Thursday as they prepare to conduct a covid-19 test at a home in the Venustiano Carranza borough of Mexico City. (AP/Rebecca Blackwell)

MEXICO CITY -- Mexico passed the 100,000 mark in covid-19 deaths Thursday, becoming only the fourth country -- behind the United States, Brazil and India -- to do so.

Jose Luis Alomia Zegarra, Mexico's director of epidemiology, said there were 100,104 confirmed covid-19 deaths as of Thursday. The milestone was met less than a week after Mexico said it had topped 1 million registered coronavirus cases, though officials agree the number is probably much higher because of low levels of testing.

Mexico's living are bearing the scars of the pandemic along with their lost friends and loved ones. Many surviving coronavirus victims say the psychosis caused by the pandemic is one of the most lasting effects.

Mexico resembles a divided country, where some people are so unconcerned they won't wear masks, while others are so scared they begin to worry at the first sign of shortness of breath.

With little testing being done and a general fear of hospitals, many in Mexico are left to home remedies and relatives' care. Such is the case in the poverty-stricken Ampliacion Magdalena neighborhood on Mexico City's rough east side, where most people work off-the-books as day laborers at the city's sprawling produce market.

The busy market was the scene of one of the first big outbreaks in the greater metropolitan area, home to 21 million people, and so early on in the pandemic undertakers were swamped with corpses.

The funeral home "looked like a bakery, with people lined up, with hearses lined up," said community leader Daniel Alfredo Lopez Gonzalez. The owner of the funeral home told him some people waited to get bodies embalmed for burial while others were in the line to get their relatives' remains cremated.

The lack of testing -- Mexico tests only people with severe symptoms and has performed only around 2.5 million tests in a country of 130 million -- the lack of hospitals in many areas and the fear of the ones that do exist, has created a fertile breeding ground for ignorance, suspicion and fear.

Lopez Gonzalez described getting the disease himself. Even though he recovered, the fear was crushing.

"It is a tremendous psychosis. In the end, sometimes the disease itself may not be so serious, but it is for a person's psyche," Lopez Gonzalez said. "That is, knowing that you have a disease like this can kill you as bad as the disease itself."

Public-health outreach worker Dulce Maria Lopez Gonzalez -- Daniel Alfredo's sister -- nursed four members of her family through covid-19, relying on phone-in advice and medications from a doctor who was caring for his own relatives.

Her first brush with the pandemic's psychological effects were her own fears that her job as a health worker might have exposed her to it.

"I can't breathe," she remembers thinking. "And I said to myself, no, it is a psychological question."

She forced herself to calm down, noting: "If I get worked up thinking I have the disease, that I am going to die, then I am going to have a heart attack."

Her second brush with its effects involved her relatives' decision to ride out the disease at home. She had to desperately search for ways to get scarce and expensive medical equipment.

"There came a point when I said no, I can't do it," Lopez Gonzalez said.

The final straw was when her husband, spared in the first round of infections, had what appeared to be a panic attack in a taxi, thinking he had been infected and couldn't breathe.

"He started to enter a sort of state of psychosis in which he thought he had the disease, and it probably could have given him a heart attack," she said.

Still, they were terrified of government hospitals.

"It is really like a cycle of terror," she noted. "We were afraid to go to a hospital after everything you hear on social media. It was an enormous psychosis."

But Lopez Gonzalez, whose job involves handing out free surgical masks to residents, has also seen the other side of the psychological maelstrom: those who don't care.

"I saw this person who I had given a mask to, and I told her she shouldn't be outside without it," she recalled. "She told me that no, nothing was going to happen to her. Two weeks later we found out she had died of covid."

He criticized the media for "being alarmist" in focusing on the figure, in the same way he has criticized those who suggest the government is undercounting the deaths, those who have questioned the country's low testing rate or the government's contradictory advice on using masks.

"The epidemic is terrible in itself, you don't have to add drama to it," said Lopez-Gatell, suggesting some media outlets were focusing on the number of deaths to sell newspapers or spark "political confrontation." 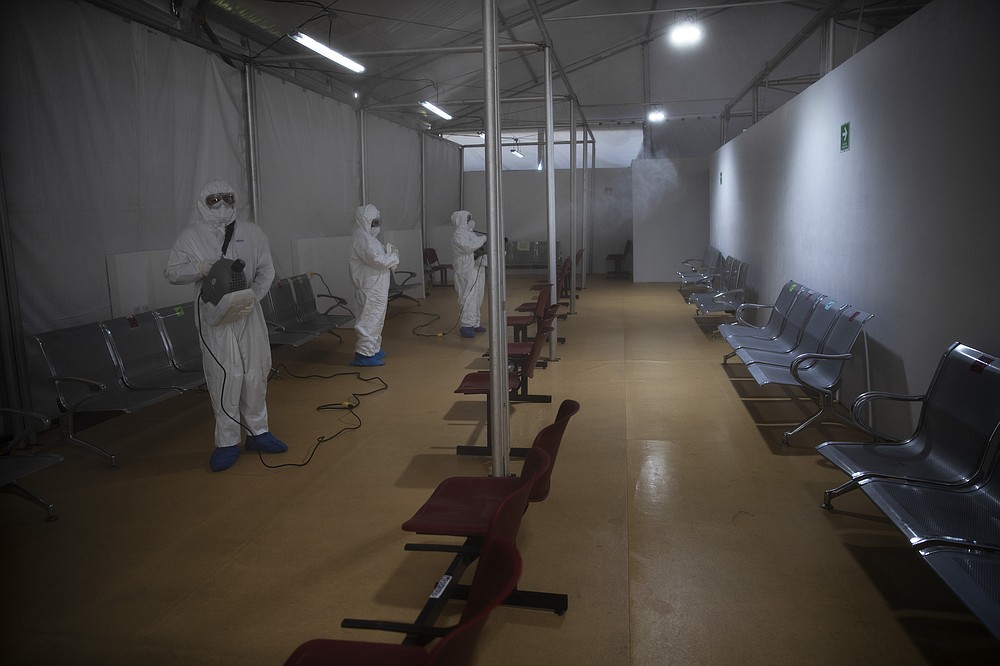 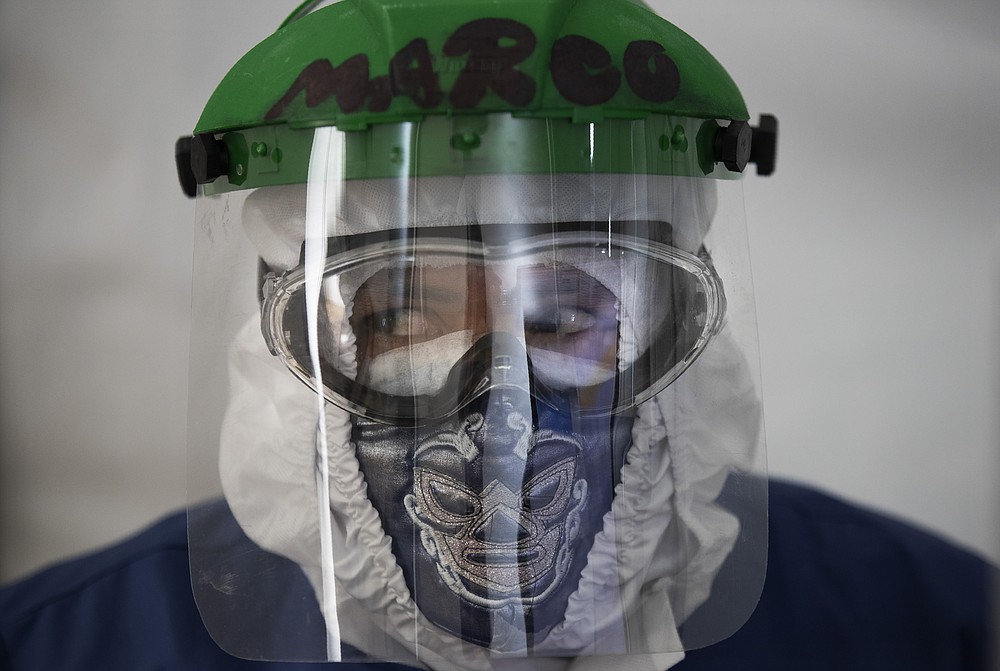 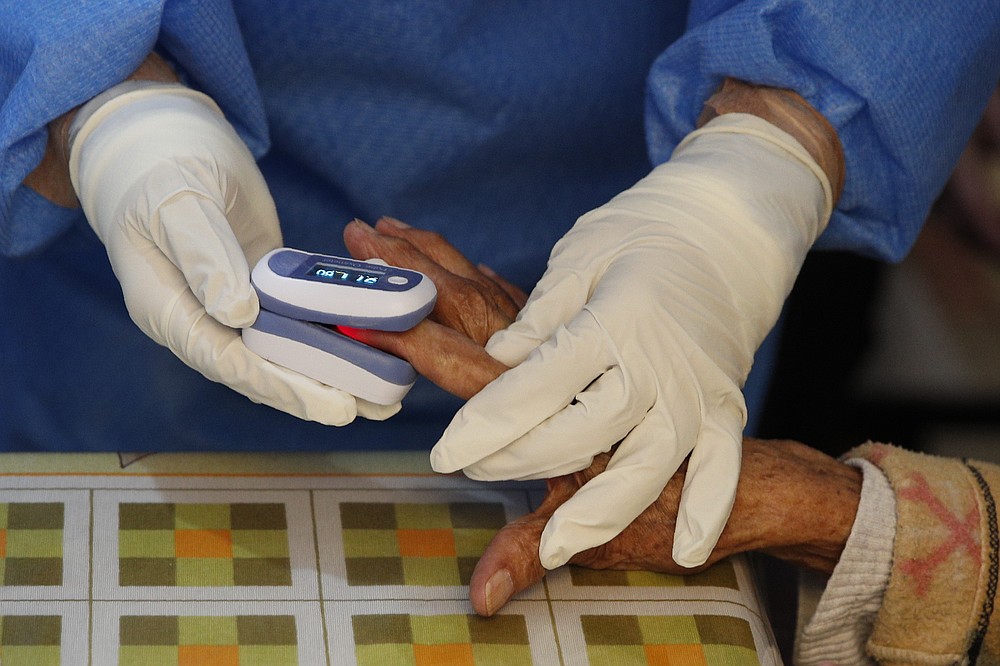 Carmen Rosas, 93, has her blood oxygen checked before being tested for COVID-19, in her home in the Venustiano Carranza borough of Mexico City, Thursday, Nov. 19, 2020. (AP Photo/Rebecca Blackwell) 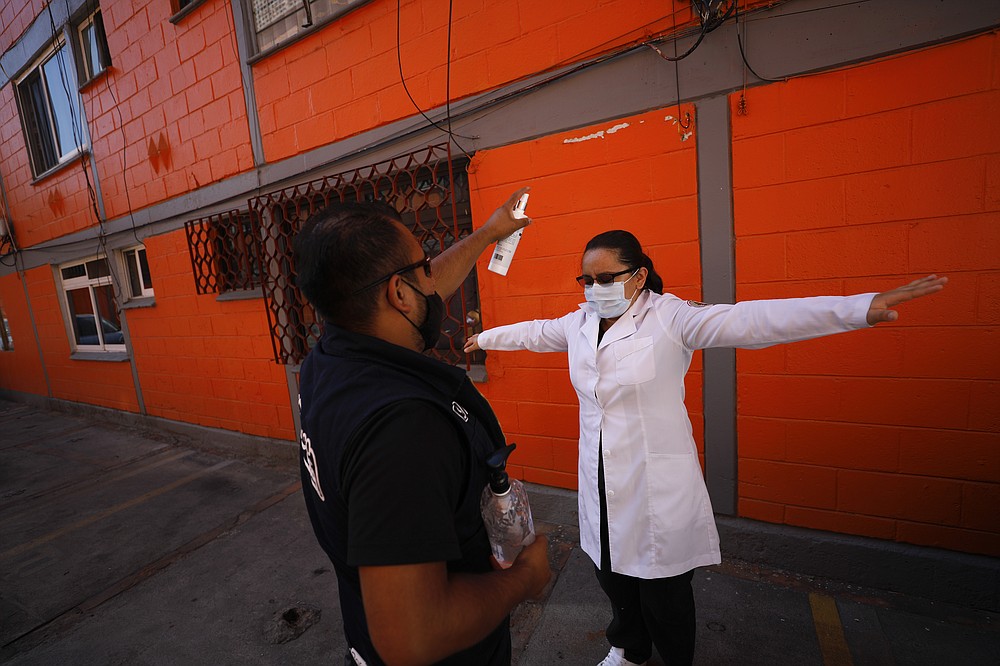 Dr. Monserrat Castaneda is sprayed with a disinfectant after conducting a COVID-19 test inside a home, in the Venustiano Carranza borough of Mexico City, Thursday, Nov. 19, 2020. (AP Photo/Rebecca Blackwell) 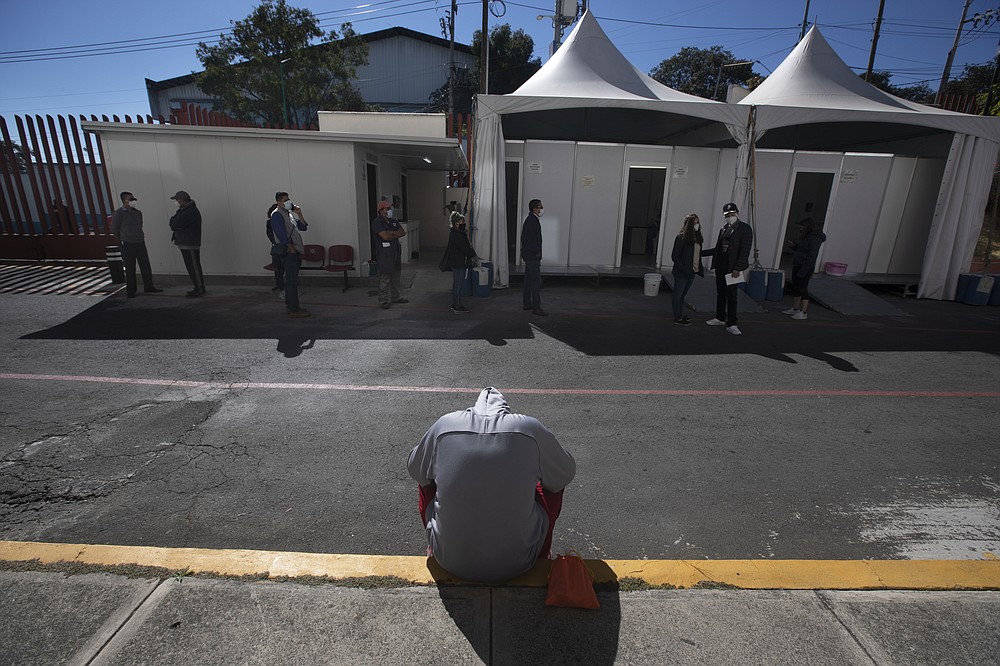 A young man waits to be tested for COVID-19 outside the Ajusco Medio General Hospital in Mexico City, Thursday, Nov. 19, 2020. (AP Photo/Marco Ugarte) 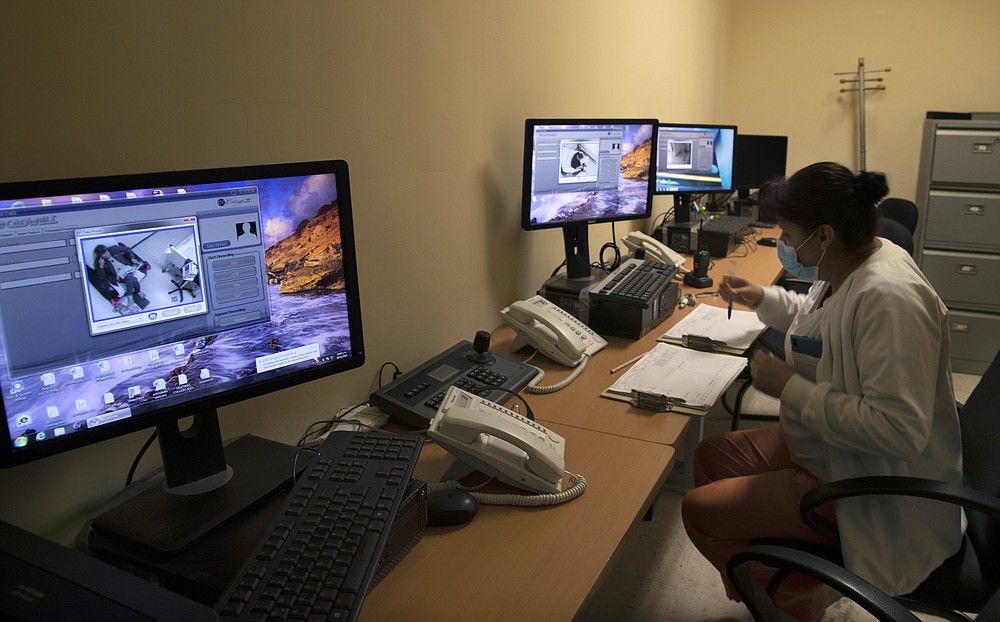 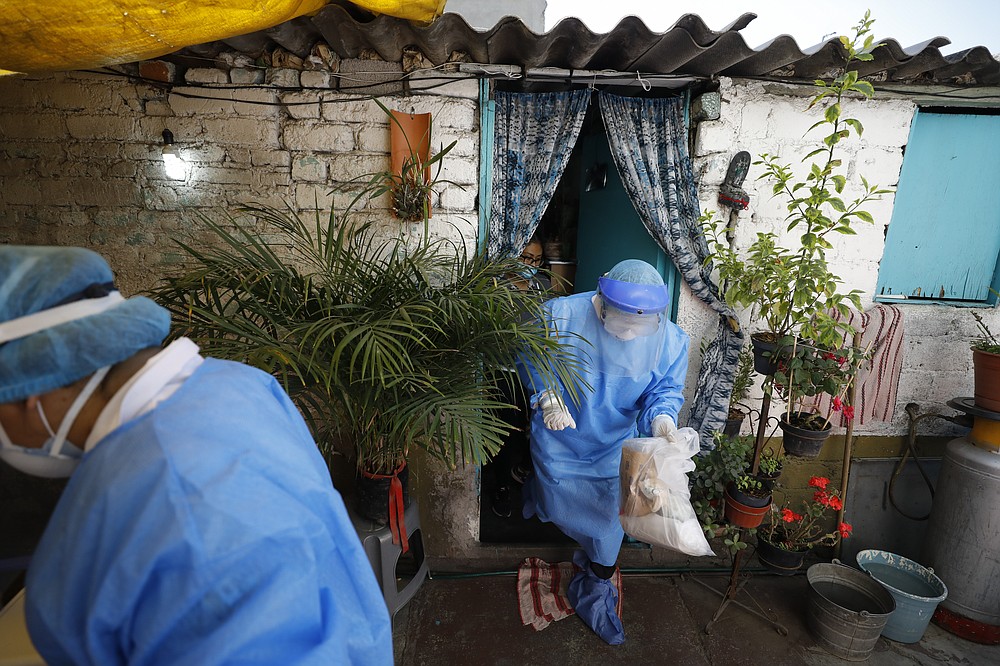