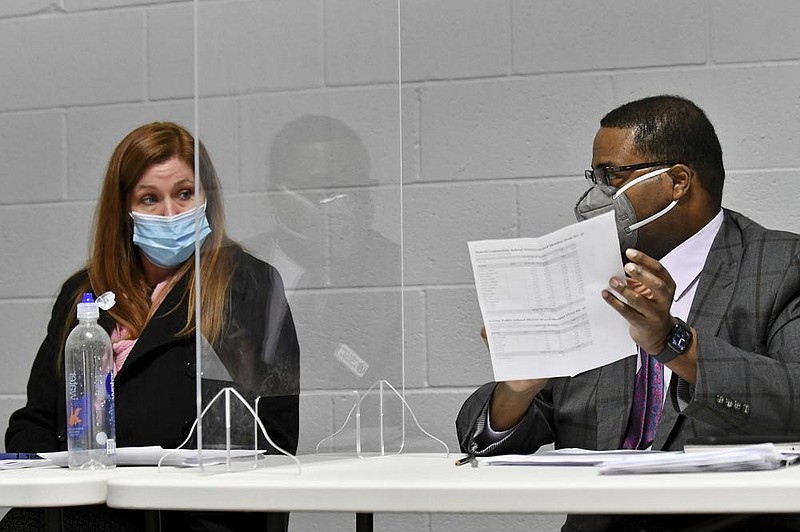 DETROIT -- President Donald Trump has invited the leaders of Michigan's Republican-controlled state Legislature to meet him in Washington today, according to people familiar with those plans, as the president and his allies continue a campaign to overturn the results of the election.

Also Thursday, a top Georgia election official said a hand tally of ballots cast in the presidential race was completed, and that the results affirm Democrat Joe Biden's narrow lead over Trump.

The hand tally of about 5 million votes stemmed from an audit required under a new state law and wasn't in response to any suspected problems with the state's results or an official recount request. The state has until today to certify results that have been certified and submitted by the counties.

Gabriel Sterling, who oversaw implementation of the state's new voting system, said Thursday evening that the audit was complete. Results were posted on the secretary of state's website.

[Video not showing up above? Click here to watch » https://www.youtube.com/watch?v=eFyX-aeM7c4]

In Michigan, meanwhile, Trump trails Biden by 157,000 votes. Earlier this week, the state's Republican Senate majority leader said an effort to have legislators throw out election results was "not going to happen."

In a news conference in Washington, Rudy Giuliani, the former New York mayor who is now serving as Trump's lead attorney, made claims that a national conspiracy had been orchestrated on behalf of Biden to rig the vote.

Earlier this week, Trump called a member of Wayne County's board of canvassers after a meeting in which she first refused, and then agreed, to certify election results from the state's largest county. She subsequently released an affidavit seeking to "rescind" her vote for certification -- something the secretary of state's office said was impossible.

Legal experts condemned the president's actions, saying he is trying to use the power of his office to alter the vote.

"To bring the weight of the White House and the presidency onto an individual county canvassing board commissioner about what to do with certification is an incredible assault on the democratic process," said Richard Pildes, a constitutional law professor at New York University. "No question about that."

Joanna Lydgate, the national director of the Voter Protection Program, said "there is no basis in fact or law for failing to certify the election."

"The president's unpatriotic behavior is reaching new heights with summoning state legislative officials to the White House," she said. "But the Legislature has no role in certification, as its leaders have already publicly admitted. This raises serious legal and ethical concerns about the president's conduct -- but it will not alter the outcome of the election."

At a Thursday news conference in Washington, Giuliani and other Trump campaign lawyers claimed that the campaign could roll back Biden's wins in multiple states, including Michigan.

"It changes the result of the election in Michigan if you take out Wayne County," he said. The county includes Detroit, the state's heavily Democratic, majority-Black largest city.

The allegations from ranged from complaints that Republican observers weren't allowed to observe vote-counting in Philadelphia and Detroit to a claim by Trump lawyer Sidney Powell that U.S. voting machines made by Dominion Voting Systems Inc. used software made in Venezuela at the direction of Hugo Chavez. Chavez, who served as the country's president, died in 2013.

Powell said her claim was substantiated by an affidavit filed with a lawsuit in Georgia. Dominion Voting Systems is an American company that has said it has no connection to Venezuela.

"President Trump won by a landslide," she said. "We are going to prove it."

"Yet another Rudy Giuliani spectacle exposes, as his appearances always do, the absurdity of Donald Trump's thoroughly discredited claims of voter fraud," Biden's campaign said in a statement.

Earlier Thursday, Trump tweeted that the news conference would show "a very clear and viable path to victory. Pieces are very nicely falling into place."

Asked at a Lansing news conference about the plan for legislative leaders to visit Trump, Democratic Gov. Gretchen Whitmer said, "I hope they wear masks, and I hope they stay safe."

"All the meetings in the world, though, can't take away from the fact that Joe Biden won Michigan by over 150,000 votes," Whitmer added. "That's 14 times the margin that Donald Trump won by in 2016. ... So we will be sending a slate of electors that reflects the will of the people of Michigan at the end of this process."

Earlier this week, Shirkey said Biden is the president-elect, and that an effort to award Michigan's electoral votes to Trump was "not going to happen," according to the news outlet Bridge Michigan.

In Michigan, the high-water mark for Trump's efforts came Tuesday night, during an hourslong meeting of the Wayne County board of canvassers. The board's two GOP members voted against certifying the county's results, which favored Biden by a large margin. But then, after three hours of comments from the public, the two GOP members changed their minds and voted to certify the results.

After the meeting, Trump called one of the two GOP members, Monica Palmer, who said Trump did not pressure her to change her vote.

"It was not pressure. It was genuine concern for my safety," Palmer said.

Afterward, Palmer and the board's other GOP member changed their minds again: On Wednesday, they signed affidavits saying they wanted to "rescind" their votes. The two said they were improperly pressured into certifying the election and accused Democrats of reneging on a promise to audit votes in Detroit.

William Hartmann, the other Republican on the board, has signed a similar affidavit, according to a person familiar with the document. Hartmann did not respond to a request for comment.

Jonathan Kinloch, a Democratic member of the board, lamented the late attempt by Republicans to change their votes.

"They're playing with the vote and the will of the people," Kinloch said.

The Michigan secretary of state's office, which oversees elections, said Thursday that there is no legal mechanism for Palmer and Hartmann to rescind their votes now. "Their job is done, and the next step in the process is for the board of state canvassers to meet and certify," said Tracy Wimmer, a spokeswoman for Secretary of State Jocelyn Benson, a Democrat.

Palmer and Hartmann said they had agreed to certify Wayne County's results on the condition that the results be audited by state authorities, to resolve small errors in the counts of voters at some Detroit precincts. The number of votes affected is believed to be in the hundreds, far less than Biden's margin of victory in Michigan.

On Thursday, the secretary of state's office said it would be conducting an audit of votes statewide and in Wayne County and other jurisdictions "where the data shows notable clerical errors" -- but only after the election results are certified.

Also Thursday, the Trump campaign dropped a lawsuit it had filed in federal court to block Michigan from certifying its election results. In explaining the move, Trump's lawyers said the Wayne County board had voted not to certify the county's results.

In Arizona, there were signs of a potential delay in vote certification in one pro-Trump county.

Supervisors in rural Mohave County, a Republican stronghold bisected by the Grand Canyon, were to canvass their county vote at a public meeting Monday. Instead, they decided to delay their vote and take it up again next Monday -- the deadline for certification.

The supervisors agreed that they did not question whether the results in their own county were accurate. Instead, one GOP supervisor said, they wanted to show solidarity with the president's challenges elsewhere.

"It has nothing to do with our results," Supervisor Hildy Angius said in explaining her vote. "It's more of a big-picture sort of thing."

Chairman Jean Bishop initially voted to certify the vote on Nov. 16 but changed her mind, siding with those who wanted a delay.

"To not canvass our vote makes no sense unless you're saying we're trying to make a statement to support the state party. Which makes it sort of political -- but I guess it is political," she said.

The move to delay the vote was introduced by Supervisor Ron Gould, a former state senator who said he fears that canvassing the vote would foreclose Republicans' options to challenge the statewide election results. "If we go ahead and canvass the election, then we're saying we're done, and that puts a different legal level on it," Gould said at Monday's meeting.

Trump trails Biden by more than 10,000 votes in Arizona. Secretary of State Katie Hobbs, a Democrat, has repeatedly defended the integrity of the election and said she will certify the statewide results.

The order, required by law after Trump paid $3 million for the recount, was agreed to after debate for more than five hours Wednesday night.

"It's just remarkable the six of us in a civilized fashion can't agree to this stuff," Democratic commissioner Mark Thomsen said hours into the debate. The commission is split 3-3 between Democrats and Republicans.

The recounts in Milwaukee and Dane counties, where Biden outpolled Trump by a more than 2-to-1 margin, will begin today and must be completed by Dec. 1. Milwaukee County officials said they plan to finish the recount by Wednesday. Dane County Clerk Scott McDonell said "it would be great to be done by Thanksgiving," but he didn't have an estimate for when the work would conclude.

Biden won statewide by 20,608 votes. Trump's campaign has cited "irregularities" in the counties, although no evidence of illegal activity has been presented.

"We understand the eyes of the world will be on these Wisconsin counties over the next few weeks," Meagan Wolfe, Wisconsin's top elections official, said Thursday. "We look forward to again demonstrating the strength, security, integrity and transparency of our election systems in Wisconsin."

Information for this article was contributed by Tom Hamburger, Kayla Ruble, David A. Fahrenthold, Josh Dawsey, Amy Gardner and Emma Brown of The Washington Post; by Josh Wingrove of Bloomberg News; and by Scott Bauer, Ed White, David Eggert, Zeke Miller, John Flesher and Kate Brumback of The Associated Press. 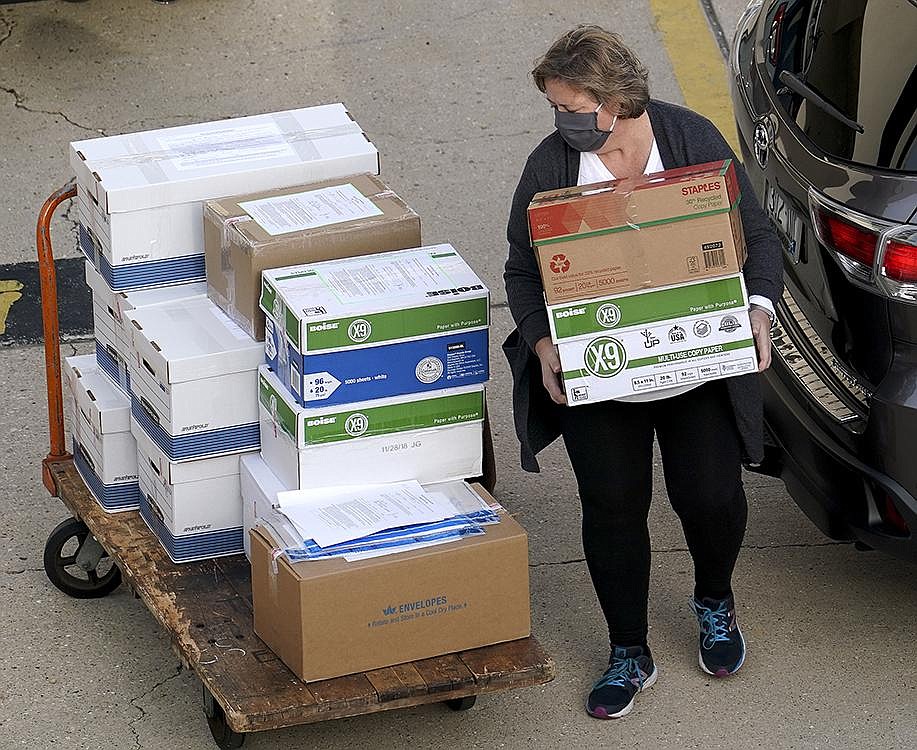