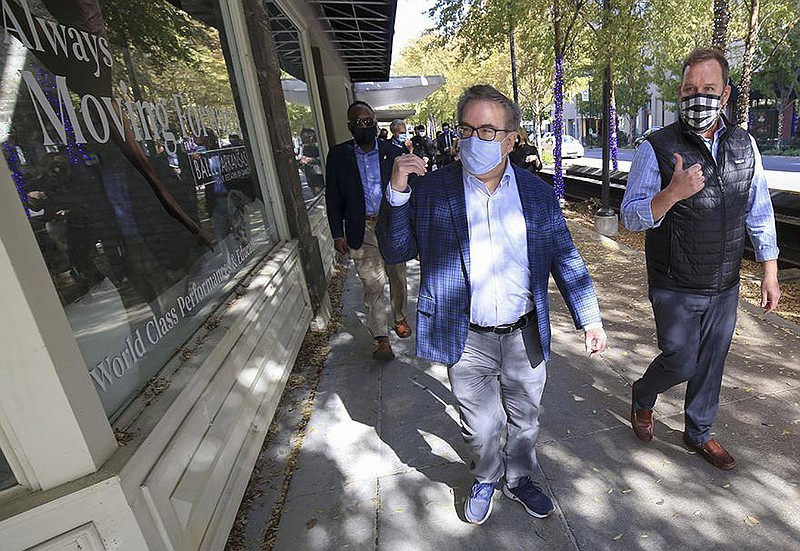 In the waning weeks of the Trump administration, Environmental Protection Agency Administrator Andrew Wheeler made his first trip to Arkansas, saying Little Rock could be a model for a federal program to clean up contaminated buildings.

Wheeler, who toured sites EPA grant money helped restore, said he will remain EPA administrator as long as Donald Trump remains president and declined to say who he believes won the presidential election.

While The Associated Press and other news outlets have called the election for President-elect Joe Biden, Trump has not conceded, instead choosing to file lawsuits in several key battleground states alleging voter fraud and irregularities.

As Biden prepares to take office in January, EPA staff has prepared documents to hand over to the new administration, but the General Services Administration needs to approve of any transition work before EPA staff can coordinate with the incoming administration, Wheeler said.

"We're ready to work with the team -- the Biden team -- if that is actually sanctioned by the GSA, but that is outside my control," Wheeler said

In his first trip to the state, Wheeler toured sites in Little Rock that have been restored thanks, in part, to $4 million in EPA Brownfields Assessment and Revolving Loan Fund grants, according to a news release from the agency.

After viewing restored sites around Little Rock, including the Clinton School of Public Service, Heifer International and buildings in downtown Little Rock, Wheeler said he was impressed with how local officials have used federal funds to restore contaminated buildings and to put them to new uses.

"It's a lot of diversity in the uses of these buildings here," Wheeler said. "The hotel I'm staying in was a brownfield site, the restaurant that I went to was a former brownfield site."

Through the brownfields program, the EPA has awarded $900,000 to localities in Arkansas over the past four years to help clean up and revitalize properties that are contaminated and require special restoration work. Through the program, localities award grant money to businesses and nonprofits, either through sub-grants or loans, according to Josh Fout, Pulaski County brownfields administrator.

"Brownfield funding helps bring abandoned and potentially contaminated properties back to beneficial use," said Arkansas Department of Energy and Environment Secretary Becky Keogh in a statement. "This is a win-win for Arkansas in that we can improve the environment while spurring both economic and community development in the process."

Before their cleanup, many of the downtown Little Rock sites Wheeler toured were either empty or being underused, often because they were contaminated with lead paint or asbestos, Fout said. After restoration work, those sites have become a key part of downtown Little Rock, including parts of the Main Street Creative Corridor.

"You are bringing in a whole new community," Fout said. "You are basically creating a community that had not even been there before where people can live, work, shop and play all in an area that for, you know, over 20 years had not had that happening."

Other sites Wheeler toured included Mulberry Flats, the Hall Building and a previously vacant property at the 500 block of Main Street, which has now been turned into a barbershop, law offices, a cross-fit gym, apartments, a jewelry store and Ballet Arkansas.

In May, the EPA announced it will give $300,000 in brownfields grant funds to Pulaski County to help assess potential contamination at sites in Little Rock, including at the former Veterans Affairs hospital on East Roosevelt Road and an old hotel near Interstate 30.