Cotton among big names in show of campaign skills by BILL BARROW THE ASSOCIATED PRESS | November 20, 2020 at 5:30 a.m. 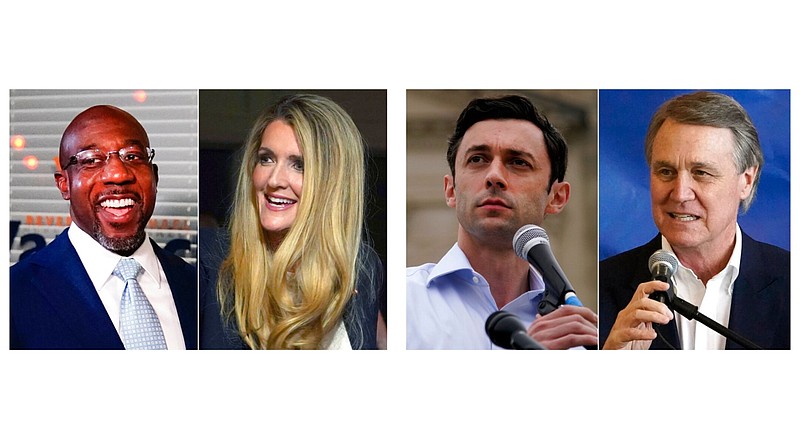 This series of file photos shows (from left) Raphael Warnock, U.S. Sen. Kelly Loeffler, Jon Ossoff, and U.S. Sen. David Perdue. Warnock and Ossoff, both Democrats, are in runoff elections for Senate seats against Loeffler and Perdue, both Republicans.

ATLANTA -- Even as votes are still being tallied in this month's election, Georgia's two high-profile Senate contests are drawing top GOP politicians to the state to campaign, network and raise their profiles.

[Video not showing up above? Click here to watch » https://www.youtube.com/watch?v=Dz029t0zjBM]

"Georgia gives anyone looking at their own run a chance at some action, where they can show some leadership and their campaign ability," said Matt Moore, a GOP operative who was leader of the South Carolina Republican Party in 2016.

Control of the U.S. Senate hangs on the results of the Jan. 5 runoffs. Republicans and Democrats are throwing piles of money and resources at the state. The pitched fight is playing out as Georgia's election officials conducted a hand tally of votes in the presidential race that has President-elect Joe Biden leading Trump by just 0.3 of a percentage point.

"He showed the Republican base is still his base," Moore said. "That's the story of 2020. It's not just about raising money and making the rounds in the party. These candidates want to show they can connect with voters" the way Trump has.

Rick Tyler, a Trump critic and once a top aide on Cruz's 2016 presidential campaign, said that's easier said than done, especially for any Republicans trying to establish any identity separate from the outgoing president. "Until there is a cure for Trumpism, the 2024 Republican presidential hopefuls will remain as frozen as a covid vaccine," Tyler said.

Scott, speaking to a packed restaurant in the northern edge of metro Atlanta, drew some of his loudest cheers when he mentioned talking "to the White House" before he arrived in Georgia and reported that "the president ... loves Georgia."

In suburban Atlanta, Rubio didn't mention Trump as he addressed hundreds of eager GOP voters, a few of them sporting buttons from Rubio's 2016 bid but far more of them wearing Trump's signature "Make America Great Again" hats. After reporters asked Rubio about Trump's claims of a stolen election, the senator noted that "a substantial percentage" of voters had questions about the vote count.

"I think everyone needs to relax," Rubio said. "We have an election process in this country." In December, he said, the Electoral College will choose a president and "that president will be sworn in on Jan. 20."

At the state fairgrounds Thursday, Cotton emphasized Senate control and reminded his audience of the recent boast by Senate Democratic leader Charles Schumer of New York: "Now we take Georgia, then we change the world."

As the crowd jeered at the mention of Schumer, Cotton said: "I don't know about you, but I don't think your state is up for the taking by Chuck Schumer, is it?"

None of the GOP visitors has declared a plan to run for president. When Rubio campaigned alongside Loeffler in Cobb County, among his strongest counties as a presidential candidate in 2016, he made no nod to his previous White House bid or the possibility of another one.

Scott, meanwhile, insisted he was in Georgia in his capacity as incoming chair of Senate Republicans' campaign arm, even though Indiana Sen. Todd Young remains the National Republican Senatorial Committee chair and will be making key spending decisions about the contests.

Brian Colas, a political adviser to Cotton, noted that the Arkansas senator campaigned in Georgia before November and was simply reprising his supporting role for two Senate colleague and friends. "The senator remains focused on 2020," he said. 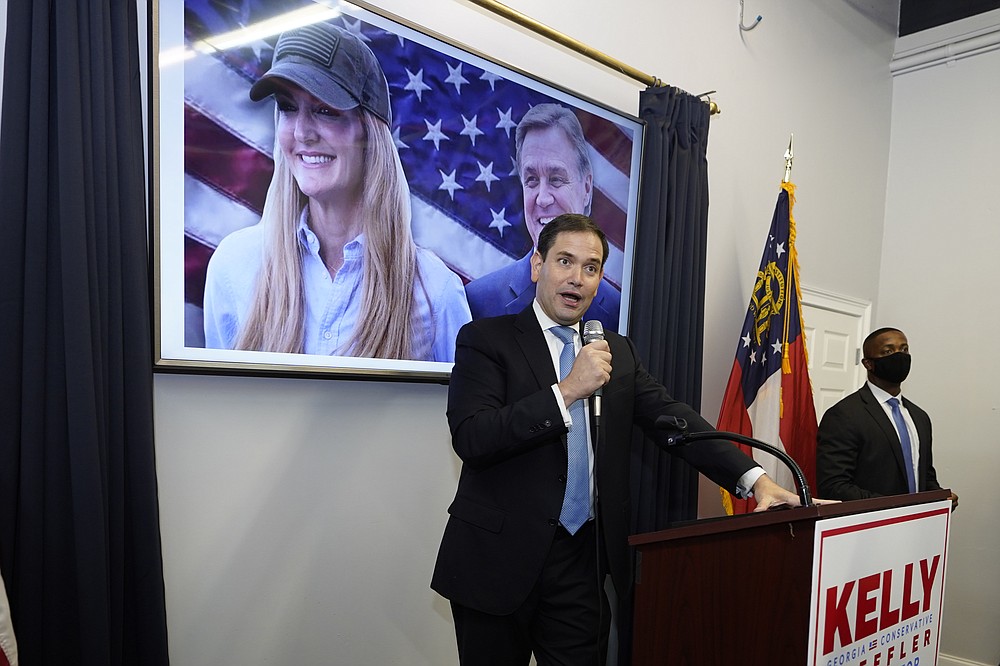