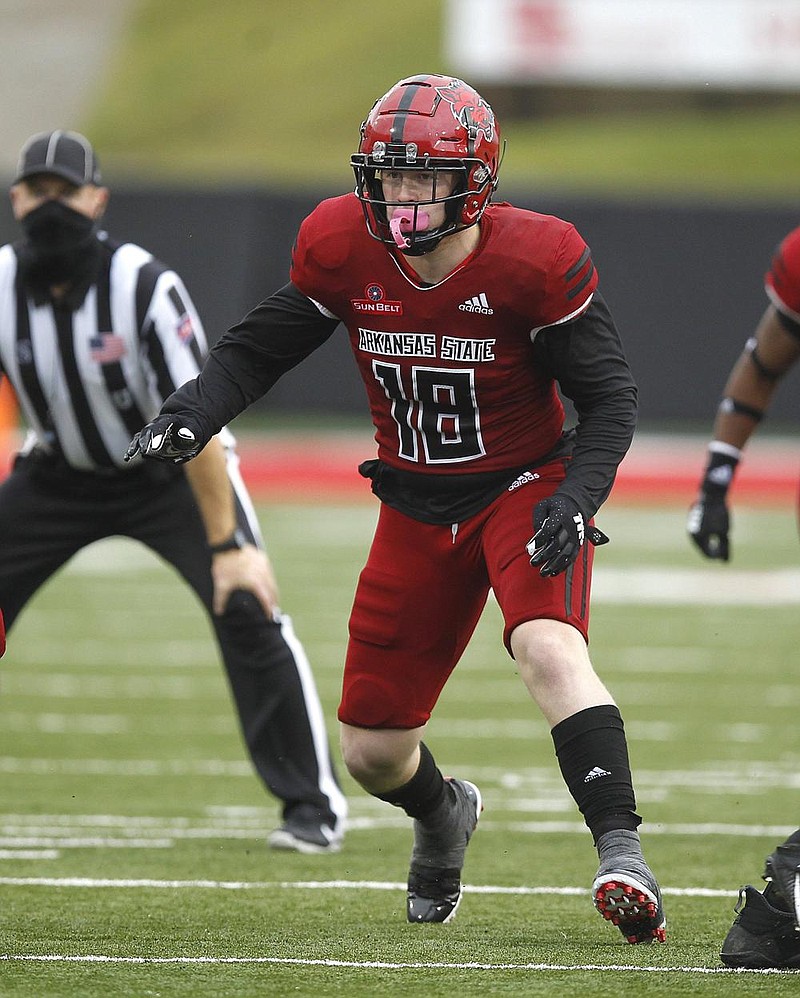 Arkansas State linebacker Justin Rice said although the Red Wolves are disappointed about being out of contention for a Sun Belt title, he and his teammates are staying positive as they work toward the goal of making a bowl game. (Arkansas Democrat-Gazette/Thomas Metthe)

The loss to Louisiana-Lafayette two weeks ago ended any hopes Arkansas State University had of winning their first Sun Belt Conference title since 2016. But there's still a lot for the Red Wolves to play for.

And don't think the ASU players aren't aware of it.

A couple of noteworthy accomplishments are at stake for ASU (3-5, 1-4) when it begins it's final four-game stretch Saturday at Texas State (1-9, 1-5). The Red Wolves have a chance to finish with a winning record for the 10th consecutive year -- the first time that's happened in school history -- and advance to a bowl game for the 10th year in a row.

"So much is still out there for us," ASU Coach Blake Anderson said. "We want to fight and keep that bowl streak alive and find a way to have a winning season. We know we had a really good team going before we kind of got dismantled a little bit with covid. But the guys are fighting to try to get back to where we were.

"That's challenging yourself, but a winning season and a bowl would be great for the brand, the program, the fan base, recruiting, all the things that will lead you right into the offseason and the next year."

ASU actually is already bowl eligible thanks to a recent decision by the NCAA, but that doesn't guarantee that the Red Wolves will be invited to one of the 37 bowls scheduled to be played this season, which includes the College Football Playoff games. ASU can improve its chances of extending its school-record bowl appearance streak with strong showings over the next four weeks.

Senior linebacker Justin Rice said his teammates understand how important these games are. It's because of that that he expects the Red Wolves' focus to be just as keen as it was when they were still in league-title contention.

"It was tough taking that in once we lost and [Louisiana-Lafayette] clinched the tiebreaker," Rice mentioned. "It's tough not accomplishing one of your goals, but another one of the goals we had also was to make a bowl game. That's still in front of us.

"The way we're looking at it right now is that we just need to get better each and every game, one practice at a time and one game at a time. That's what we're going to do from here on out, and good things will come."

Under normal circumstances, ASU would need victories in three of its final four games to reach the six-win threshold and a .500 record that is usually required to gain bowl eligibility. Special concessions are occasionally made as well if there aren't enough teams with six victories to fill bowl slots. In that instance, a team with a losing record could be picked to participate based on their academic progress rate.

However, 2020 has been anything but normal because of covid-19.

With the majority of teams playing abbreviated schedules, the NCAA recently waived those requirements and ruled that all FBS teams that are playing football this fall are eligible to play in a bowl game regardless of their record. But there is a caveat to that: There aren't enough bowls to go around.

That puts teams like ASU in a precarious situation because it's unknown where they'd be slotted if they were to get in a bowl. The Sun Belt signed a deal with ESPN earlier this year that gives the league five bowl tie-ins, but there's a chance for more to get in this year considering the circumstances.

The Red Wolves don't want to leave anything to chance, though. Winning can make decision-making for the higher-ups a lot easier.

ASU has lost its past three contests but received some good fortune when it added a 12th game to its schedule earlier this week. The Red Wolves agreed to host Incarnate Word on Dec. 12, which gives them an additional opportunity to play a home game and make an indirect impression on any bowl committee.

"I was happy that we got that added game," ASU sophomore quarterback Layne Hatcher said. "I love playing, I'd play year round if I could. We have a full season now, and it'll help us try to get to a bowl game.

"It'll give us another chance to get better, too. Our mentality doesn't necessarily change because our job is to still go out there, practice hard, get better and try to win games."

Rice noted that not having a game last weekend did help the Red Wolves "re-energize" themselves going into the closing portion of the season. But the California native also said it afforded ASU a chance to get an early jump on Texas State as well.

"We're ready to go," he explained. "[Texas State] a good team, better than what their record says. They lost a couple of games by just one score, and we know they're going to give us a fight no matter what.

"The season hasn't necessarily gone the way we wanted it to, but we know we have the talent to win these last four games. That's our mindset. As long as we continue to get better, we can make it to a bowl game and win that bowl game. ... that's a goal that's still out there for us to accomplish." 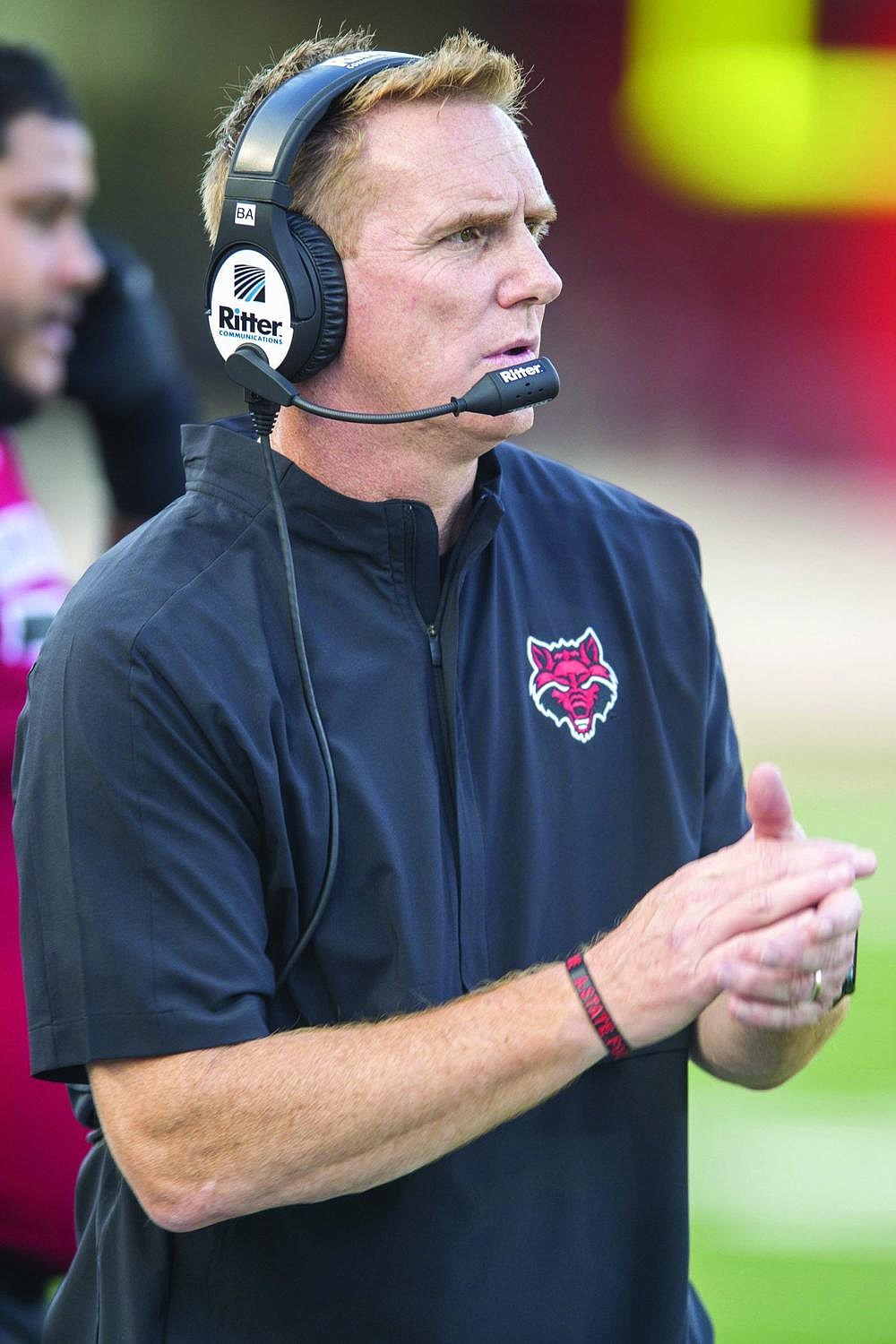 The loss to Louisiana-Lafayette two weeks ago ended any hope Arkansas State had of winning its first Sun Belt Conference title since 2016. But there’s still a lot for the Red Wolves to play for, as Coach Blake Anderson (shown) and his team are mindful. (Democrat-Gazette file photo)
ADVERTISEMENT