Virus blamed for 1st rise in five weeks by Compiled by Democrat-Gazette Staff From Wire Reports | November 20, 2020 at 8:27 a.m. 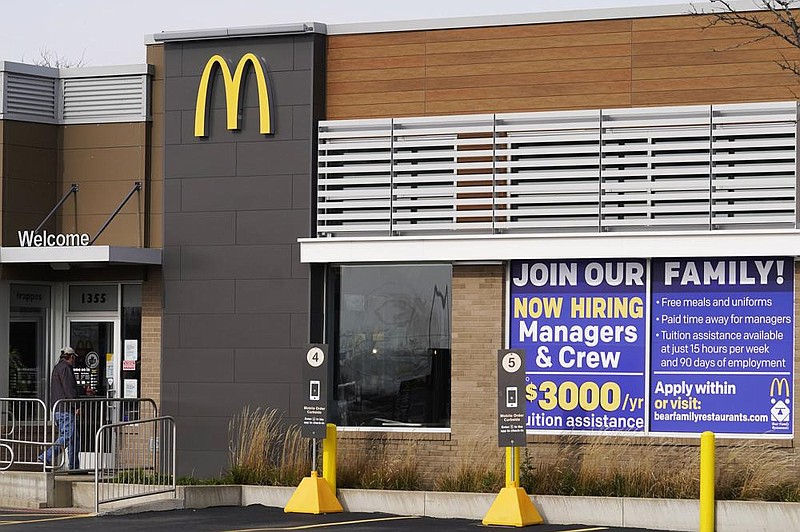 WASHINGTON -- New applications for unemployment aid in the U.S. rose last week to 742,000, the first increase in five weeks and a sign that the resurgent viral outbreak is likely slowing the economy and forcing more companies to cut jobs.

Continuing claims -- the total pool of Americans on ongoing state unemployment benefits -- fell 429,000 to 6.37 million in the week that ended Nov. 7. The number of Americans claiming extended assistance continued to rise as many unemployed exhausted regular state benefits.

The worsening pandemic and the arrival of cold weather could accelerate layoffs in the weeks ahead. Of the roughly 20 million Americans now receiving some form of unemployment benefits, about half will lose those benefits when two federal programs expire at the end of the year.

The Labor Department's report Thursday showed that applications for jobless aid rose from 711,000 in the previous week. In March, when the pandemic first intensified, the number had soared to 6.9 million. Before then, applications typically hovered around 225,000 a week.

The surge in confirmed viral infections, and worry about its effect on the economy, are putting pressure on financial markets.

The economy's modest recovery is increasingly at risk, with newly confirmed daily infections in the United States having exploded over the past two weeks to the highest levels on record. More states and cities are issuing mask mandates, limiting the size of gatherings, restricting restaurant dining, closing gyms or reducing the hours and capacity of bars, stores and other businesses. At least 15 states have tightened curbs on businesses to try to slow infections.

"The road to recovery is likely to be quite rocky, unfortunately," Nathan Sheets, PGIM Fixed Income's chief economist and a former Fed official, said on Bloomberg Television. "The virus and the restrictions being put in place to fight the virus are likely to take a bite out of economic activity over the next, say, three or four months."

Evidence is emerging that consumers are losing confidence in the economic outlook and pulling back on shopping, eating out and other activities. Spending on 30 million credit and debit cards tracked by JPMorgan Chase fell 7.4% earlier this month compared with a year ago. That marked a sharp drop from two weeks earlier. Consumer sentiment also declined in early November and is down nearly 21% from a year ago, according to a University of Michigan survey.

And retail sales rose 0.3% in October, the smallest gain since stores reopened in April after a nationwide shutdown in March. The weak gain suggests that consumers began pulling back on spending even before many new restrictions on businesses were imposed.

Separate data on Thursday was more upbeat: Sales of previously owned U.S. homes rose in October to a 15-year high, extending a housing market boom, while a gauge of factory employment in the Philadelphia region showed a fifth straight month of expansion.

But other recent reports suggest the labor-market rebound is losing steam. Census Bureau surveys conducted from mid-October to early November showed that the number of employed Americans declined by about 4.5 million, according to data released Wednesday.

Congress has so far failed to agree on any new stimulus package for jobless individuals and struggling businesses. The cutoff of extended federal aid at year's end will sharply reduce income for the unemployed, force a further reduction in their spending and perhaps weaken the economy.

One of those programs is Pandemic Unemployment Assistance, which made self-employed and contract workers eligible for unemployment aid for the first time. That aid was established by a multi-trillion-dollar stimulus package that Congress enacted in the spring.

The second measure in the stimulus package provided the additional 13 weeks of benefits for unemployed people who have used up their state benefits.

When those two programs expire on Dec. 26, 12 million people will lose their benefits, the Century Foundation estimates. About 2.9 million will probably transition to a state extended benefit program that can last from six to 20 weeks, the report said. The rest will lose benefits that average about $320 a week nationally.

The expiration of benefits will make it harder for the unemployed to make rent payments, afford food or keep up with utility bills. Most economists agree that because unemployed people tend to quickly spend their benefits, such aid is effective in boosting the economy.

In the recession of 2008-09, the government extended unemployment benefits to 99 weeks, and the additional aid lasted through 2013. When that program ended, about 1.3 million people lost benefits -- a fraction of the number who would lose their aid at the end of this year.

Treasury Secretary Steven Mnuchin said Thursday that he will not to extend several emergency loan programs set up with the Fed to support the economy in the midst of the pandemic.

The decision drew a rebuke from the Fed.

The central bank said it "would prefer that the full suite of emergency facilities established during the pandemic continue to serve their important role as a backstop for our still-strained and vulnerable economy."

But in a letter to Fed Chairman Jerome Powell, Mnuchin said the Fed's corporate credit, municipal lending and Main Street Lending programs would not be renewed when they expire on Dec. 31.

Mnuchin said that he is requesting that the Fed return to Treasury the unused funds appropriated by Congress for operation of the programs.

Information for this article was contributed by Christopher Rugaber and Martin Crutsinger of The Associated Press; and by Jarrell Dillard of Bloomberg News.