Dikeman making a difference for Paris 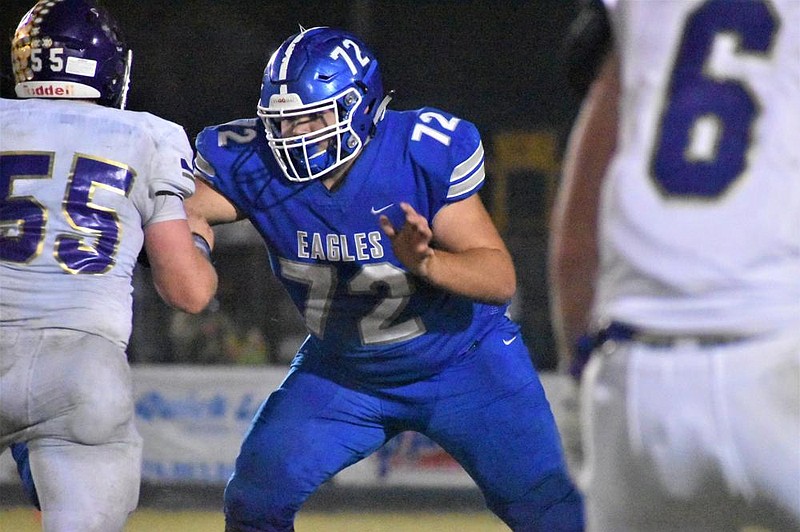 Jimmy Dikeman, 72, has been a major contributor for the Paris Eagles this season. Paris is having its best season since the 1950s, finishing as the No. 2 seed in the 3A-4 Conference. Courtesy photo Jim Best/Resident Press

Jimmy Dikeman hasn't scored a touchdown this season for Paris this season, but coach Tyler Clark is convinced he's a key reason why the Eagles are off to a 9-1 start.

The 6-foot-2, 305-pound senior hardly ever comes off the field for the Eagles, who defeated Danville 49-22 to finish the regular season with a flourish.

Dikeman said it's almost indescribable what he and his teammates have been able to do, after winning just three games in the last two seasons combined.

"It's really hard to put into words how it's changed," Dikeman said. "The first game this year was kinda hard since we weren't able to put everything together because of covid. But we were able to bring it all together like a puzzle.

"We've turned a lot of heads I believe."

The Eagles, who did not play last week after the Arkansas Activities Association revamped the Class 3A playoffs to hold play-in games, will host Salem (6-4), the fourth-place team from the 3A-2 Conference, to open the playoffs today. A potential second-round matchup against former conference foe Greenland looms if the Eagles advance.

Clark said it's easier to notice big No. 72 on defense because he spends most of the time in the opposing team's backfield. The nose guard usually requires a double-team and even then, he's able to cause problems, Clark said.

"He's always just creating havoc," Clark said. "He's moving the center back in the backfield and making it tough for them to do anything."

He had 51 tackles in the regular season, not an eye-popping number for sure. But 18 of those are tackles for loss. Dikeman has also gotten into the Eagles' turnover barrage, forcing and recovering two fumbles.

"Not overwhelming stats, but it's because he's getting double-teamed all the time," Clark said. "Him drawing a double allows linebackers to flow free and make tackles."

"He's just one of the better kids I've ever coached, understands how to get to that second level," Clark said."He knows how to use his body and leverage in picking up linebackers that are better athletes and clearing some paths for our running backs."

Dikeman said he watched his diet in the offseason and worked specifically to improve his footwork and agility. He's also dropped about 20 pounds. And that's all paid off in a big way for the Eagles

"Jimmy's probably one of our strongest kids, squats in the 400s and benching in the low 300s," Clark said. "He's stronger and more confident. And just does what he's coached to do. You'd be surprised how many kids maybe want to do their own thing, but Jim understands what we want him to do."

The Eagles defense has allowed just a shade over 11 points per game, but they also have created 28 turnovers and also scored an incredible eight defensive touchdowns this season.

Clark's not saying Dikeman is the only reason his defense has excelled, but he's played a big part.

"Jimmy does his job so well, we almost know as a staff he's drawing a double team," Clark said. "Now, we feel like we gain numbers in the box. People have a hard time pulling a guard or a tackle, too, when the center's 2 yards deep in in the backfield."

Clark and his staff talked about how linebackers might be a spot that was lacking last summer, but the position has become a bright spot.

"That's due to some players and some good coaching," Clark said. "But one of the reasons, too, is Jimmy's eating up double-teams," Clark said. "It just allows us to be more effective all over the field."

"It's a mental game," Dikeman said. "It's me versus those other two guys and I'm not gonna be moved."

The Eagles have put together an outstanding season, but Dikeman said they aren't close to being finished.

"We have a lot left to do," Dikeman said. "We feel like we can go a good way in the playoffs."