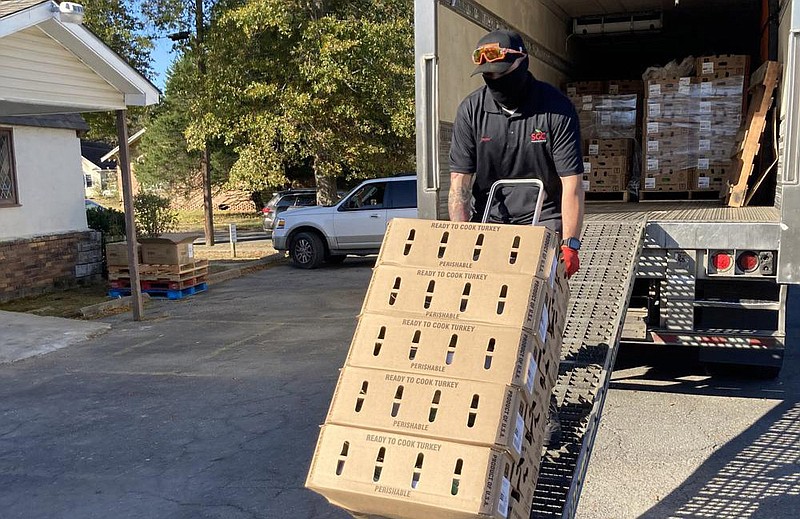 When it comes to helping nonprofits, Carlton Saffa is a tough customer.

On Thursday morning, he was standing in the parking lot of Neighbor to Neighbor, a Pine Bluff food pantry, as a tractor-trailer was being unloaded. The "donation" was from SGC Food Service of Springdale, Mo.

How did a company in Missouri end up giving 400 turkeys to Neighbor to Neighbor? That was Saffa's doings.

"I lean on everybody we do business with to help Pine Bluff," said Saffa, chief market officer with Saracen Casino Resort. "I get their best price on a product and then say, 'OK, what are you going to do for Pine Bluff?'"

As Taylor Seevers dollied the boxes of frozen turkeys down a ramp out of the truck and up a smaller ramp into the nonprofit's side entrance, Phil Brown, an SGC employee, said the food-service company does business with the Quapaw Nation, which owns and operates the new casino -- and which is how, through Saffa, SGC came to deliver the turkeys to the food pantry.

As Saffa's assistant, Henri Linton Jr., took photos of Saffa and Pat Tate, executive director of Neighbor to Neighbor in front of the tractor-trailer, Saffa said the effort was "not a vanity project" for him or the casino.

Rather, he said, it was fulfillment of a commitment to help Pine Bluff and the challenge to get other businesses in town to do the same. Tate, he said, had not called him to ask for assistance, but he said that shouldn't matter.

"You don't need to be asked to give," Saffa said. "This is the right thing to do. I would encourage other folks -- anyone who does business in Pine Bluff -- to do the same thing, to help in every way you can."

The companies that do business with the casino and that have come through with charitable outlays of one kind or another because of Saffa's requests, he said, have committed to giving material goods to nonprofits as well as services such as counseling and training.

After Seevers had delivered 200 turkeys, he drove the big truck over to the Convention Center, which had agreed to temporarily store the other 200 turkeys because Neighbor to Neighbor simply had nowhere else to put them, Tate said.

"We are thrilled to have the turkeys and want to extend our appreciation to Mr. Saffa, the casino, SGC foods and also to the convention center," Tate said. "These turkeys will be quickly going out to needy families that we serve in the community, families that might otherwise not have much to eat as they gather around a Thanksgiving table. We could not fulfill that need without help such as this, and we are most thankful."