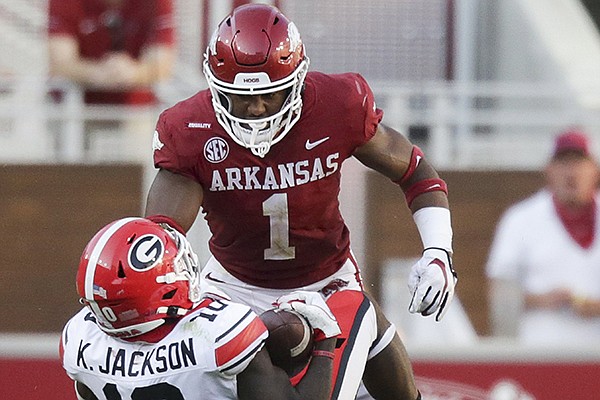 FAYETTEVILLE -- If your offensive formation, motions and route concepts have been on film before playing the University of Arkansas, Razorback safety Jalen Catalon has seen them and understands them.

Studious and exacting in his preparation, Catalon applies his learning on game days with instincts beyond his years as an ace ball hawk for the Razorbacks.

Combine Catalon's catalogued knowledge with his speed and ability to strike and you've got the ingredients for a playmaker of a high degree, even if his 5-10, 189-pound frame isn't prototypical for a safety.

Catalon has 40 solo tackles, the most among all FBS players who have been in seven games or less, entering Saturday's 11 a.m. battle for the Golden Boot between Arkansas (3-4) and LSU (2-3) at Reynolds Razorback Stadium.

The heady redshirt freshman ranks 27th nationally with 10 tackles per game, and seventh among players who have been in seven games or more. Catalon's tackle totals would be higher if he hadn't been ejected in the first quarter of a 42-31 loss at Texas A&M for a targeting call.

"To me, he's the key to our defense," Arkansas Coach Sam Pittman said this week. "We're so fortunate that he's young, that he's a freshman. But in mentality he's a senior. He's very, very smart on the field and in the classroom."

Catalon has the second-highest grade among SEC safeties by Pro Football Focus this season. His 75.6 grade ranks behind only Tennessee's Trevon Flowers (76.1) in the PFF ratings.

Catalon's hits are continuing to gain notice around the SEC. He sent Ole Miss receiver Elijah Moore out of the game with a tremendous shot in the first quarter, a development that led to a Rebels fumble on fourth down at the Arkansas 1-yard line a few minutes later when Moore's replacement bumped and dislodged the ball from quarterback Matt Corral after the snap.

The loose ball on that play? Collected by Catalon at the Arkansas 5. Catalon also added a critical 35-yard interception return for a touchdown in that game, one of his three picks on the season.

He dropped two Florida Gators last week on jarring hits, sending 6-4 receiver Trent Whittemore out with broken ribs and a punctured lung, and dazing 6-5 Justin Shorter while popping his helmet off with a huge hit.

Catalon might be a relative greenhorn in his football career, but he's drawing comparisons to Steve Atwater and Ken Hamlin, two of the greatest safeties in Arkansas history. Atwater is a 2020 NFL Hall of Fame inductee who earned the nickname "The Smiling Assassin" for his thunderous hitting.

"Honestly, when I first came in, I knew about Steve Atwater and I kind of heard about Ken Hamlin," Catalon said. "But as I started to hear those comparisons, I looked to see what they look like and stuff like that. After seeing how Steve Atwater played, he hits pretty hard. Same with Ken Hamlin.

"They were both ballers. It's just an honor to be put in that category to be compared to them because they both wore the Razorbacks with proudness and they put on for the Arkansas Razorbacks and Fayetteville."

Former Arkansas All-SEC receiver Jarius Wright, who holds the school record with 2,934 receiving yards (2008-11) and is second with 168 receptions, has watched Razorback games this season and has taken note of Catalon, who wears No. 1.

"You know, he's lights out," Wright said. "I don't want him to read this and get a big head, but he's playing at an NFL level as a redshirt freshman. For him to be so young, it surprises me the level he plays at.

"I've said that I wanted to show fans how much I loved the game through my play, and I feel like that's who he is. The energy he has, the way he flies around, the leadership on defense, all those things, I think they show."

Catalon makes plays because of his diligent film study and his quick diagnosis of concepts and route patters. He helps teammates in those crucial pre-snap moments by calling out signals.

"He's always talking," nickel back Greg Brooks Jr. said. "That's one thing about him, he's always talking no matter what. ... That's what I love about that dude. That dude is going to be great, for real."

ESPN analyst Dan Orlovsky previewed Catalon's performance for viewers last week, exclaiming, "He is like a missile, folks. Keep your eyes on him. He will shoot across your screen."

Catalon's presence was missed in the final three quarters against Texas A&M after his ejection for making contact with a receiver with the crown of his helmet. In the other games, his presence has been felt for an Arkansas defense that ranks 1st in interceptions, 10th in turnover margin and 47th in pass efficiency defense.

"He's just real valuable to us," Pittman said. "He's got that calm demeanor about him, kind of that silent assassin type about his personality. He will hit you, and I think there's different games this year where he sets the tone about what's going to go on out there."

Former Arkansas Coach Chad Morris said Catalon was one of the top high school players he had ever scouted after his signing with the 2019 class. However, Catalon had a shoulder issue and could not make an impact during limited playing time as a true freshman, despite having at least two pick-sixes in training camp.

Now, Catalon credits his vast film study, a routine he started at Mansfield (Texas) Legacy High, with helping him get off to a good start.

"I think I watch quite a bit," he said. "Enough to where I can watch it consistently and still get my school work done.

"It's one of the habits I built in high school. In high school I watched film a lot, just to kind of break it down, what offenses did. Me playing quarterback, it also helps me understand a quarterback's mind and what he's thinking on certain downs or what his philosophy is."

If Catalon continues to produce, comparisons will continue to grow to that of Atwater, a two-time Super Bowl champion and eight-time Pro Bowler with the Denver Broncos, and Hamlin, a Pro-Bowler with the Dallas Cowboys who was the first freshman to lead Arkansas in tackles.

"I have much respect for those guys and their games," Catalon said. "To just be compared to them is a blessing, but I just keep my head down and play my game and let y'all compare whatever y'all want to compare. I'm just going to do me, but it's an honor to even be put in that category for sure."

Noteworthy His brother Kendall is a junior receiver for the Razorbacks. … Has an SEC-leading 40 solo tackles and 70 total tackles to rank 5th in the SEC and 16th nationally. … His 3 interceptions are tied with Hudson Clark for the team lead and tied for 4th in the country. … Catalon has racked up 4 pass breakups, 2 forced fumbles and 1 fumble recovery to go along with a half-tackle for loss. … His 44 yards in interception return yardage is second on the team behind Greg Brooks Jr., and his 35-yard pick six against Ole Miss is one of three for the Razorbacks, joining Brooks’ 69-yarder at Mississippi State and Grant Morgan’s 23-yarder vs. Ole Miss. 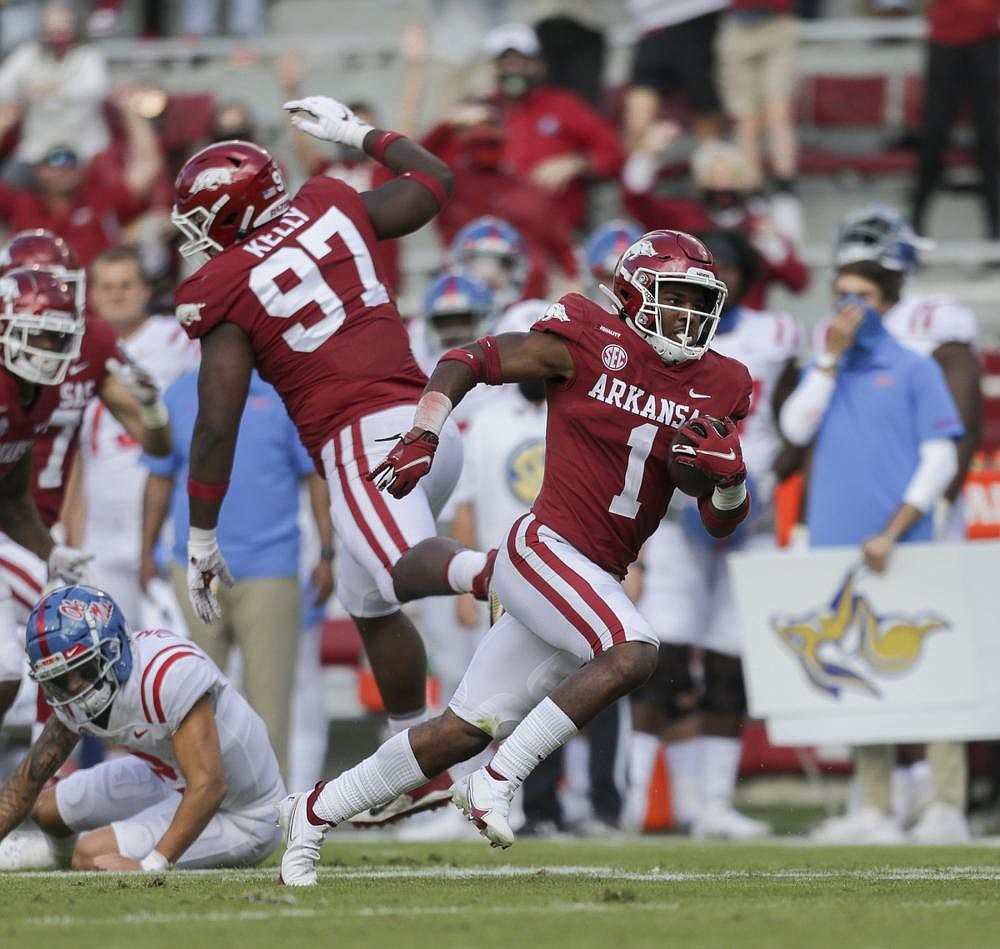 Redshirt freshman safety Jalen Catalon, who ranks 27th nationally with 10 tackles per game, is gaining a reputation around the SEC as he helps lead the Arkansas defense. “To me, he’s the key to our defense,” Arkansas Coach Sam Pittman said. (NWA Democrat-Gazette/Charlie Kaijo)
ADVERTISEMENT