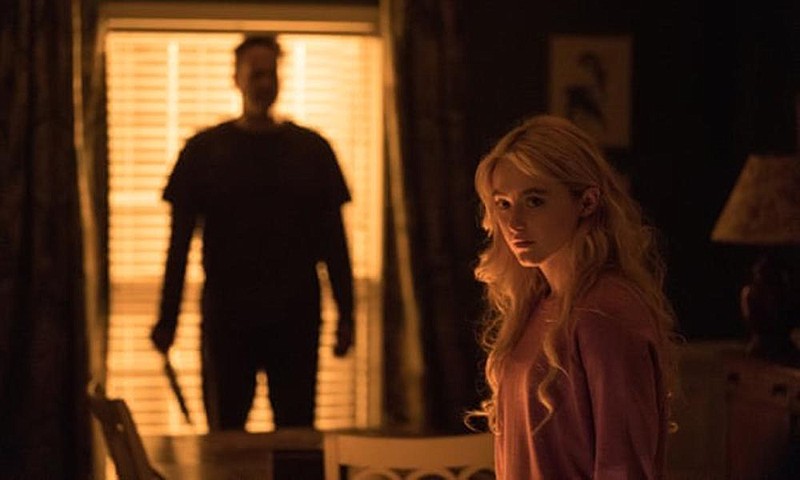 Vince Vaughn (left) and Kathryn Newton star in Universal Pictures’ “Freaky,” which came in at No. 1 at last week’s box office with $3.7 million in North America and $1.9 million in international receipts.

LOS ANGELES -- Although nearly half of U.S. and Canadian theaters are now open, the domestic box office continues to do middling business as the covid-19 pandemic rages.

Universal Pictures is betting a movie about a serial killer who hunts down teenagers is the antidote to real-life dread at the U.S. box office.

Universal and Blumhouse's "Freaky," starring Vince Vaughn as a serial killer who swaps bodies with an introverted teenager (Kathryn Newton), opened with $3.7 million in North America. With $1.9 million internationally, it earned a cumulative $5.6 million over the weekend, according to estimates from measurement firm Comscore.

It is one of the few movies that has hit cinemas since the start of the pandemic. It's also one of the first movies Universal is releasing as part of a new distribution strategy, in which it plays its new movies in the cinemas for about three weeks before selling them online.

The result comes in the midst of nationwide theater re-closures as the pandemic surges into what might be its most deadly stretch. Currently, 47.7% of theaters remain open, down from more than 50% in October.

This is the third week in a row that a Universal film has topped the weekend box office.

Universal's Focus Features had the previous weekend's No. 1 spot with "Let Him Go," which added $1.8 million in its second weekend (a 55% drop) for a cumulative $6.9 million. The studio's "Come Play" was No. 1 the week before and in its third weekend added $1.1 million for a cumulative $7.3 million.

Lost in the shuffle at No. 14 was last year's Cannes darling "The Climb," starring friends Kyle Marvin and Michael Angelo, who co-wrote the film with Michael Angelo Covino directing. Sony Pictures Classics was set to release the film in March when the pandemic shut down theaters. The comedy opened over the weekend to just $103,572.

Warner Bros.' "The Witches" added $1.8 million across 22 overseas markets for a global cumulative $13.2 million. The studio's "Tenet," now in its 12th week of release, added $1.7 million across 53 markets including North America for a worldwide total of $353.5 million. It was No. 1 for six weeks after its Sept. 4 release and is the only film in this pandemic period with an opening weekend box office above $20 million.

The box office will take all the help it can get. Practically every big blockbuster this year has been pushed back until 2021 or later, with studios refusing to release major new features before audiences can once again gather en masse. That's led to unusual arrangements between studios and theaters, which are normally sticklers about their right to show new movies exclusively for two or three months.

Running out of cash, racking up debt, and keen to promote any film to draw in more customers, exhibitors have become increasingly flexible throughout the pandemic. Universal now can put its films online 17 days after they debut in the largest U.S. theater chain, AMC Entertainment Holdings Inc. In exchange for shortening the so-called exclusive window, AMC gets a cut of Universal's online movie sales.

AT&T Inc.'s Warner Bros. is also said to be discussing a hybrid release strategy with theater chains in which it would move the film "Wonder Woman 1984" onto its HBO Max streaming platform shortly after it comes out in cinemas on Christmas.

AMC Chief Executive Officer Adam Aron has said that the new model with Universal helped keep his theaters open. In September, Universal released a crime comedy, "Kajillionaire," in theaters before quickly moving it online -- and cut AMC in on some of the sales. Aron said that netted the company more cash than a normal release would have.

AMC's largest competitor, Cineworld Group Plc's Regal Theatres, has closed all of its U.S. locations, saying a lack of new movies makes it too expensive to stay open. No. 3 chain Cinemark Holdings Inc. is mostly open and plans to show "Freaky," although it doesn't have a special arrangement with Universal that gives it a cut of sales. The company is relatively better-capitalized than its peers and says it has enough cash to outlast the pandemic, even without many new releases.