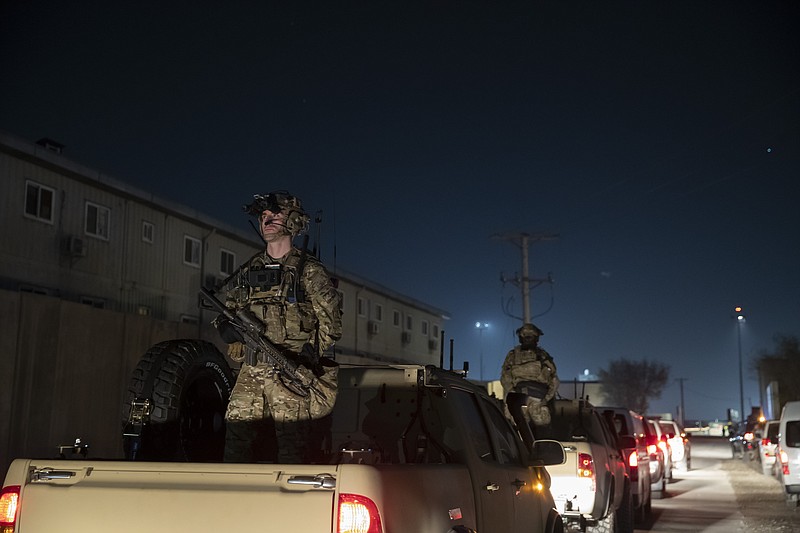 FILE - In this Nov. 28, 2019, file photo armed soldiers stand guard in the motorcade for President Donald Trump speaks during a surprise Thanksgiving Day visit to the troops at Bagram Air Field, Afghanistan. Although the Islamic State extremist group is battered and scattered, it cannot be fully defeated until the world finds a way to reconcile and resettle the thousands of people displaced by years of war in Iraq and Syria, the general overseeing American military operations in the Mideast said Thursday, Nov. 19, 2020. (AP Photo/Alex Brandon, File)

WASHINGTON -- Although the Islamic State extremist group is battered and scattered, it cannot be fully defeated until the world finds a way to reconcile and resettle the thousands of people displaced by years of war in Iraq and Syria, the general overseeing American military operations in the Middle East said Thursday.

Marine Gen. Frank McKenzie, commander of U.S. Central Command, said there is no military means of solving the problem of Mideast refugees and internally displaced persons, who await repatriation or resettlement and represent what he called an unfortunate byproduct of armed conflicts.

"Today, across vast swaths of Syria and Iraq, the systemic indoctrination of [internally displaced persons] and refugee camp populations who are hostage to the receipt of [Islamic State] ideology is an alarming development with potentially generational implications," McKenzie said in remarks to the National Council on U.S.-Arab Relations.

He said a solution must come from a joint effort by diplomatic, security and humanitarian organizations.

"Unless the international community finds a way to repatriate, reintegrate into home communities, and support locally grown reconciliation programming of these people ... we are buying ourselves a strategic problem 10 years down the road when these children grow up radicalized. If we don't address this now, we're never really going to defeat [the Islamic State]," he added.

Over the past six years, starting with former President Barack Obama's decision in 2014 to return U.S. troops to Iraq to halt an advance of Islamic State forces into Iraq from Syria, the U.S. has led an effort to militarily defeat the extremist group in both countries. But the group has not been extinguished, and McKenzie said it has not abandoned its aspiration to re-create a caliphate and attack the West.

President Donald Trump has pushed for a full U.S. withdrawal from Syria, saying the conflict there was not worth U.S. sacrifices, although there currently are at least several hundred U.S. troops there working with local forces to solidify gains against the Islamic State. The U.S. also has about 3,000 troops still in Iraq; on Tuesday the Pentagon announced that Trump had ordered a drawdown to 2,500 in Iraq with no change for Syria.

Rep. Liz Cheney, a Wyoming Republican, said Trump was in danger of repeating Obama's mistake of pulling out of Iraq in 2011 shortly after defeating al-Qaida there, a move she said led to the rise of the Islamic State.

"Decisions about troop levels should be made based on conditions on the ground, not political timetables in Washington," Cheney said. "Cutting troop levels in Afghanistan to 2,500 puts at risk our efforts to prevent terrorists from establishing safe havens from which they could again attack the United States."

Another Republican, Sen. Lisa Murkowski of Alaska, called it troubling that Trump acted during the transition to a new president. She urged a "pause" in major shifts in the U.S. military posture globally.

President-elect Joe Biden has long argued for bringing most U.S. troops home from the wars in the Middle East and Afghanistan while narrowly focusing the U.S. military on defeating the Islamic State and al-Qaida.

In the short run, McKenzie said, the Islamic State is in no position to pose a major security threat to the United States.

Pressure put on these groups by the U.S. military and other organizations has made it difficult for them to transfer the funds, organize the plans and move the people needed to conduct external attacks from Iraq or Syria, he said.

"Because when you are running for your life up and down the Euphrates River Valley, listening to the noise of an armed MQ-9 drone overhead, it's hard to think about conducting attack planning against Detroit," he said.