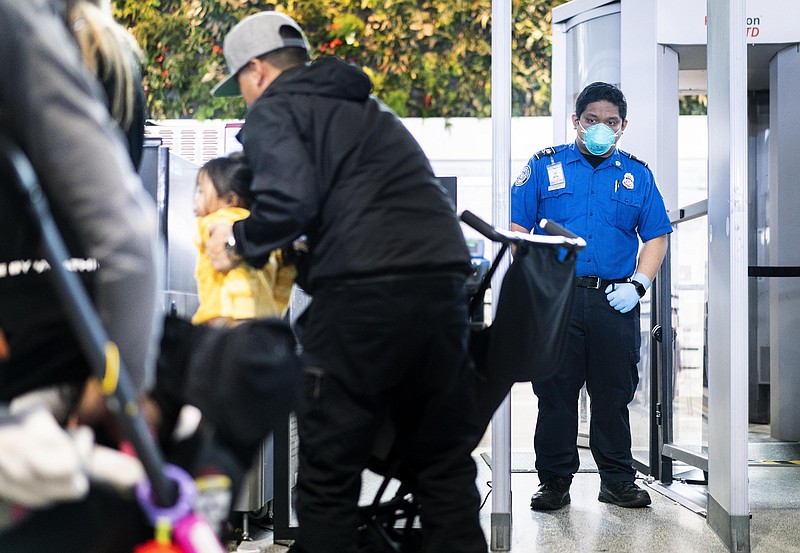 A Transportation Security Administration officer wears a protective face mask while working his shift at Terminal B at Oakland International Airport in Oakland, Calif., on March 4. MUST CREDIT: Washington Post photo by Melina Mara.

WASHINGTON -- The government has agreed to pay injury compensation benefits to nearly 3,500 federal employees on grounds that they contracted the novel coronavirus while at work, and has granted death benefits to survivors of 14 employees for that reason.

More than 2,600 other claims for benefits under the Federal Employees' Compensation Act, including 68 for deaths, are pending, according to the Labor Department.

The claims reflect a continuing rise in infections among federal workers amid the general increase nationwide, in which the death toll has now crossed 254,000, even as large numbers of federal employees continue to work remotely.

More than 6,600 federal workers have sought compensation for catching the coronavirus on the job; in addition to those already granted or pending, 339 have been denied and 191 were withdrawn. That compares to about 4,000 claims, including 60 death claims, as of late July.

The updated figures were provided in response to a request from The Washington Post.

"This data confirms our oft expressed concerns that the Trump administration was rushing to reopen federal agencies without a plan," Rep. Gerald Connolly, D-Va., chair of the House Government Operations subcommittee, said in an emailed statement. "At least 3,500 federal employees were needlessly exposed to coronavirus for Trump's purely political purposes."

He said science and data should drive decision-making. "That is why I've repeatedly called on federal agencies to adopt maximum telework practices. We cannot have a federal workforce debilitated by the coronavirus," said Connolly, who has asked for audits of workplace health and safety policies at the two dozen largest federal agencies.

When asked to comment, the White House did not provide a response.

The Federal Employees' Compensation Act program covers about 2.7 million federal employees, including more than 600,000 in the U.S. Postal Service. Last year the compensation program paid about $3 billion in benefits to more than 200,000 people.

For disabling injuries or illnesses deemed to be work-related, benefits include payment of medical costs related to the condition, full pay for the first 45 days an employee is unable to work, and then compensation of up to three-fourths of pay for as long as the disability lasts.

For work-related deaths, a benefit of half of the employee's salary is paid for the life of a surviving spouse, unless that person remarries before age 55, plus up to another 25% for children until they reach age 18 or 23, depending on whether they are enrolled in college.

As the pandemic first emerged early in the year, many federal agencies switched to what government calls "maximum telework" status, in some cases with nearly all of their employees working remotely. A smaller number of employees whose work sites were closed but who could not telework were put on paid leave.

However, employees in front-line occupations such as law enforcement and medical care generally remained at their regular work sites. For such positions, the compensation program set a policy that a case of covid-19, the disease the virus causes, will be presumed to be work-related; those in other positions must prove that link.

In recent months, many agencies have called back some employees from leave or telework, although the number still working remotely remains high by the government's traditional practices. There is no formal accounting of how many employees are in each working status.

"Thankfully, many of the employees we represent continue to work from home. For many agencies where we represent employees, the teleworking programs that we've helped to establish in their agencies have really been vital these last nine months," National Treasury Employees Union President Tony Reardon said in a conference call with reporters this week.

"I think it's safe to say that most of the agencies seem to have paused their reopening plans for now. They are certainly planning for the next phase, but I think it is still too soon to start forcing employees back into their offices," he said.

The government does not centrally account for coronavirus infections and deaths among federal employees, although several of the largest agencies publicly post that data. The Defense Department most recently reported 16,582 total infections among its 750,000 civilian employees since the pandemic began, with 70 deaths -- about triple the number of infections and double the number of deaths from late July.

The Postal Service said it has had 17,575 cases but does not count deaths.