Amid drawdown, U.S. fends off Taliban 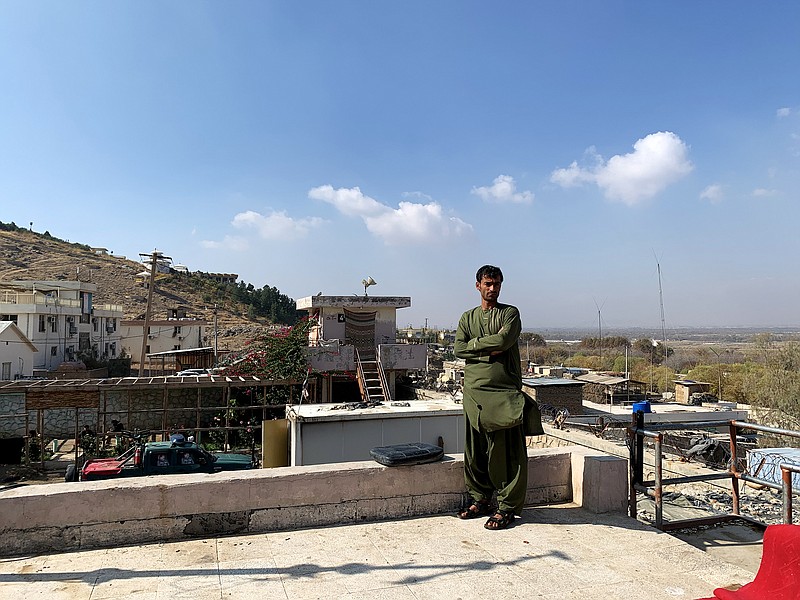 Javid Ahmed, a member of Afghanistan's national police, stands atop an outpost on the edge of Kandahar city overlooking Arghandab district. The district had been in government control for over a decade before it was overrun by the Taliban earlier this month as the militants launched a series of offensives across southern Afghanistan. MUST CREDIT: Washington Post photo by Susannah George

KANDAHAR, Afghanistan -- The Taliban's attacks outside the large provincial capital began this month with little out of the ordinary: sporadic small-arms fire on military outposts. Quickly, though, the gunfire morphed into a barrage of heavy artillery that allowed thousands of Taliban fighters to pour into the district of Arghandab.

Within a matter of days, the district, which had been under government control for a decade, was in Taliban hands.

It was only after a series of punishing U.S. airstrikes that Afghan ground forces were able to retake the territory, Afghan officials said. U.S. air support played a similarly critical role in October in pushing back the militant group in Helmand province, where the Taliban came within yards of breaching the provincial capital's limits.

The battles come as U.S. forces have begun to close Kandahar Air Field, according to two Afghan officials, as part of an accelerated drawdown of U.S. forces in the country. After the recent weeks of intense fighting, many there fear the reduced troop numbers and base closures could mean less U.S. support for battles against an emboldened Taliban.

The U.S. airstrikes were "the only reason the Taliban was pushed back," said Lt. Col. Niaz Mahmad Majahad, the national police commander in Arghandab whose forces fought the Taliban until the military arrived. "If it weren't for the airstrikes, the Taliban would not have fallen."

Over the next two months, the number of U.S. forces in Afghanistan will be cut in half, from around 5,000 to 2,500, acting Defense Secretary Christopher Miller announced from the Pentagon on Tuesday. That level will mark the lowest number of U.S. troops on the ground in the conflict since 2002.

It was a move Miller's predecessor warned against in a classified memo days before he was fired. Former Defense Secretary Mark Esper cited ongoing violence in Afghanistan and apprehension about undercutting negotiations between the Afghan government and the Taliban among his concerns about a more rapid withdrawal.

A U.S. defense official, speaking on condition of anonymity because of the sensitivity of the issue, said a small number of U.S. service members are at Kandahar Air Field as the drawdown continues. Many of them are preparing equipment to be sent out of the country as the Jan. 15 drawdown deadline looms, he said.

The U.S. military command in Afghanistan, known as Resolute Support, did not comment on airstrikes against the Taliban in Helmand and Kandahar or on the status of Kandahar Air Field.

The airfield, which Afghan officials say provided support for the airstrikes last week, was once the largest NATO base in Afghanistan, home to what U.S. troops called the "boardwalk," a collection of stores, restaurants and U.S. fast-food chains such as KFC and TGI Fridays.

Gul Ahmad Kamin, 34, a member of parliament from Kandahar, said U.S. forces have been slowly closing the airfield for months and were just one week away from shuttering the base when Taliban fighters attacked nearby Lashkar Gah, Helmand's provincial capital. A senior Afghan official who spoke on condition of anonymity to discuss the matter confirmed that U.S. forces have closed parts of the base.

An Afghan employee of a private security company located near U.S. compounds on the base said he noticed movement to close the base about a month and a half ago, when several large shipping containers were handed over to the Afghan military, surveillance balloons were reeled in and deflated, and U.S. troops began selling off their civilian vehicles to private contractors. He spoke on condition of anonymity because his employer did not authorize him to speak to the media.

Throughout the weeks-long Taliban offensive in southern Afghanistan, the cargo planes continued their runs to and from Kandahar Air Field, he said.

For Afghan government forces stationed in and around Kandahar, the presence of U.S. troops is as much about symbolism as about the technical support they can provide, Kamin said.

In many parts of Afghanistan, as U.S. troops have drawn down, insecurity and higher levels of violence have followed. And although the public text of the U.S.-Taliban deal does not call for a reduction in violence, U.S. officials have said Taliban attacks on cities and towns under Afghan government control are "not consistent" with the agreement.

Abdul Nafi Pashtun, commander of Afghanistan's 04 paramilitary unit, said the Taliban's assault on Arghandab is another breach of the deal.

"Their plan was to enter Kandahar city," he said. Established primarily to conduct night raids and other small, targeted operations, Pashtun's unit has been marshaled to fight on the front lines over the past seven months as Taliban attacks have intensified and regular Afghan units with less U.S. support have proved unable to protect territory under government control.

Majahad, the national police commander in Arghandab, said an estimated 3,500 Taliban fighters launched the first assault on his district and "had 500 motorbikes with them," he said, shaking his head.

In three decades of military service, he said, he never saw a Taliban assault of such magnitude. "There is no doubt they are stronger and more well equipped now," he said. "And with this news [of faster U.S. troop withdrawals], the Taliban gets a great advantage."

Information for this article was contributed by Aziz Tassal and Dan Lamothe of The Washington Post. 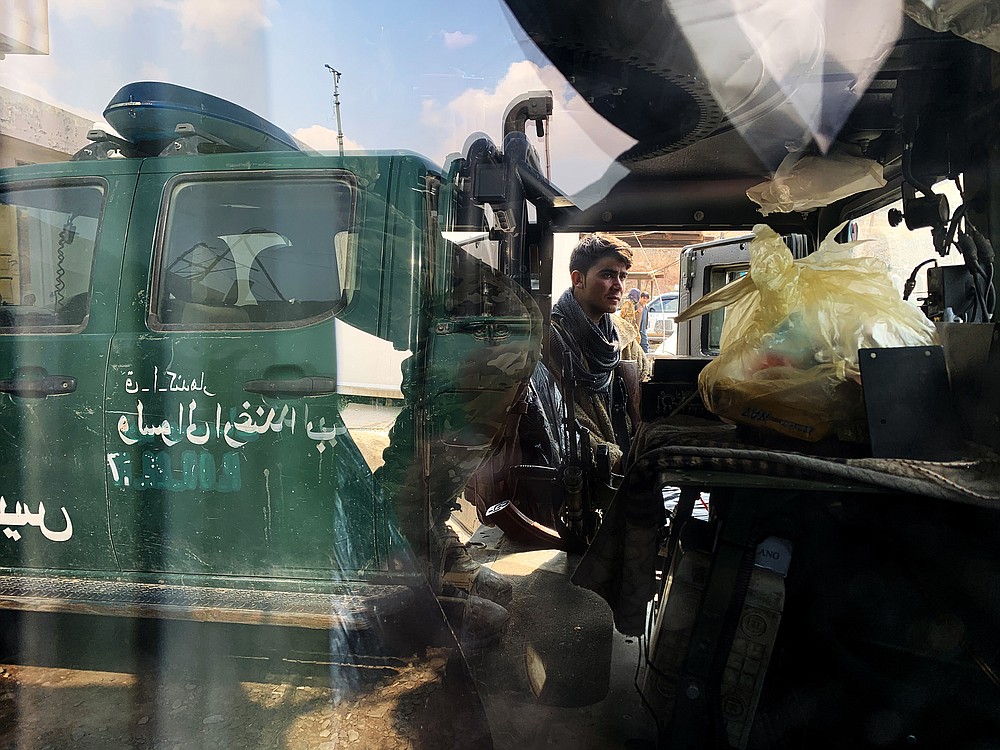 A member of a bomb disposal unit prepares to move out to territory around Kandahar city recently retaken from Taliban control. MUST CREDIT: Washington Post photo by Susannah George 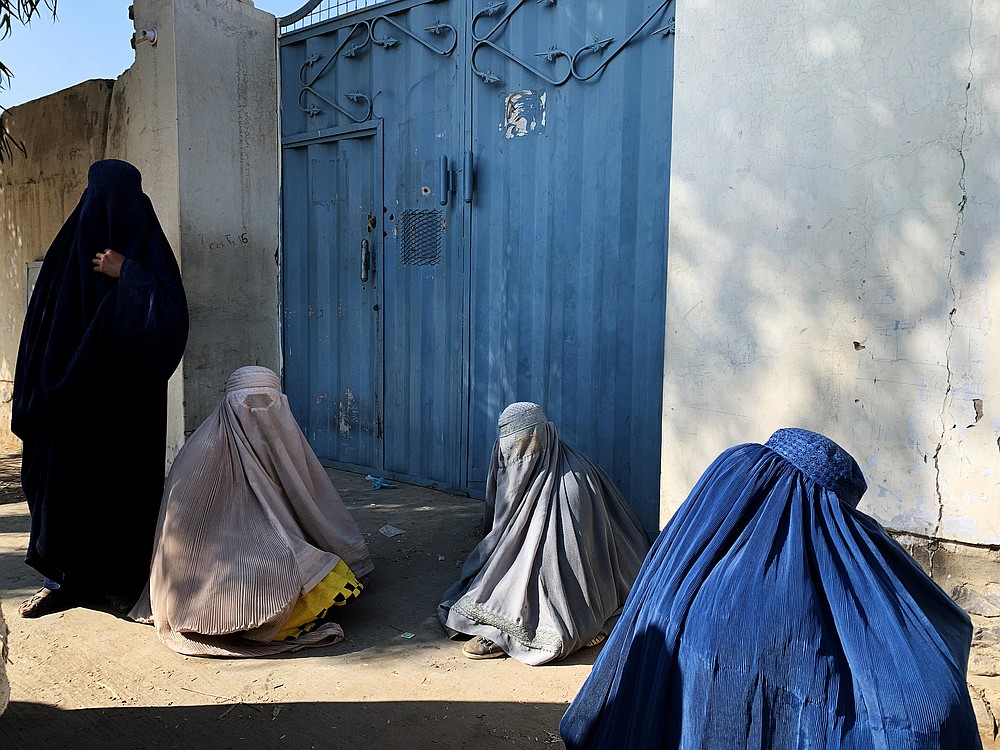 Women who fled clashes between the Taliban and government forces wait outside a government office in central Kandahar city hoping to collect aid for civilians displaced by the conflict. Afghan government figures say between 6,000 and 7,000 civilians have been displaced by fighting in Kandahar. MUST CREDIT: Washington Post photo by Susannah George
ADVERTISEMENT