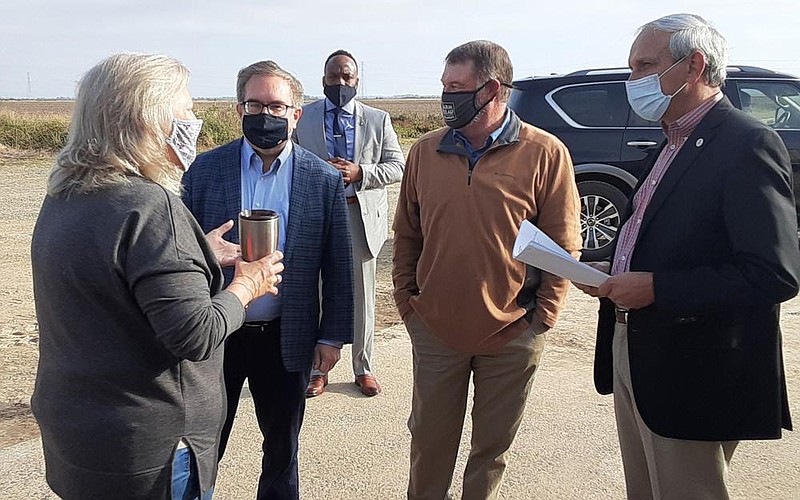 The $3.2 million grant from the EPA will go to the state Department of Agriculture to lower pollution from runoff in waterways. The grant is aimed at what Wheeler called "non-point source water pollution" runoff that often comes from farms. The grant will go toward preventing excess pollution from leaching into rivers and streams in the state, Wheeler said.

"It's far better to prevent the pollution from occurring than to go in after the fact and to try and clean it up," Wheeler said. "That's what an environmental regulator is supposed to do all the time -- work with the regulated community to keep the pollution from happening in the first place."

Wheeler was making his second public appearance in Arkansas this week, meeting with farmers Terry and Lori Dabbs and state officials including Attorney General Leslie Rutledge, Department of Energy and Environment Secretary Becky Keough and Secretary of Agriculture Wes Ward.

Before announcing the grant, Wheeler criticized the Obama administration for what he called unnecessary regulations, touting how the outgoing Trump administration has repealed environmental rules such as the Waters of the United States rule that he said hurt farmers.

When asked about whether President-elect Joe Biden's administration would restore those regulations, Wheeler said he was confident the regulations the Trump EPA have repealed won't return.

"All of the regulations that we have put forward over the last four years are grounded in the law itself," Wheeler said.

In east Arkansas, preserving water quality and quantity has become a key topic for farmers as many aquifers in the area have been depleted. Much of east and south Arkansas, including Arkansas County where Friday's event was held, has been deemed "critical groundwater areas" by the state Department of Agriculture.

Terry Dabbs, who along with his wife Lori, owns two 1,500-acre farms in Arkansas County, said water is the "lifeblood" of his farm, and he has had to increase efforts to conserve it.

"Everything, every acre we grow, no matter what the crop is, has to be irrigated, so water is really a big deal to us," Dabbs said.

While some farmers depend on groundwater to irrigate their crops, Dabbs said his farms draw water from two reservoirs on his property. While the farm has long had a large reservoir on it, more recently Dabbs has started using only surface water to irrigate after wells began to dry up.

The Agriculture Department will use the grant money to update unpaved roads to prevent runoff, to expand its program to collect unused pesticides from farmers and to direct more funds to the University of Arkansas' Discovery Farms Program, which provides water quality analysis on a dozen farms, according to Ward.

Non-point source water pollution generated from rainfall or snowmelt often carries pollutants from the soil into waterways. In east Arkansas, nitrogen from fertilizers can run off into waterways, notably the Mississippi River.

After the announcement, Wheeler toured the Dabbs farm, where Dabbs explained how his family uses data from the UA Discovery Farm Program, which studies his farm's water use and soil, to more efficiently fertilize his rice and soybean fields.

"So instead of just going out there and blanking fertilizer, you're pinpointing it where the soil samples show you actually need it," said Terry and Lori Dabbs' son, Trent Dabbs. "So that reduced some of the total amounts that we've put on."