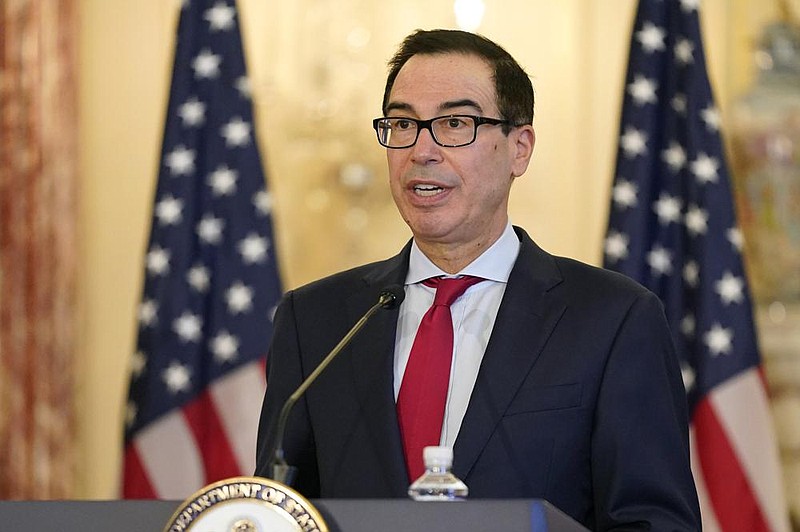 Treasury Secretary Steve Mnuchin announced Friday that it was ending several lending programs for businesses and returning the funds to the Treasury. “Let’s go use this money in parts of the economy that need it,” he said. (AP/Patrick Semansky)

Biden's team has not been in communication with the Treasury Department and had no advance notice or consultation that Treasury Secretary Steven Mnuchin would pull the plug on several emergency lending programs run jointly by the Treasury and Federal Reserve, according to Biden policy advisers.

Aides to the president-elect have looked at the unspent aid as one of many potential tools to boost the flagging economy Biden is set to inherit on Jan. 20, the advisers said. Some of the lending facilities, such as the troubled Main Street lending program, have issued few loans and could be revamped to offer more generous assistance to small businesses. In a letter released Thursday, Mnuchin requested that unspent money be reallocated, a decision that would require cooperation from the Fed.

"The Treasury Department's attempt to prematurely end support that could be used for small businesses across the country when they are facing the prospect of new shutdowns is deeply irresponsible," said Kate Bedingfield, a Biden spokeswoman, in a statement. "At this fragile moment, as the covid and economic crises are re-accelerating, we should be reinforcing the government's ability to respond and support the economy."

Bedingfield's comments come amid growing complaints that the Trump administration is impeding the incoming Biden administration's transition to power early next year.

On Thursday, the Fed responded to Mnuchin's decision with an extraordinary rebuke, saying the central bank "would prefer that the full suite of emergency facilities established during the coronavirus pandemic continue to serve their important role as a backstop." The rare public statement revealed a rift between Mnuchin and Federal Reserve Chairman Jerome Powell, who have worked closely to stabilize the economy since the pandemic began.

While the Treasury Department has the ability to end the programs, it does not have the sole authority to reallocate the funding for those programs and needed to secure Fed agreement.

On Friday, however, the Fed released a letter from Powell in which he said the central bank would comply with Mnuchin's request to close out the emergency loan programs and return the unused money appropriated by Congress to Treasury.

[Video not showing up above? Click here to watch » https://www.youtube.com/watch?v=JXHivB9Fpx0]

Powell said in his letter to Mnuchin that he is "pleased with all that we have accomplished together this year."

Powell said he agreed with Mnuchin's contention that the Fed could access funds if needed from a separate Fed account to provide emergency loans.

Mnuchin has defended his decision to end the programs, including the Main Street lending program and the municipal liquidity facility, arguing the funding should be redirected toward more distressed parts of the U.S. economy.

Mnuchin said Friday that Congress intended the programs to expire at the end of the year and that the central bank's interpretation was mistaken. Asked about the Federal Reserve's criticism by CNBC, Mnuchin fired back: "They weren't in the room. That's not their job."

Mnuchin also said the programs were no longer necessary given the recovery in U.S. credit markets and relative stabilization of the American economy. Biden's policy advisers strongly disputed that view of the economic outlook, citing extreme risks posed by the rising number of coronavirus cases and the expiration of federal protections, such as a moratorium on evictions, at the end of the year.

The split between the outgoing and incoming administrations on a key economic policy matter comes at a perilous moment for the country, with coronavirus cases surging and fears mounting of economic headwinds to businesses.

"The people who really need this support right now are not the rich corporations -- it's the small businesses; the people that are unemployed. Those are the people we need to help the next few months," Mnuchin said, calling on Congress to reappropriate the funding. "Let's go use this money in parts of the economy that need it."

Critics of the move say Mnuchin could have asked the Fed for some of its untapped money from the Cares Act while leaving the emergency lending programs intact. For example, of the $454 billion allotted from the Treasury Department under the Cares Act, only $195 billion has been specifically committed to cover the Fed's programs, leaving $259 billion that had not.

After the meeting, McConnell said he supported Mnuchin's decision.

"There is an obvious right use for these hundreds of billions of dollars of already allocated but unused funds," McConnell said in a statement.

"American workers should not lose their jobs needlessly when a second round of the job-saving Paycheck Protection Program for the hardest-hit small businesses would make a huge difference," McConnell said.

"They need flexibility to do lending on an emergency basis," Hogan said Friday on CNBC. "I don't really understand the motivation behind it; I think it's a mistake."

The central bank and Trump administration appear to be offering different views of the risks to the U.S. economy. The statement from the Federal Reserve on Thursday, which called for maintaining the "full suite" of emergency facilities, emphasized the need to backstop "our still-strained and vulnerable economy."

On Friday, Mnuchin struck a different tone, saying: "The medical emergency may not be over, but I think we'd agree the financial conditions ... are in great shape. Corporate bonds have come in; mortgages have come in; the stock market has rebounded."

Mnuchin also said he and Powell had discussed the issue "extensively" and strongly rejected criticisms that the decision was designed to handicap Biden. He added of Powell: "I'll let him speak for himself and clarify his remarks ... We're trying to follow the law as we're supposed to."

Information for this article was contributed by Jeff Stein and Rachel Siegel of The Washington Post; and by Martin Crutsinger and Christopher Rugaber of The Associated Press.