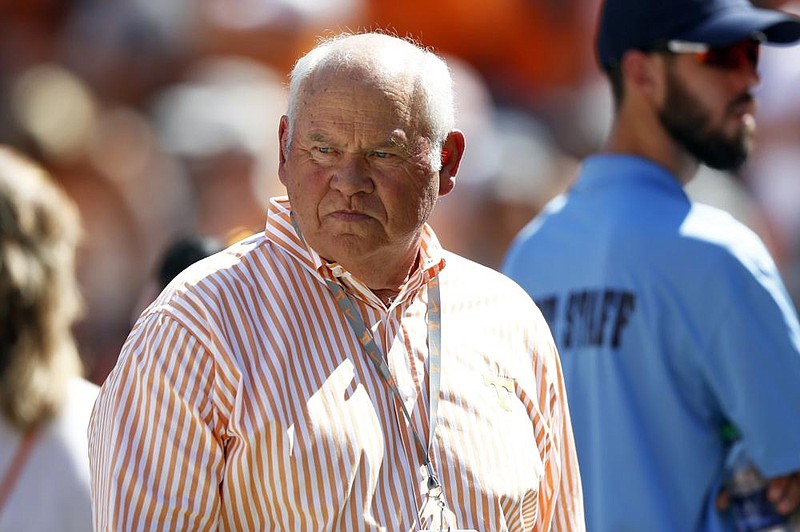 Tennessee Athletic Director Phillip Fulmer, a College Football Hall of Famer who coached the Vols for 17 years, announced Friday he has tested positive for covid-19 and is isolating. (AP file photo)

Tennessee Athletic Director Phillip Fulmer said Friday he is in isolation after testing positive for covid-19. And Miami's Manny Diaz became the latest active coach to announce he has contracted the virus.

Fulmer, 70, posted on Twitter that he is "feeling fine" and was deemed not to have been in close contact with any Tennessee athletes or "sport-specific staff members."

Tennessee plays at No. 23 Auburn today.

Fulmer is a College Football Hall of Famer who coached the Vols for 17 years and won a national championship in 1998. He has been Tennessee's AD since 2017.

Diaz made a similar social media post earlier to announce he tested positive for covid-19 and is isolating. Diaz, 46, said he will work virtually with the No. 12 Hurricanes until he can return to the field.

Miami is not scheduled to play again until Dec. 5 at Wake Forest. The Hurricanes this week were forced to postpone games scheduled for today and Nov. 28 because of coronavirus issues.

"I have tested positive for covid-19. I am currently in isolation and feeling good overall," Diaz tweeted.

Diaz was the second coach from a Power 5 school to publicly acknowledge testing positive this week, along with Maryland's Mike Locksley. Locksley's team, like Diaz's, had today's game called off because of covid-19 issues within the program.

As of Friday evening, 17 of the 62 games across major college football had been postponed or canceled. That's the most disrupted games in any week of this season, one more than last week.

The latest addition was Washington State's game at Stanford, which got canceled before the Cougars left for the Bay Area. The Cougars fell below the Pac-12 minimum of 53 scholarship players available due to positive coronavirus cases and contact tracing.

"I'm disappointed for our team and our players. They have battled through so much this year," Washington State Coach Nick Rolovich said in a statement. "We had a good week of practice and were excited to play this game. I recognize the pain they feel with this lost opportunity but this 2020 football team is a resilient group of young men."

Among the other active coaches to have said they tested positive for covid-19 are: Arkansas' Sam Pittman, Arkansas State's Blake Anderson, Florida's Dan Mullen, Florida State's Mike Norvell, Purdue's Jeff Brohm, Arizona's Kevin Sumlin, Kansas' Les Miles and Troy's Chip Lindsey, who will not be with his team when the Trojans play Middle Tennessee State today.

Alabama Coach Nick Saban also tested positive, but did not miss a game after that result was later deemed false.

Elsewhere in the Atlantic Coast Conference, Pittsburgh said its players will be outfitted with face coverings to use on the field and sideline during its home game against Virginia Tech today, in accordance with recent guidelines handed down by state officials in Pennsylvania.

Pitt later clarified that players will not be required to pull up the face coverings while they are competing.

In a statement, Penn State said the new orders include exceptions for competition to be played without face coverings "in the context of rigorous and stringent University and Big Ten testing, health and safety protocols." The Nittany Lions host Iowa today.

Diaz has said he believes the coronavirus numbers nationally "are really, really getting to a bad place." The Centers for Disease Control and Prevention said more than 1 million coronavirus cases have been diagnosed in the U.S. in the past week alone, numbers that -- when combined with soaring hospitalization rates -- prompted the CDC to urge Americans to curtail Thanksgiving travel and not partake in large gatherings with people from outside their household. 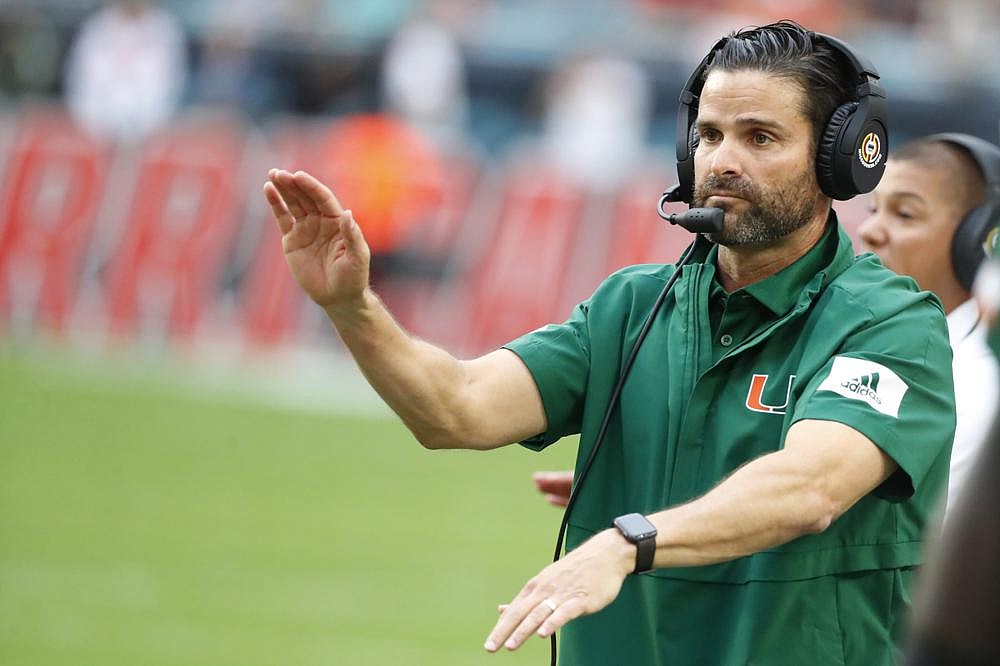 FILE - In this Saturday, Nov. 9, 2019 file photo, Miami head coach Manny Diaz calls out a play during the first half of an NCAA college football game against Louisville in Miami Gardens, Fla. Miami coach Manny Diaz told The Associated Press on Monday, Feb. 3, 2020 that he believes the Hurricanes are already better than they were when last season's 6-7 debacle ended. Diaz says the Hurricanes have improved their roster and their coaching staff, both by additions and subtractions. He also drew a parallel to the culture that the Miami Heat have stuck with in their bounceback season this year. (AP Photo/Wilfredo Lee, File)
ADVERTISEMENT