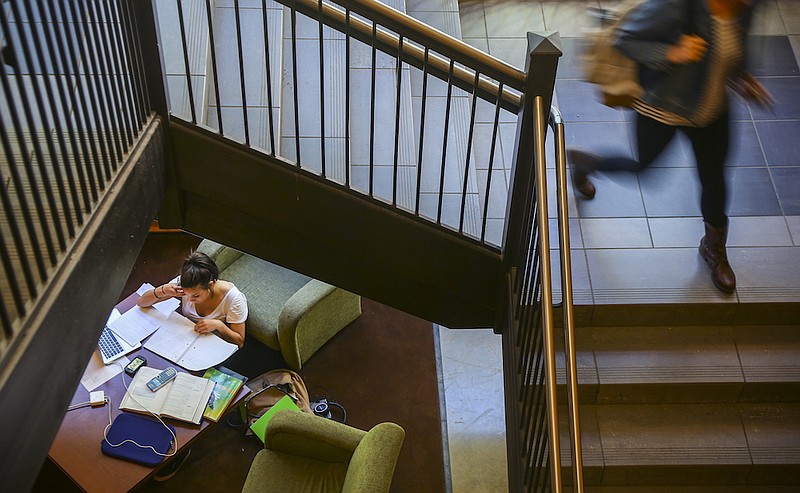 Hendrix College in Conway on Friday received a $15 million gift from the Windgate Foundation -- the largest outright gift in the private liberal arts university's history.

"We are grateful for the support of the Windgate Foundation," Hendrix President W. Ellis Arnold III said in a statement. "More than ever, it is critical that we continue moving forward, to meet today's challenges and to continue to be a leader in higher education in the future."

While the Windgate donation is the largest "outright" gift, the record for the largest gift of any nature in the college's history was made in 2015 when the estate of Mary Ann Dawkins gave $26 million. Outright gifts are those that are not made through an estate.

The college surpassed its $110 million campaign goal a year ahead of schedule with $114 million in gifts and pledges.

The funding campaign has helped to strengthen the academic and student life experience with new programs and initiatives, Arnold said. New facilities have been added to enhance the residential experience and support student recruitment.

"We have continued to make Hendrix more affordable and accessible for students and families," Arnold said in the statement.

About $10 million of the Windgate gift will provide endowed scholarships for Hendrix students.

As part of the campaign expansion, Hendrix will launch a multimillion-dollar residence hall renewal project, beginning with renovations of Veasey Hall. Fundraising efforts for the project will also support renovations of historic Martin Hall.

In addition, the expanded campaign -- called A Time to Lead: The Campaign for Today and Tomorrow -- will seek additional funds for the college's endowment.

"These priorities -- the Residence Hall Renewal Project and increasing the College's endowment -- will support student recruitment and retention," said Arnold in the statement.

"They will keep Hendrix accessible and affordable to students and families, and they will ensure that Hendrix remains one of the country's leading liberal arts colleges for academic quality, innovation, and value."

Arnold said the covid-19 pandemic has caused financial concerns for its students and their parents, so the "time for Hendrix to lead is now."

In October, the college reduced tuition by 32% for first-time students enrolling in the fall 2021 semester.

"We recognize that Hendrix is still a significant investment," said Ryan Cassell, vice president for enrollment.

"Reducing tuition is part of a comprehensive commitment to keeping Hendrix within reach for students and families."

Hendrix will continue to offer competitive academic and need-based scholarships and financial aid to students who apply and are accepted, Arnold said.

In response to current students whose residential experience was disrupted by covid-19, Hendrix developed a tuition-free fifth-year program.

Undergraduates enrolled full time who have completed at least three course credits per semester during the spring and fall 2020 and spring 2021 semesters will be eligible for a fifth year of study with a full tuition waiver. The students are responsible for fees and room and board.

Arnold said these recent offerings are just two examples of how Hendrix is leading today.

"We must continue to lead in quality, innovation, and value," he said. "The Residence Hall Renewal Project will reinforce the vital role of the residential campus experience at Hendrix and growing our endowment will strengthen the College's financial position to support students today and tomorrow."

The Little Rock-based Windgate Foundation has provided more than $890 million in grants since 1993, according to its website. The largest Arkansas recipients include the Crystal Bridges Museum of Art in Bentonville, to which the organization recently gifted $17.5 million.

Messages left for the organization seeking comment were not returned as of late Friday.