Mideast allies warned to be alert but stand down during unpredictable period by QASSIM ABDUL-ZAHRA AND SAMYA KULLAB THE ASSOCIATED PRESS | November 21, 2020 at 5:07 a.m.

A supporter of pro-Iranian militiamen stands Jan. 1 near a poster of Qais al-Khazali, the leader of the militant Shiite group League of the Righteous, during a sit-in in front of the U.S. Embassy in Baghdad. (AP/Khalid Mohammed)

BAGHDAD -- Iran has instructed allies across the Middle East to be on high alert and avoid provoking tensions with the U.S. that could give an outgoing Trump administration cause to launch attacks in the president's final weeks in office, Iraqi officials have said.

Iran's allies have collectively welcomed Trump's election defeat. Under his presidency, tensions with Iran escalated, reaching fever pitch at the beginning of the year with the U.S. airstrike that killed Iran's top general, Qassim Soleimani, at the Baghdad airport. Iran launched a ballistic missile attack in response to the fatal drone strike, targeting U.S. soldiers in Iraq and wounding dozens.

In 2018, Trump unilaterally withdrew America from Iran's nuclear deal with world powers, meant to prevent it from developing nuclear weapons, and reimposed punishing sanctions on Iran, crippling its economy.

Iran has since abandoned all limits on its uranium enrichment program, even as the deal's other international partners have tried to salvage it. The incoming Biden administration has stated plans to rejoin or renegotiate the 2015 nuclear accord.

But there is growing concern over what Trump, who is refusing to concede the election, might do in the last days of his presidency -- including a potential strike on America's enemies abroad. On Thursday, an adviser to Iran's supreme leader warned in an interview that any American attack on Iran could set off a "full-fledged war" in the region.

"We don't welcome war. We are not after starting a war," said Hossein Dehghan, who served in Iran's paramilitary Revolutionary Guard before becoming a defense minister under President Hassan Rouhani.

The concern does not appear to be rooted in anything concrete -- Trump has, in fact, ordered a drawdown in U.S. troops in Iraq and Afghanistan to be completed by mid-January -- but rather in general nervousness about the unpredictability of Trump's actions. His firing of Defense Secretary Mark Esper two days after the election triggered a flurry of speculation about whether it was related to a broader plan to strike abroad.

Iraq, where the U.S.-Iran rivalry has chiefly played out, is seen as a potential arena. Frequent attacks against the U.S. Embassy in Baghdad in recent months led a frustrated Trump administration to threaten to close the mission, a move that sparked a diplomatic crisis and back-channel messaging that led to an informal truce a few weeks ahead of the U.S. election.

With two months to go until a Biden administration takes over, Iranian Gen. Esmail Ghaani, head of the Guard's expeditionary Quds Force, delivered Tehran's request during a meeting with Iranian-backed Iraqi militia factions and Shiite politicians in Baghdad this week, according to two senior Iraqi Shiite politicians who attended the meetings in Baghdad.

The message: Stand down to avoid giving Trump the opportunity to initiate a fresh tit-for-tat round of violence.

And to the Iraqi Shiite paramilitaries: Be calm and cease attacks for now against the American presence in Iraq.

However, if there was a U.S. aggression by the Trump administration, Iran's response would "be in line with the type of strike," one of the Iraqi politicians cited Ghaani as saying.

An Iraqi government official also confirmed Ghaani's meetings with Iranian-backed factions in Iraq this week. All Iraqi officials spoke on condition of anonymity to discuss the private meetings.

Meanwhile in Lebanon, the leader of the Iran-backed militant Hezbollah group, Hasan Nasrallah, warned followers and allies to be vigilant during Trump's remaining weeks in office.

"All of us ... should be on high alert in these next two months so that it passes peacefully," Nasrallah said in televised remarks earlier this month even as he urged followers to "be prepared to face any danger, aggression or harm" and to respond in kind "if the U.S. or Israel's follies go that far."

But only hours after Ghaani delivered Iran's message in Baghdad -- and while he was still in Iraq -- a barrage of Katyusha rockets were fired at the Iraqi capital's heavily fortified Green Zone, landing a few hundred yards from the U.S. Embassy. A few of the rockets killed a child and wounded five civilians.

A little-known militia group, Ashab al-Kahf, believed to have links with the powerful Kataib Hezbollah, claimed responsibility for the rocket attack. For its part, Kataib Hezbollah denied it had carried out the barrage, and claimed the truce initiated in October was still in place.

That claim was countered by Qais al-Khazali, the head of the powerful Iran-aligned Asaib Ahl al-Haq militia group, who said in a televised interview Thursday that the truce had ended. 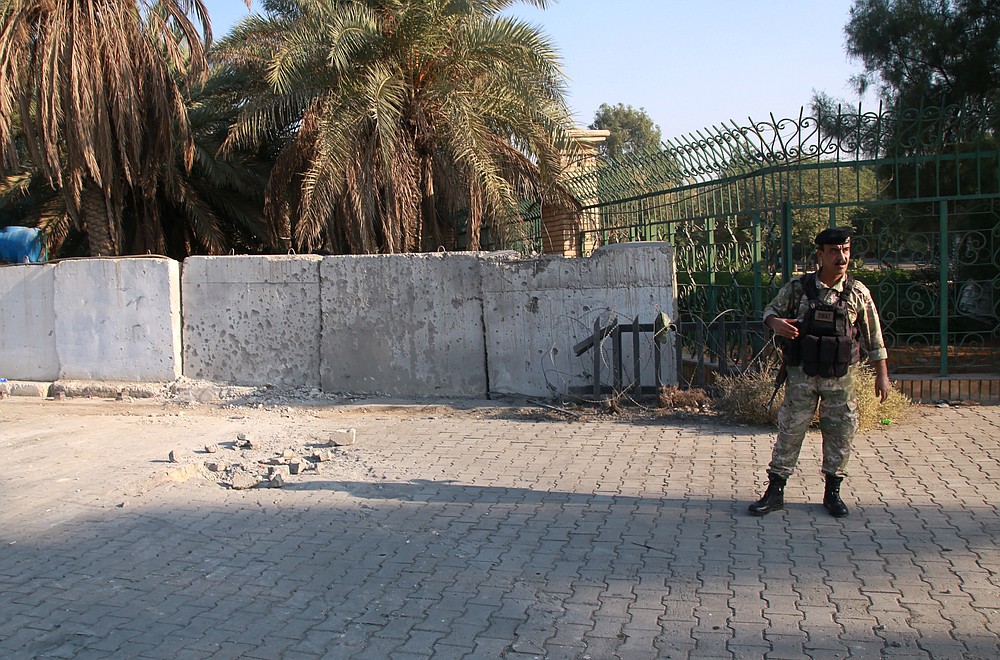 An army soldier inspects the scene of the rocket attack at the gate of al-Zawra public park in Baghdad, Iraq, Wednesday, Nov. 18, 2020. Rockets struck Iraq's capital on Tuesday with four landing inside the heavily fortified Green Zone, Iraq's military said, killing a child and wounding at least five people, signaling an end to an informal truce announced by Iran-backed militias in October.(AP Photo/Khalid Mohammed) 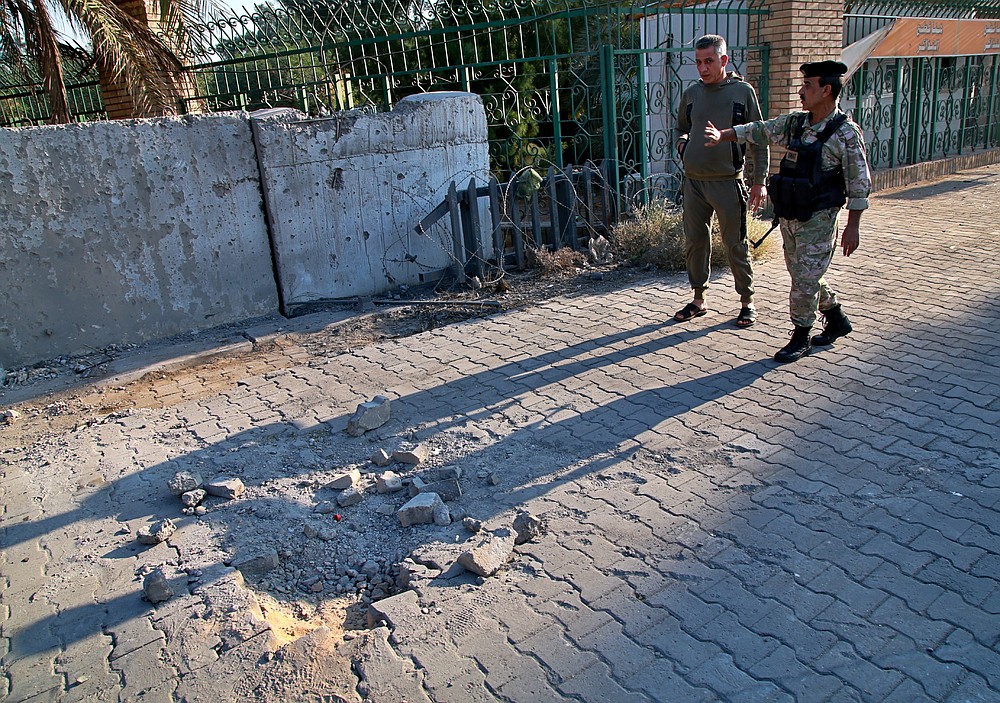 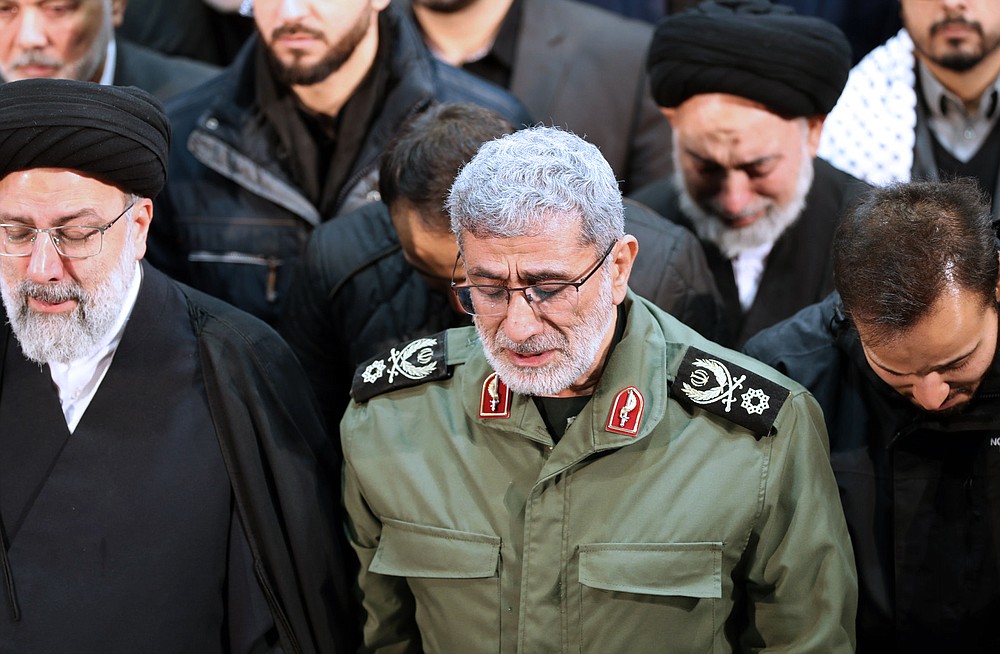 FILE - In this photo released by the official website of the Office of the Iranian Supreme Leader, Gen. Esmail Ghaani, newly appointed commander of Iran's Revolutionary Guards Quds Force, weeps while praying over the coffin of the force's previous head Gen. Qassem Soleimani at the Tehran University Campus in Tehran, Iran, Monday, Jan. 6, 2020. On Friday, Nov. 20, two Iraqi officials say Iran has instructed allies in the Middle East to be on high alert and avoid provoking tensions with the U.S. that could give an outgoing Trump Administration cause to launch attacks in his final weeks in office. (Office of the Iranian Supreme Leader via AP)
ADVERTISEMENT