Kings' contract with Fox worth $163M for 5 years 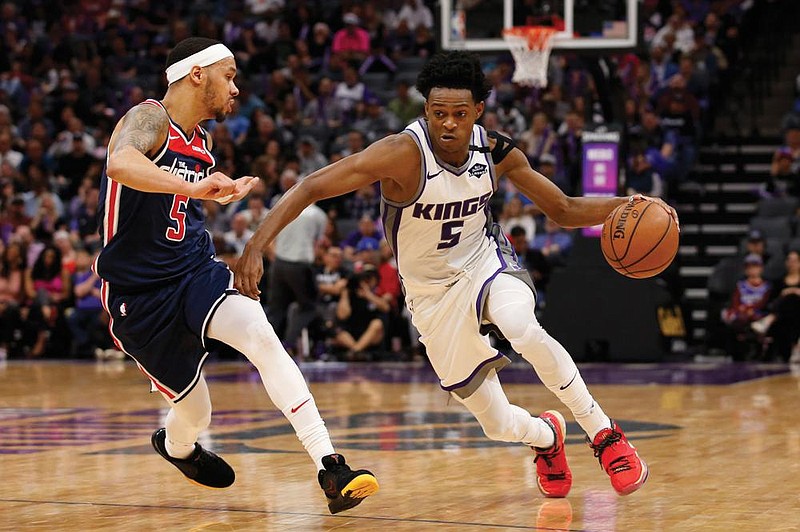 On the first night of free agency, De'Aaron Fox was the first huge winner.

Fox and the Sacramento Kings agreed on a max deal Friday night, agent Chris Gaston said. It's a five-year pact that will pay Fox $163 million, and that figure could rise to nearly $200 million if Fox makes an All-NBA team or receives other league honors.

Fox's numbers have improved in each of his three NBA seasons. He averaged 11.6 points as a rookie, then 17.3 points two seasons ago and finally 21.1 points last season for the Kings. His field goal percentage has also risen in each of the last two seasons.

Free agency opened in the NBA on Friday at 5 p.m. Central. No deals can be signed until 11:01 a.m. Sunday, and many of the biggest available names -- such as the Lakers' Anthony Davis and Fred VanVleet, who has seen his star rise meteorically with the Toronto Raptors -- did not make immediate decisions on their futures.

Davis is expected to remain with the Lakers; the question there is how the new deal will be structured. VanVleet is expected to command at least $80 million over the next four seasons, if not more, and Toronto has made clear that they would like to keep the undrafted guard who became a huge part of the Raptors' run to the 2019 NBA championship.

A breakdown of moves Friday:

Danilo Gallinari -- one of the top wings on the free-agent market -- agreed to a three-year contract worth $61.5 million, a person with knowledge told the AP.

Gallinari averaged 18.7 points for Oklahoma City last season and is a 38% career shooter from three-point range.

Gallinari, a 32-year-old Italian, has also played with the Knicks, Nuggets and Los Angeles Clippers. He was originally the sixth overall pick in the 2008 draft by New York.

The Mavericks and Trey Burke have agreed on a $10 million, three-year contract to bring the guard back after he played well in the NBA bubble.

Burke originally joined Dallas in the trade with New York headlined by Kristaps Porzingis in early 2019. The Mavericks didn't re-sign Burke before last season, and he ended up in Philadelphia.

The 76ers waived Burke in February before the coronavirus shutdown, and Dallas signed him before the restart after center Willie Cauley-Stein opted out of the finish to the season.

The Heat got quick agreements from point guard Goran Dragic and center Meyers Leonard on two-year deals, the second year in both cases being team options. Dragic will make about $18 million next season, Leonard about $9 million.

"I simply appreciate that they care about the little things," Leonard said.

Dragic flew back to Miami from his native Slovenia on Friday and intends to sign his new contract quickly. He said the fact that the Heat will have much of its roster back from a year ago, when the team won the Eastern Conference title, was particularly important to him.

The Timberwolves reached a $60 million agreement with restricted free agent shooting guard Malik Beasley that's for three years plus a team option for a fourth year.

Beasley, who was acquired from the Denver Nuggets in a four-team trade in February, was charged last month with drug possession and threats of violence after allegedly aiming a rifle at a family in their vehicle outside his Minnesota home where a large amount of marijuana and other guns were seized during a police search.

Beasley averaged 20.7 points in 14 games after arriving in Minnesota.

The Timberwolves also finalized and confirmed three draft-night trades, including the deal with Oklahoma City reuniting them with point guard Ricky Rubio.

A person with knowledge of the negotiations said the Magic and guard Dwayne Bacon agreed on a one-year deal for about $2.5 million this coming season. The Magic hold a team option for 2021-22.

Veteran center Dwight Howard is going to join the 76ers on a one-year deal worth the veteran's minimum of $2.6 million, agent Charles Briscoe told AP.

Howard heads to Philadelphia after helping the Los Angeles Lakers win this past season's NBA title.

Jordan Clarkson is staying and Derrick Favors is coming back.

Clarkson agreed to a four-year, $52 million deal; he averaged 15.6 points in 42 games after getting traded to Utah last December. And Favors -- a post player who spent most of his NBA career in Utah before playing with New Orleans last season -- returned on a deal that will pay him nearly $30 million for three seasons. 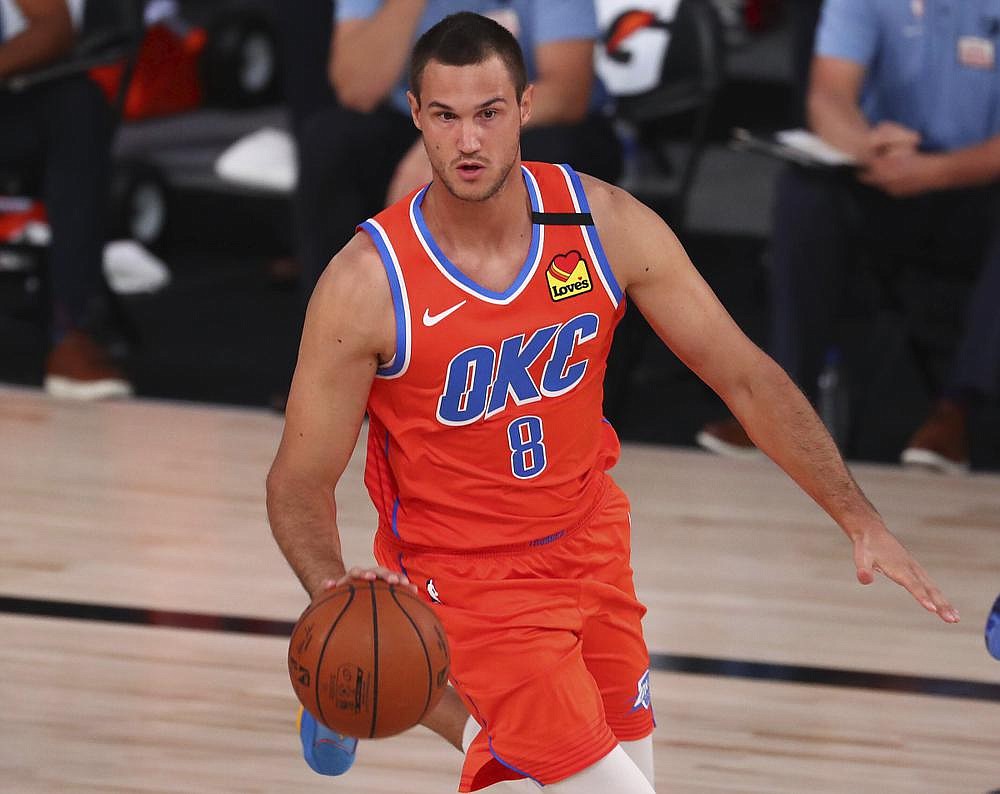 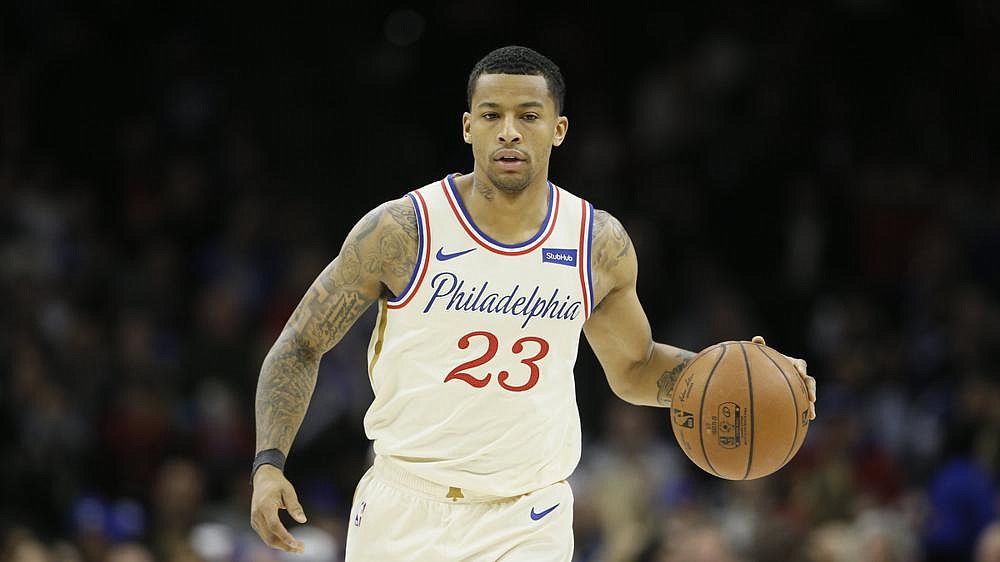 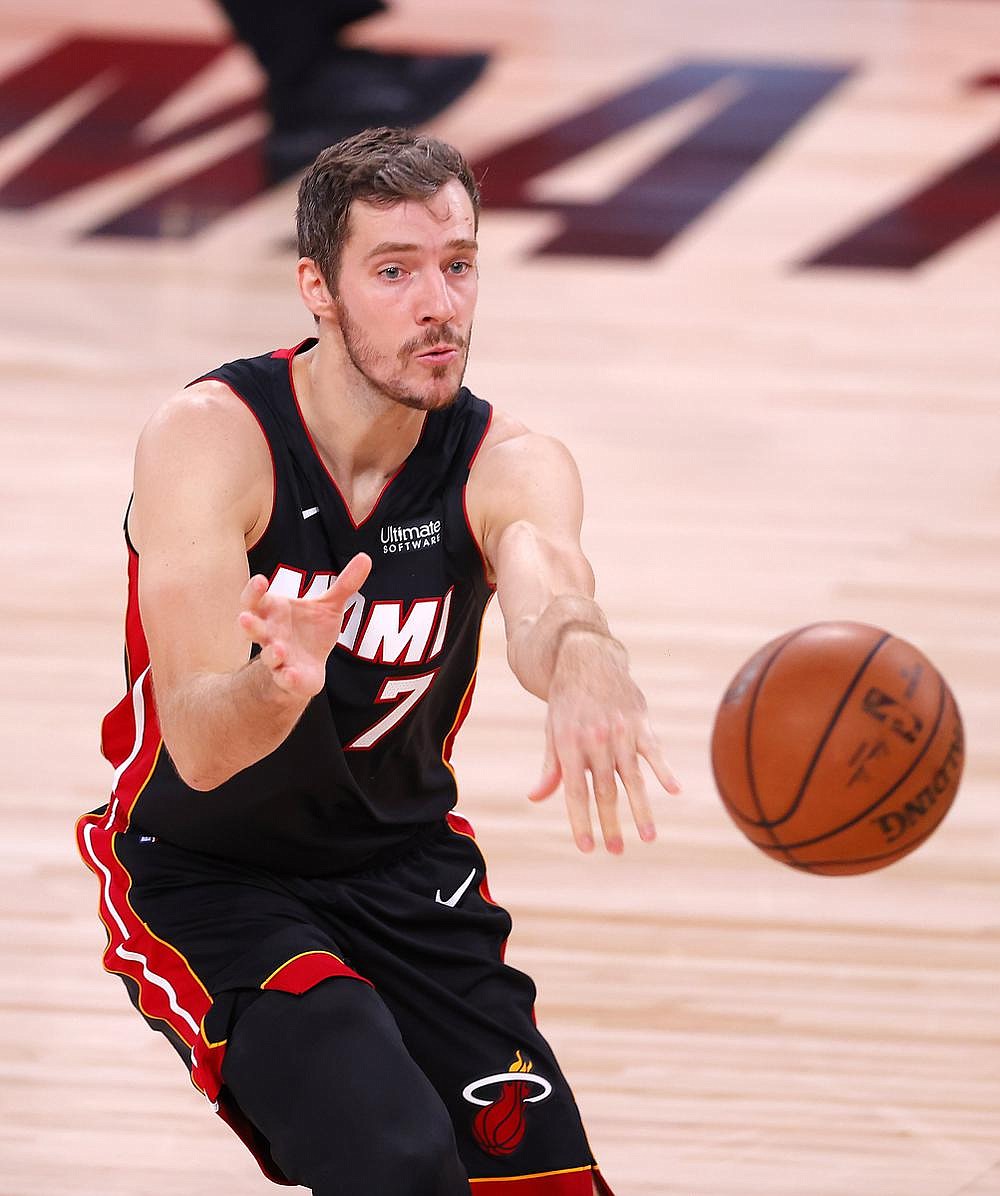 Goran Dragic of the Miami Heat handles the ball during the first half of Game 1 of an NBA basketball first-round playoff series, Tuesday, Aug. 18, 2020, in Lake Buena Vista, Fla. (Mike Ehrmann/Pool Photo via AP) 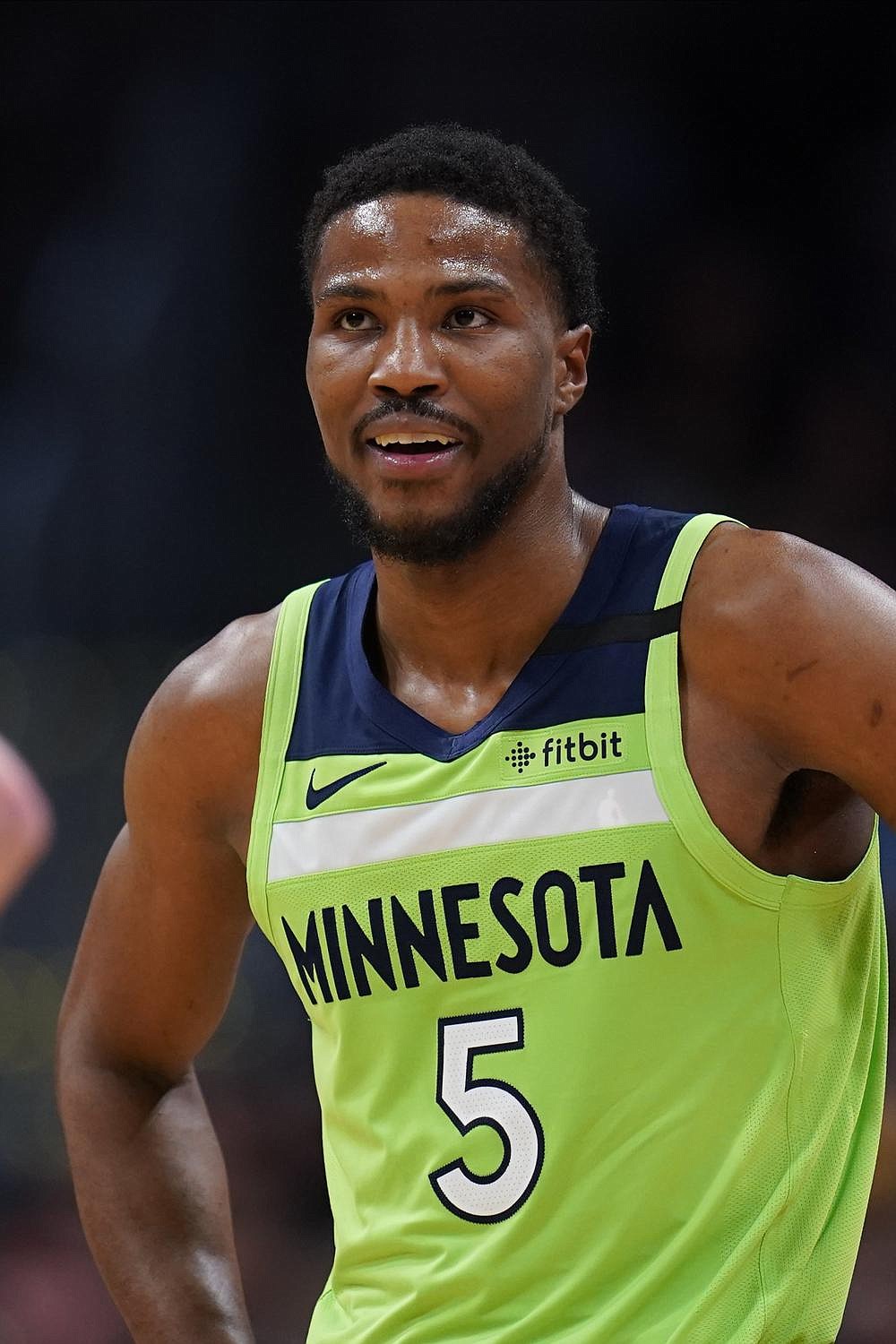 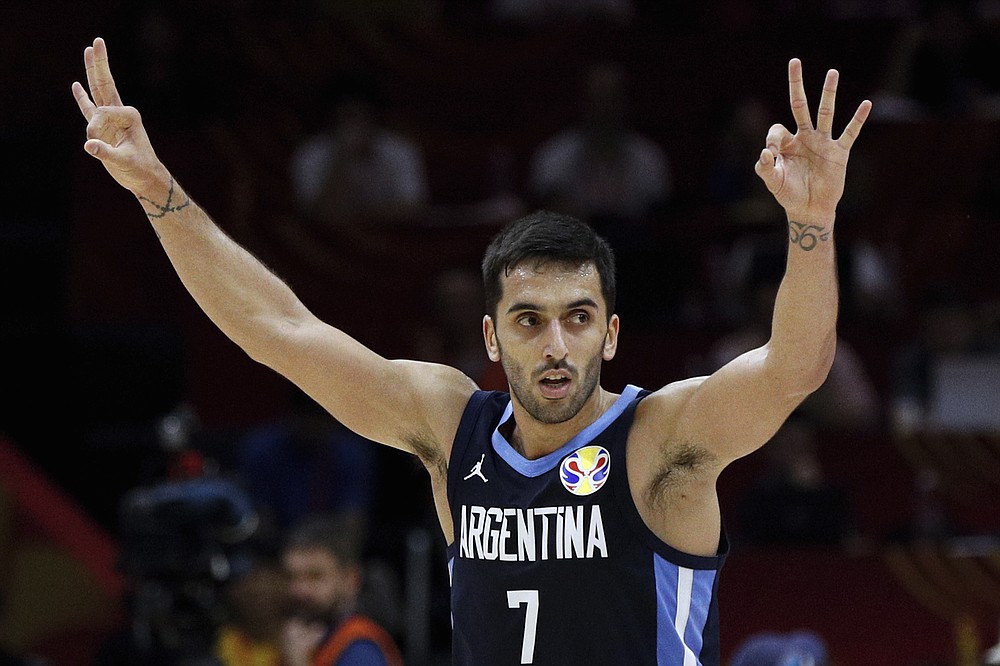 FILE - In this Sept. 4, 2019, file photo, Facundo Campazzo of Argentina celebrates after a teammate's 3-pointer against Russia during their Group B match in the FIBA Basketball World Cup at the Wuhan Sport Center in Wuhan in central China's Hubei province. Campazzo agreed to a two-year deal with the Denver Nuggets on Friday, Nov. 20, 2020, the opening day of free agency, according to a person with direct knowledge of the deal. The person spoke to The Associated Press on condition of anonymity because the contract remains unfinished until at least Sunday, when the NBA moratorium on new signings will be lifted. (AP Photo/Andy Wong, File) 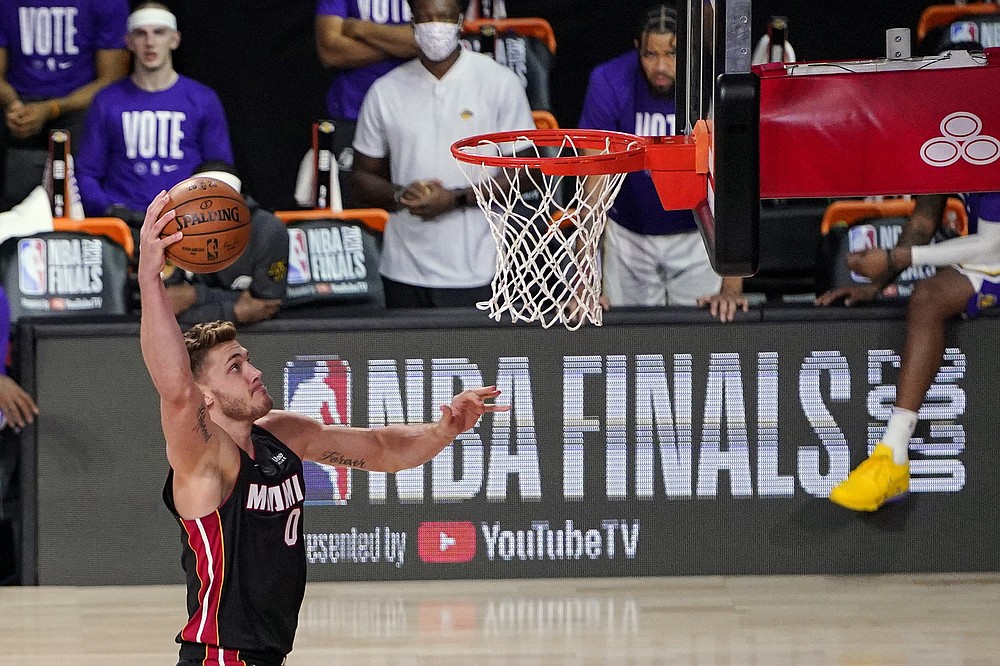 FILE - In this Oct. 4, 2020, file photo, Miami Heat's Meyers Leonard (0) shoots against the Los Angeles Lakers during the second half in Game 3 of basketball's NBA Finals in Lake Buena Vista, Fla. Leonard and Goran Dragic have both decided to return to the Eastern Conference champions, each telling The Associated Press on Friday evening, Nov. 20, 2020, that they have agreed to accept Miami’s offer of two-year deals -- the second year is a team option on both contracts -- to remain with the Heat. (AP Photo/Mark J. Terrill)
ADVERTISEMENT