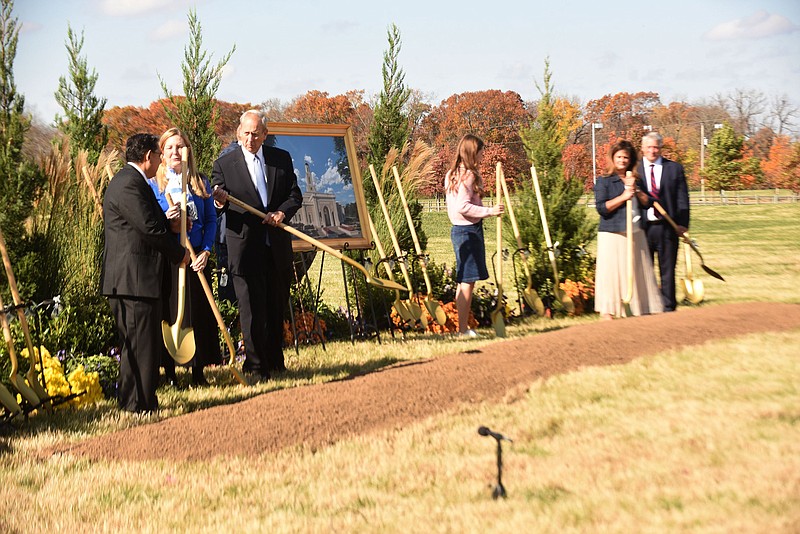 Elder David Harris (third from left) and his wife, Lisa, gather with others on Saturday Nov. 7 2020 for the temple groundbreaking. (NWA Democrat-Gazette/Flip Putthoff)

"Groundbreaking is an interesting word," mused James Martino, president of the North America Southeast Area of the Church of Jesus Christ of Latter-day Saints. "According to sources, groundbreaking was considered a representation of breaking the earth, to make a sacred deposit that would endorse a firm foundation. How appropriate a description. Truly, this is the symbolic act to begin a foundation for a most sacred building."

Martino was among speakers earlier this month when ground was broken at 1101 McCollum Road in Bentonville for the first Latter-day Saints temple in Arkansas.

"This is a moment that for most of my life, I never could have imagined. ... I find it hard to believe what we're celebrating and the service that we're participating in today, and it's also a moment that I wish would never end," said David Bednar, a member of the Quorum of the Twelve Apostles who presided over the groundbreaking remotely.

According to the church, temples differ from meetinghouses or chapels where members meet for Sunday worship services. Each temple is considered a "house of the Lord," where Jesus Christ's teachings are reaffirmed through baptism and other ordinances that unite families for eternity. In the temple, Church members learn more about the purpose of life and make covenants to follow Jesus Christ and serve their fellow man.

"For the past 13 years, we have lived in Northwest Arkansas and traveled about 3 ½ hours each way to either Oklahoma City or Kansas City to get to the closest temples," said Michelle Gonzalez, a lifelong member of the Church of Jesus Christ of Latter-day Saints who lives in Bentonville. "This meant arranging babysitting and a full day of travel just to have an hour or two inside [the temple] every month. That's how special it is to us.

"We and many other families have prayed for a temple here for a long time," she added. "My family is immensely grateful and excited that we will have one so close. We believe each temple is the house of the Lord. I know that every time I attend I come back spiritually charged, and the concerns of the world seem to melt away when I'm there.

"My understanding is expanded, and I come out filled with hope to face the day-to-day challenges to guide my family in truth and righteousness," Gonzalez said. "And I feel closer to my Savior Jesus Christ and my Heavenly Father and loved ones who have passed."

According to Simon Keogh, stake president of the Bentonville Stake, "locations for temples are selected based on a combination of factors. While there is no specific minimum number of church members required, it's generally the case that temples are built in regions where membership is spread across at least 50 congregations. Membership in Northwest Arkansas has enjoyed significant growth in recent years, including both new members and those who have relocated from other areas."

A former University of Arkansas professor, Bednar helped organize two stakes -- a group of congregations -- in Arkansas, including the Bentonville stake. He said that in the fall of 1980, the congregation in Northwest Arkansas consisted of about 30 people and held Sunday meetings in the old Rogers high school cafeteria.

"Now in the same geography, there are 29 full-size congregations, generally around 300 people each," he said. The church counts more than 32,000 Latter-day Saints in Arkansas, spread throughout nearly 70 congregations.

The site on McCollum Road in Bentonville was selected for the 25,000-square-foot temple, Keogh said, because the church has owned land there for more than a decade.

"This site is adjacent to an existing [meetinghouse] and is conveniently located with easy access to I-49," Keogh said. "By co-locating the temple, certain infrastructure such as parking will be shared between the two facilities."

Formal plans were announced for the temple in October 2019, and it's expected to be completed in two to four years.

The Bentonville groundbreaking was unique in that it was the first time the ceremony was presided over remotely due to coronavirus concerns. Bednar was in Salt Lake City, and only a small group of church leaders was on-site.

"Like all organizations, the church has been [affected] by covid-19," Keogh said. "In-person meetings were curtailed in the early days of the pandemic, and church members adjusted to a more 'home-based' worship for several months.

"While the covid-19 pandemic has certainly brought many challenges to our members ... it has also given us an opportunity to spend more time together as families and look for ways to serve outside of ourselves," Keogh said, pointing to a multi-community drive-through food drive as one of the Bentonville Stake's success stories.

"As public meetings in Northwest Arkansas return, there will be certain adjustments made to promote the safety of members," he said, adding that "many church members have noted that these months of in-home worship have actually deepened their faith, their knowledge and their personal commitment as they have sought to worship on their own."

"Yes, we love the temple, we love to see the temple, we want to be in the temple, but not because just of the building, but because of the covenants and the ordinances [promises and ceremonies] that provide access for us in our daily lives to the power of godliness," Bednar said.

In the dedicatory prayer, Bednar prayed, "that this location will be hallowed, that it will be safeguarded and protected. And that it will be a place of great spiritual power."

Becca Martin-Brown is Features editor for the Northwest Arkansas Democrat-Gazette. Email her at bmartin@nwadg.com. 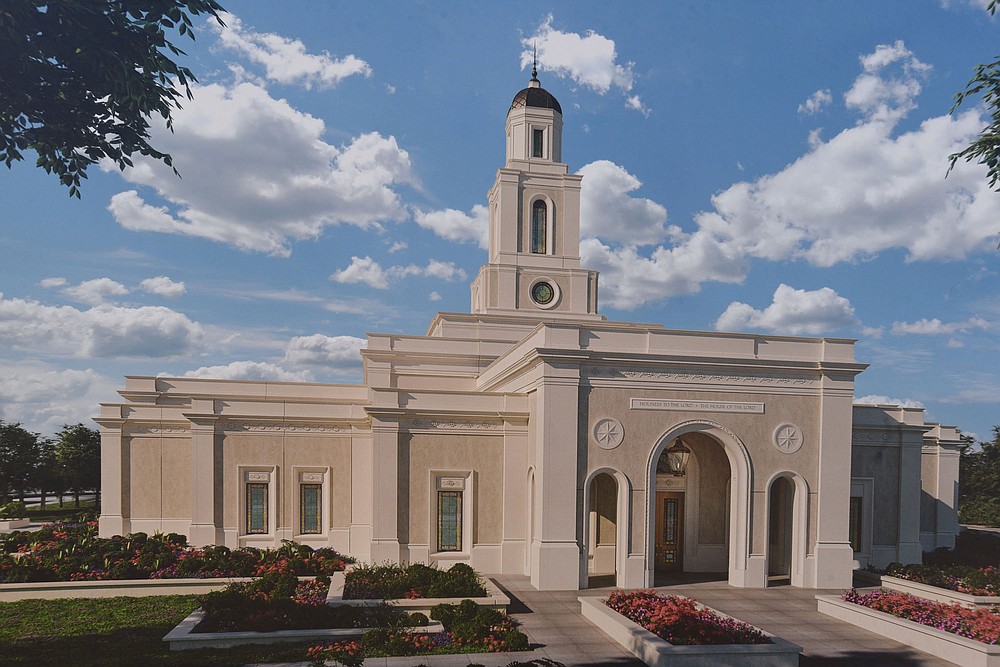 Artwork of Arkansas' first Mormon temple, to be built in Bentonville. 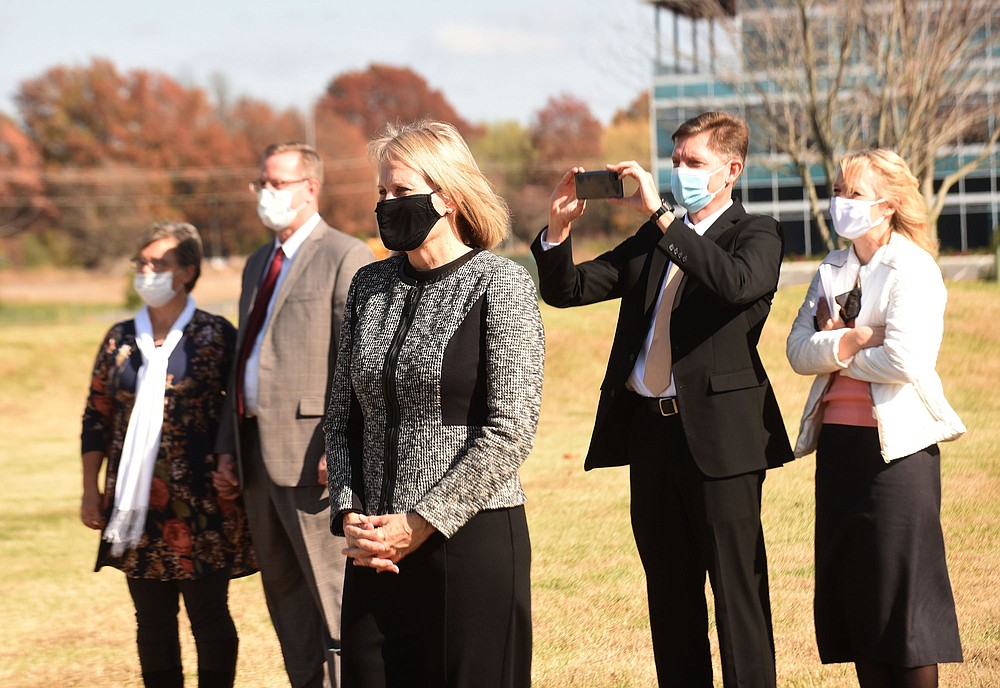 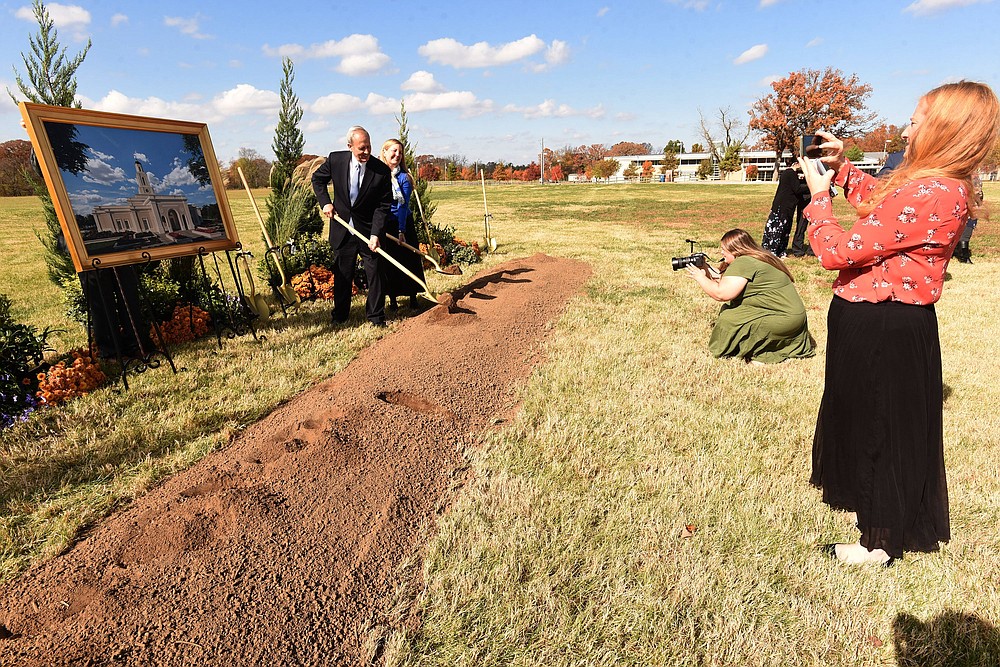 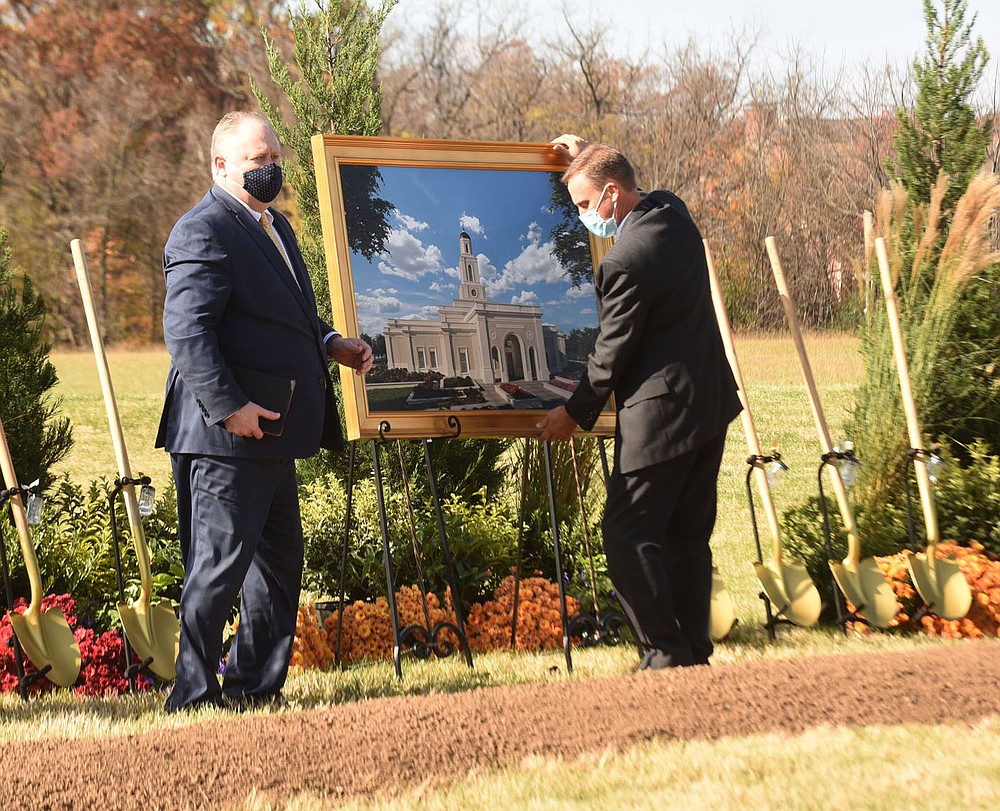 Artwork of Arkansas' first Mormon temple, to be built in Bentonville, is put in place Saturday Nov. 7 2020 for the groundbreaking. (NWA Democrat-Gazette/Flip Putthoff)
ADVERTISEMENT