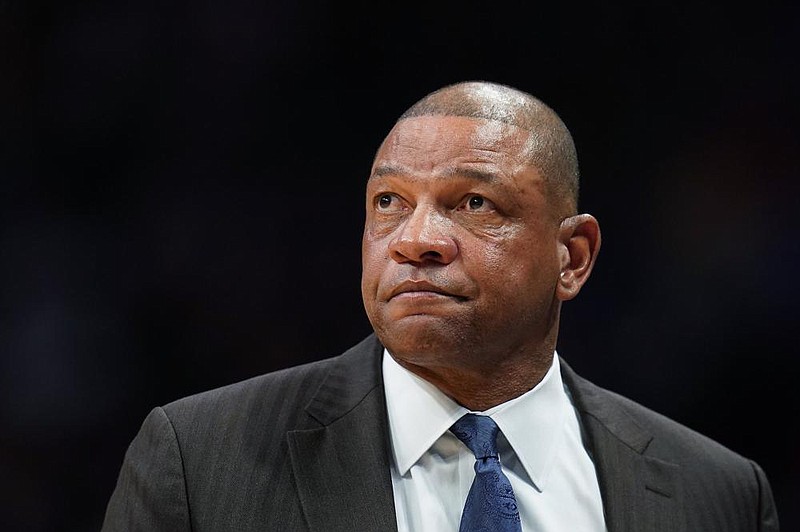 FILE - In this Jan. 12, 2020, file photo, former Los Angeles Clippers coach Doc Rivers watches during the second quarter of the team's NBA basketball game against the Denver Nuggets in Denver. The Philadelphia 76ers have reached an agreement with Rivers to become their new coach. Rivers reached a deal Thursday to become the latest coach to try to lead the Sixers to their first NBA championship since 1983, a person with direct knowledge of the negotiations told The Associated Press. The person spoke to the AP on Thursday on condition of anonymity because the Sixers had not formally announced the move. (AP Photo/Jack Dempsey, File)

FAYETTEVILLE -- Isaiah Joe is going from playing for University of Arkansas Coach Eric Musselman to playing in the NBA for one of Musselman's mentors.

Joe will start his professional career with Philadelphia and Doc Rivers, who is going into his first season as the 76ers' head coach, but his 22nd season of leading an NBA team.

Rivers became an NBA head coach for the first time during the 1999-2000 season with the Orlando Magic. Musselman was one of Rivers' assistant coaches after being retained from Chuck Daly's staff.

The Magic finished 41-41 in Rivers' first season and missed the playoffs, but he was voted NBA Coach of the Year by the media. Orlando had been expected to be one of the NBA's worst teams after veterans Penny Hardaway, Horace Grant and Nick Anderson were traded to reduce payroll for a major rebuilding project.

"Doc is someone I look up to," said Musselman, an NBA head coach with Golden State and Sacramento. "He's the best pregame motivator that I've ever been around. He used to do a lot of boxing clips and having boxing themes that we've used throughout the years.

"When I was with him, it was his first time as a head coach, and he's turned into what I believe is the best after timeout diagrammer of plays as there is in the NBA."

Rivers has a 943-681 record while leading Orlando, Boston and the Los Angeles Clippers. His 16 playoff appearances as a coach are highlighted by the 2008 NBA championship with the Celtics.

Musselman said Joe, a 6-5 guard from Fort Smith who averaged 16.9 points for the Razorbacks as a sophomore, is fortunate to have Rivers as his first NBA coach.

"Doc Rivers, in my opinion, I don't know how you could play for a better coach as a rookie," Musselman said. "Doc's just so approachable and personable. I think it's a great match with Isaiah."

Rivers was hired by the Sixers on Oct. 3 after he and the Clippers mutually parted ways.

"Now you have a rookie coming into a situation with a new coach, all at the same time, rather than a coach that's been in that [same] spot," Musselman said of Joe joining Rivers in Philadelphia. "Everything's going to be new for all the Sixers players, including the rookies.

"It's really difficult for a rookie when he comes into an established situation where all the veterans know the scheme."

Musselman said former Arkansas guard Mason Jones, who wasn't drafted despite averaging 22.0 points as a junior last season to lead the SEC in scoring and is going to Houston as a free agent, also will benefit from the Rockets having a new coach in Stephen Silas.

"They're all going to be learning at the same time [as veteran players]," Musselman said of Joe and Jones. "That's a huge factor for them.

"I told him that the truth of the matter is, it doesn't matter now if you were drafted or not," Musselman said. "The bottom line is, you've got to go to training camp and you've got to produce.

"But Houston's a great place for Mason, because No.1 they have for a long time now valued guys that are fighting to make the league. They've really valued players that have gone through the minor-league system with them."

Jones signed a two-way contract with the Rockets, meaning he'll be paid different amounts depending on whether he's with Houston or the franchise's G League team -- the Rio Grande Valley Vipers -- in Edinburg, Texas.

"Houston's probably done a better job than any of the G League with their parent team," Musselman said.

Musselman said the Arkansas coaching staff is working to help guard Jimmy Whitt -- who averaged 14.0 points and 5.1 rebounds as a senior graduate transfer for the Razorbacks last season -- get a shot to go to training camp with an NBA team.

"With Jimmy, we're going to continue to call teams, and there's one team in particular that myself and Coach [Clay] Moser have had some conversations with," Musselman said. "But we'll just keep trying to promote and help.

"Jimmy's way into the league will be to try to fight his way onto a roster through a veteran's camp. If not, it's going to have to be through the G League. But the great thing is, Jimmy is aware of that. He understands where his career is at, and he just wants an opportunity."

Musselman, who in practice has been wearing masks and T-shirts sent to him by pro teams in several sports, on his Twitter account posted photos of himself in 76ers gear on Wednesday -- a few hours before Joe was drafted by Philadelphia.

In the post, Musselman praised Rivers' motivational skills and Philadelphia point guard Ben Simmons, the No. 1 overall pick in the 2016 NBA Draft who was recruited to LSU by new Arkansas assistant coach David Patrick.

"Doc Rivers motivational and pregame speeches are incredible,' Musselman tweeted. "Always love watching him build a championship culture. @BenSimmons25 is the epitome of position-less basketball in the @NBA today.

"Thanks for the mask and gear @sixers!#MaskUp." 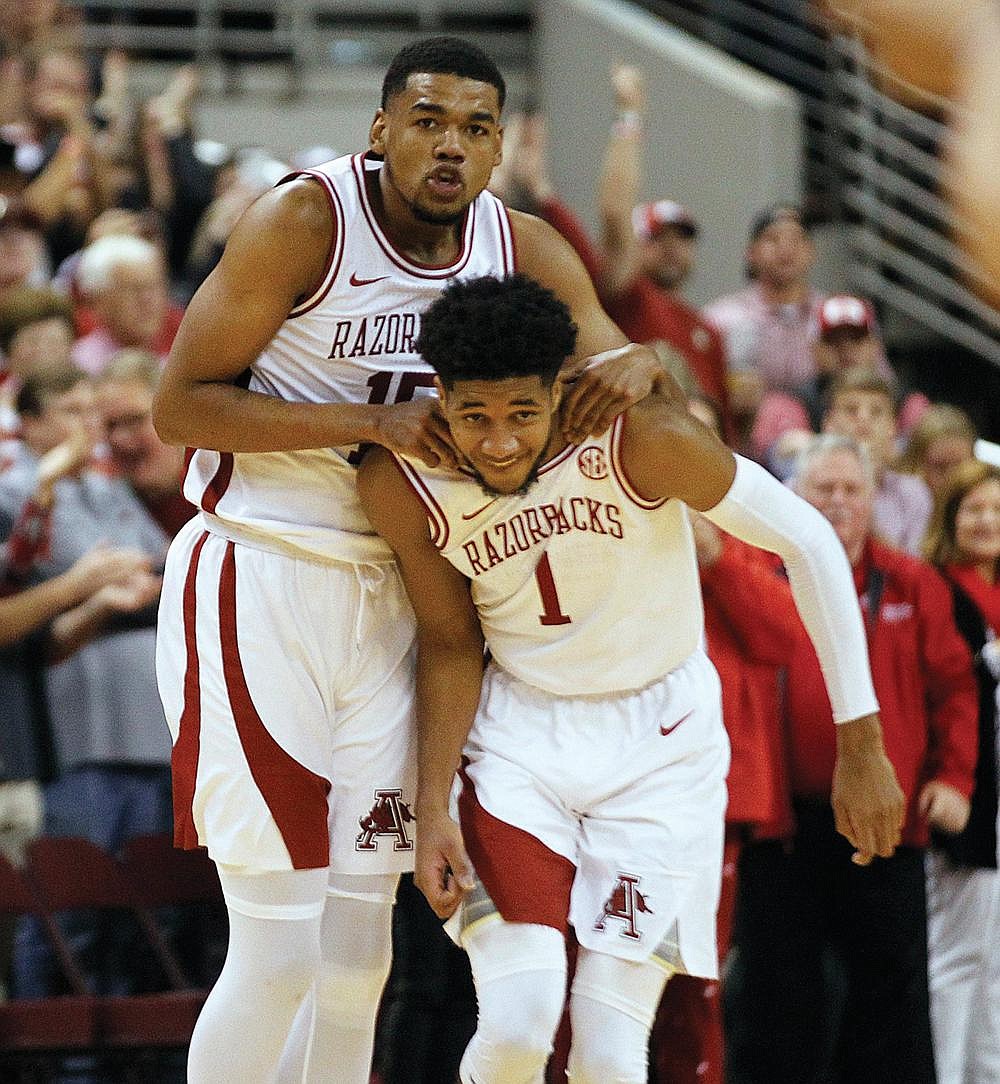 Former Arkansas guards Isaiah Joe (right), who was drafted Wednesday by Philadelphia, and Mason Jones, who is headed to Houston as a free agent, will benefit from going to teams with new head coaches, Arkansas Coach Eric Musselman said. Veteran Coach Doc Rivers leads the 76ers, and the Rockets are under the direction of Stephen Silas. (Special to NWA Democrat-Gazette/David Beach)
ADVERTISEMENT