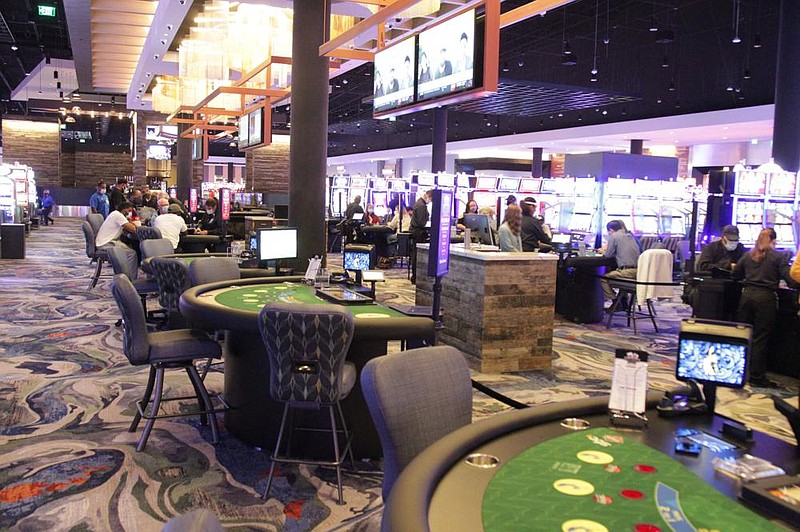 Early Friday afternoon, the gambling tables at Saracen Casino Resort were doing a brisk business. Open for 11 days in October, the casino took in an average of $3.6 million a day in revenue. “Without covid, it’s ‘Katy, bar the door,’” Chief Market Officer Carlton Saffa said of the restrictions the casino currently operates under. “We’ll only go up from there.” (Pine Bluff Commercial/Dale Ellis)

Despite covid-19 restrictions limiting attendance, stringent cleaning protocols and an uncertainty over how much further the coronavirus will spread, Saracen Casino Resort is reporting strong revenue.

Carlton Saffa, chief market officer for the newly opened casino, said revenue was good for the 11 days in October that the casino was open, and he said he expects November receipts to be equally robust.

The state's three casinos -- Oaklawn, Southland and Saracen Annex -- were ordered to close in mid-March because of the coronavirus pandemic, and they were allowed to reopen at 33% capacity on May 18. Wagers at Saracen Annex, which has 300 slot machines, totaled just over $14 million during the 12 days of May the annex was opened, then rose to $35 million the following month. Then, just short of $43 million was reported in July, $46 million in August and almost $45 million in September, according to numbers reported to the state Racing Commission, which oversees casino gaming in Arkansas.

On Oct. 20, Saracen Casino Resort -- called "Big Saracen" by employees -- opened its doors, and in the 11 days it operated that month, it added an additional $40 million to the total wagers, bringing the total of both "Big Saracen" and "Baby Saracen" to $84.5 million. Of that total, the two casinos paid out nearly $79 million in winnings to casino patrons and paid just under $810,000 in taxes.

"Pre-covid, we were at $60 million a month," Saffa said. "Since we reopened, we've been at about $40 million a month at the annex as the baseline, so the difference in revenue for October is the new property. In 11 days, our revenue doubled so that puts us at over $3 million a day here."

According to the figures supplied to the Arkansas Racing Commission, the newly opened "Big Saracen" took in an average $3.6 million per day in revenue for the 11 days of October.

Under the current pandemic restrictions, however, city and county officials are faced with the difficult task of making projections for the upcoming year's budget without hard data regarding casino revenue, which complicates the budgeting process and could result in shortfalls if projections come in short.

However, Steve Miller, finance director for Pine Bluff, said city finances are relatively stable, and though the city has relied some on projected casino revenue, he said he thinks the projections are realistic.

"It would take more than a month or two shutdown of the casino to make it fall completely short," Miller said. "Right now we've got $3.7 million of casino revenue in the budget, with $1.9 million added this year for the raises and health care costs we paid this year and the salary survey. I think another $250,000 was spent on equalizing the fire department for the additional amount we gave the police department last year."

In the 2020 budget, police and fire personnel were given a 5% cost-of-living increase, and the police department -- by cutting 10 positions -- funded an additional $2,776 pay raise for each uniformed officer.

Miller said sales tax collections remained strong throughout 2020, with much of that driven by the purchase of construction materials in the city while the casino was under construction as well as from money spent in Pine Bluff by construction workers who were on the project.

Miller said depending on how things look between now and the end of the year, Mayor Shirley Washington and the City Council could decide to pull back on their projections and trim the budget, with an eye toward making changes later if revenue collections increase.

He said that even with the casino annex running at 60% capacity, revenue the city received from those tax collections equalled roughly 75% of the projected $1.2 million in revenue the city had anticipated for this year.

"We got $82,000 from the annex in November, in September we got $84,000 [and] in October we got $84,000, so that tells me that even when they're holding their capacity down, we're still going to get 75% of projected revenue," Miller said. "That means the big casino, if it runs like that all year and the projections are accurate, we'd get $4.5 million, but a couple of shutdown months would put a dent in that."

Given the current rise in infections and overall inability of health officials to control the virus, Miller said tax collections could likely begin to suffer with the conclusion of the major construction activity, which helped to fuel robust tax collections through the summer.

"It's a valid concern, and the situation with covid is changing," he said. "We started the budget coming off of summer, and it didn't look too bad, but now it's started to look worse."

Miller did say that if a vaccine is introduced soon and is successful, revenue should quickly recover as more people receive vaccinations and economic activity picks up. 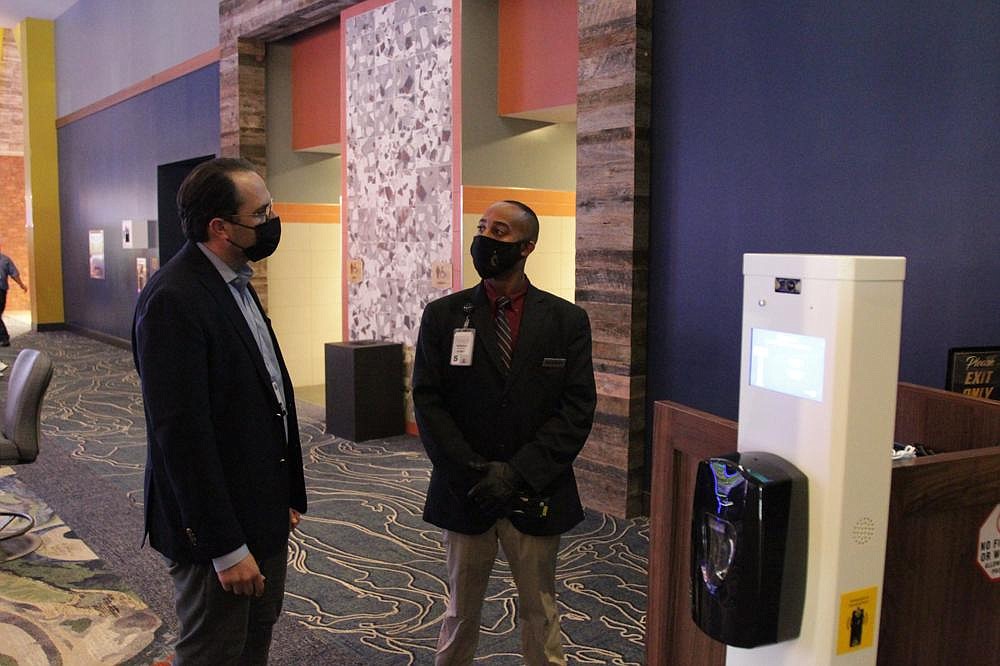 Carlton Saffa (left) talks with Sedearius Litzseg, a security official with Saracen Casino Resort, at the temperature check station that all patrons must pass through for screening before entering the gambling floor. (Pine Bluff Commercial/Dale Ellis)
ADVERTISEMENT