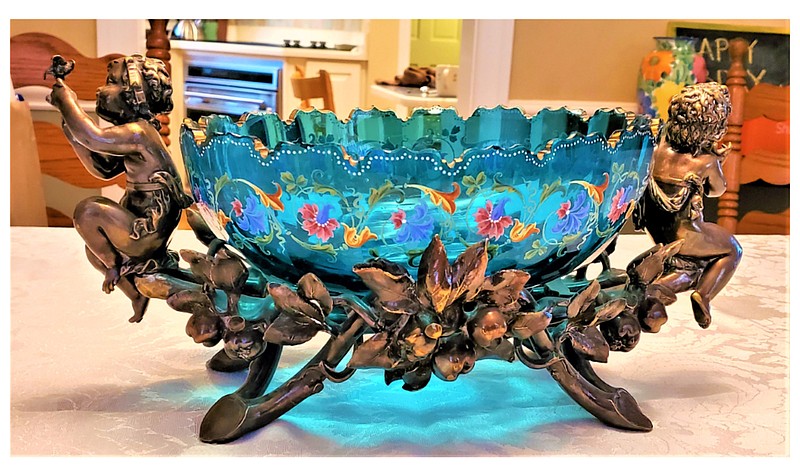 This piece is elegant and valuable if it is all original. (Handout/TNS)

DEAR HELAINE AND JOE: Good day! This is a bowl my wife and I inherited. It was originally acquired by my grandmother sometime in the 1930s — we think. We love the bowl but do not know anything about its history. Can you help?

DEAR D & L.P.: When we first saw the photos of this piece we thought, "Oh! What a nice and unusual bride's bowl." But careful examination soon revealed that we were both right and wrong.

"Bride's Bowls" or Bride's Baskets" were standard wedding gifts during the late 19th and early 20th centuries. They consisted of a frame — usually silver-plated — that held a bowl made from some sort of decorative glass. The variety was endless.

As we perused the pictures we noticed first a serial number and then the maker's name "Christofle" — and suddenly we were a little bit flabbergasted. Christofle et Cie was founded in Paris, France in 1830 (one source says the year was actually 1839) by Charles Christofle, who initially was a jeweler.

In 1842, he and his company bought the French patent rights for electroplating silver and gold and for the next 15 years they had an exclusive right to that business in France. Later Christofle branched out into making sterling silver and solid gold wares plus some items in bronze, and has always been a premium, luxury maker.

The metal portion of the piece in today's question is supposed to be silver-plated bronze, but we can see where the plating has been polished off leaving only traces in hard-to-reach places such as the ring that holds the bowl in place. We also believe we can see remnants of the polish embedded in the cherub's curly hair.

As it stands now, this "skinned" state is a minus in the value equation, but it can be re-silverplated — and if a good job is done — there will be no harm to the overall value. But now we turn to what may or may not be a much more serious problem: Is the bowl that is held within this frame the original or is it a replacement?

Glass bowls held in metal frames are easily broken and we often find frames with replacement bowls. In this case, the beautiful blue bowl appears to be in the Bohemian style with Moser style enameling — but a French origin is also a possibility.

Doing our research, we found perhaps a dozen of these Christofle frames and everyone held a clear, cut crystal bowl. D. & L.P. need to take a good look at their centerpiece bowl and make sure it fits tightly into the rim at the bottom of the frame. If it fits snugly, it is probably the original, but if it is even a little bit loosey-goosey and moves around even slightly it is probably a replacement.