State’s GOP leaders unmoved by claims of election fraud by Compiled by Democrat-Gazette Staff From Wire Reports | November 21, 2020 at 9:11 a.m. 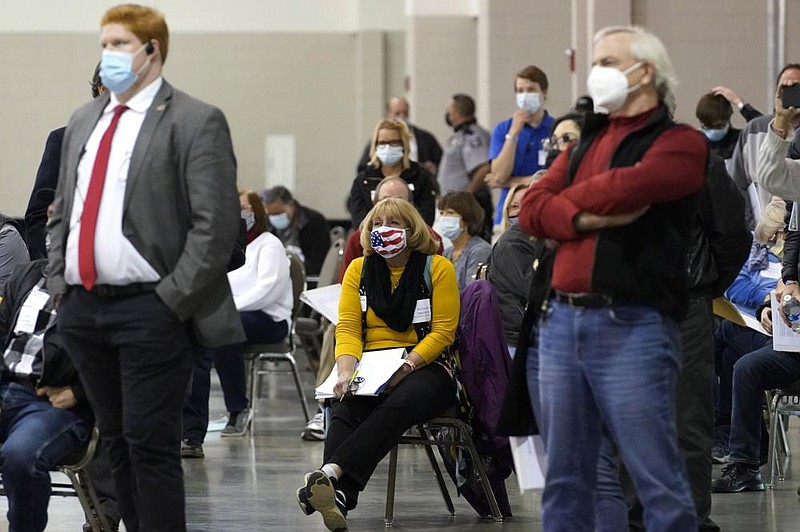 WASHINGTON -- President Donald Trump on Friday summoned a delegation of Republican lawmakers from Michigan, including the state's Senate majority leader and House speaker, as part of his efforts to persuade judges and election officials in the state to grant him the state's electors.

Rick Hasen, an election law expert and professor, wrote that there would be "rioting" in the streets if an effort was made to set aside the vote in Michigan, calling it tantamount to an attempted coup.

"We should worry because this is profoundly antidemocratic and is delegitimizing the victory of Joe Biden in a free and fair election," Hasan wrote on his blog. "It is profoundly depressing we still have to discuss this. But it is extremely unlikely to lead to any different result for president."

[Video not showing up above? Click here to watch » https://www.youtube.com/watch?v=GWhNvJbwUQ4]

In a joint statement after the White House meeting, the Michigan lawmakers said allegations of fraud should be investigated, but indicated they were unmoved by Trump's claims thus far. "We have not yet been made aware of any information that would change the outcome of the election in Michigan and as legislative leaders, we will follow the law and follow the normal process regarding Michigan's electors, just as we have said throughout this election."

"The candidates who win the most votes win elections and Michigan's electoral votes," they added, saying they used the meeting with Trump to press him for more pandemic aid money for their state.

The president on Friday again claimed victory, declaring as an aside during a White House announcement on drug pricing, "I won, by the way, but you know, we'll find that out."

Trump's roughly hourlong meeting Friday with the Michigan lawmakers took place days after he personally called two canvass board officials who had refused to certify the results in Wayne County, Michigan's most populous county and one that overwhelmingly favored Biden. The two GOP officials eventually agreed to certify the results. But after Trump's call, they said they had second thoughts.

The Board of State Canvassers is to meet Monday to certify the statewide outcome and it was unclear whether Republican members of that panel would similarly balk.

Some Trump allies have expressed hope that state lawmakers could intervene in selecting Republican electors, as the president and his attorneys have pushed allegations of fraud that have been repeatedly rejected in courtrooms across the country. It was with that in mind that Trump invited the Michigan lawmakers. He also was said to be considering extending a similar invitation to legislators from Pennsylvania.

"The president could be calling Republican legislators and others to the White House to try and squeeze them," tweeted former Trump national security adviser John Bolton. "Republicans at all levels -- state, county, election boards, legislatures -- must resist this political pressure."

White House press secretary Kayleigh McEnany told reporters that the meeting with Michigan officials was "not an advocacy meeting" and insisted Trump "routinely meets with lawmakers from across the country."

As he departed Detroit for Washington on Friday morning, state Senate Majority Leader Mike Shirkey was swarmed by activists bearing signs that read: "Respect the Vote" and "Protect Democracy."

House Speaker Lee Chatfield tweeted before the meeting with Trump: "No matter the party, when you have an opportunity to meet with the President of the United States, of course you take it. I won't apologize for that."

Experts on Michigan election law said the authority of the canvassers board was limited in scope.

"Their duties are to receive the canvass and certify the canvass, that's it," said John Pirich, a former assistant attorney general who teaches at Michigan State University Law School. "They have absolutely no power to investigate allegations, theories or any half-brained kind of arguments that are being thrown around."

The Michigan Legislature would be called on to select electors if Trump succeeded in persuading the board not to certify the results.

Democratic Gov. Gretchen Whitmer could seek a court order forcing board members to certify the election and could remove those who refused, said Steve Liedel, another election attorney.

Trump's play for Michigan was among a series of last-ditch tactics in battleground states that his team is using to challenge his defeat. The team also has suggested in a legal challenge that Pennsylvania set aside the popular vote there and pressured county officials in Arizona to delay certifying vote tallies. There have been a number of lawsuits in battleground states that have failed so far to reverse any votes.

In two Democratic-leaning counties in Wisconsin that are recounting votes, Trump's campaign sought to discard tens of thousands of absentee ballots that it alleged should not have been counted.

The objections were twice denied by the three-member Dane County Board of Canvassers on bipartisan votes. Trump was expected to make the same objections in Milwaukee County ahead of a court challenge once the recount concludes.

In Georgia, Secretary of State Brad Raffensperger certified results reported by the state's 159 counties that show Biden with 2.47 million votes, Trump with 2.46 million and Libertarian Jo Jorgensen with 62,138. That leaves Biden leading by a margin of 12,670 votes, or 0.25%.

Later Friday, Gov. Brian Kemp certified the state's slate of 16 presidential electors. In an announcement streamed online, Kemp did not clearly endorse the results. Instead he said the law requires him to "formalize the certification, which paves the way for the Trump campaign to pursue other legal options and a separate recount if they choose."

In Minnesota, a state that Biden won handily, some GOP officials are now raising concerns over "data abnormalities."

"It's an abuse of office," he said. It's an open attempt to intimidate election officials, it's absolutely appalling. ... It's also pathetic."

Republican Sen. Mitt Romney late Thursday denounced Trump's attempt to pressure Republican officials to reverse the results of the election, describing it as among the most "undemocratic" actions ever taken by a sitting president.

"Having failed to make even a plausible case of widespread fraud or conspiracy before any court of law, the President has now resorted to overt pressure on state and local officials to subvert the will of the people and overturn the election," the Utah senator said in a statement posted to Twitter. "It is difficult to imagine a worse, more undemocratic action by a sitting American President."

Romney joined Sen. Ben Sasse of Nebraska as the only two GOP senators on Thursday to publicly oppose the president's actions as Trump and his campaign continue making allegations of widespread voter fraud in Michigan and other states in hope of remaining in power.

Other Republicans offered more measured criticism, including Sen. Joni Ernst of Iowa, who lashed out at claims by Trump campaign attorney Sidney Powell that down-ballot candidates "paid to have the system rigged to work for them." Ernst called Powell's comments "offensive" and "outrageous." In an interview with Fox News Radio, Ernst said she believed Trump had the right to use the courts for any legal challenges, but added "there does have to be proof."

"I haven't seen proof yet. There are a lot of allegations out there and that's exactly why we have the court system," she said. "I have not seen it personally. I'm sure they'll be able to present it to a judge."

Meanwhile, Fox News host Tucker Carlson said he was fed up with the lack of evidence produced by Powell.

"We invited Sidney Powell on the show. We would have given her the whole hour," Carlson said. "But she never sent us any evidence, despite a lot of requests, polite requests. Not a page. When we kept pressing, she got angry and told us to stop contacting her."

Carlson also noted that "she never demonstrated that a single actual vote was moved illegitimately by software from one candidate to another. Not one."

Powell pushed back on Carlson in a statement, saying that she would "encourage him and all journalists to review all the materials we have provided so far and conduct their own investigations." 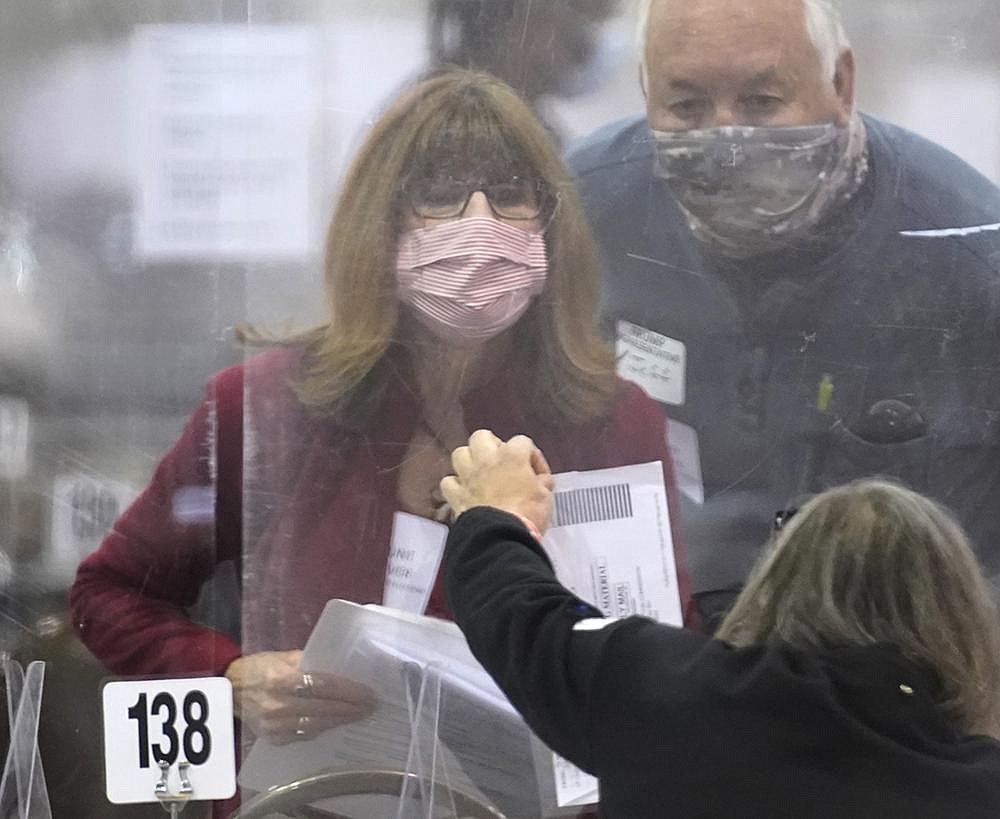 Observers check ballots Friday during a hand recount of presidential votes in Milwaukee. The Trump campaign has sought to discard thousands of absentee ballots in two Democrat-leaning counties in Wisconsin. (AP/Nam Y. Huh) 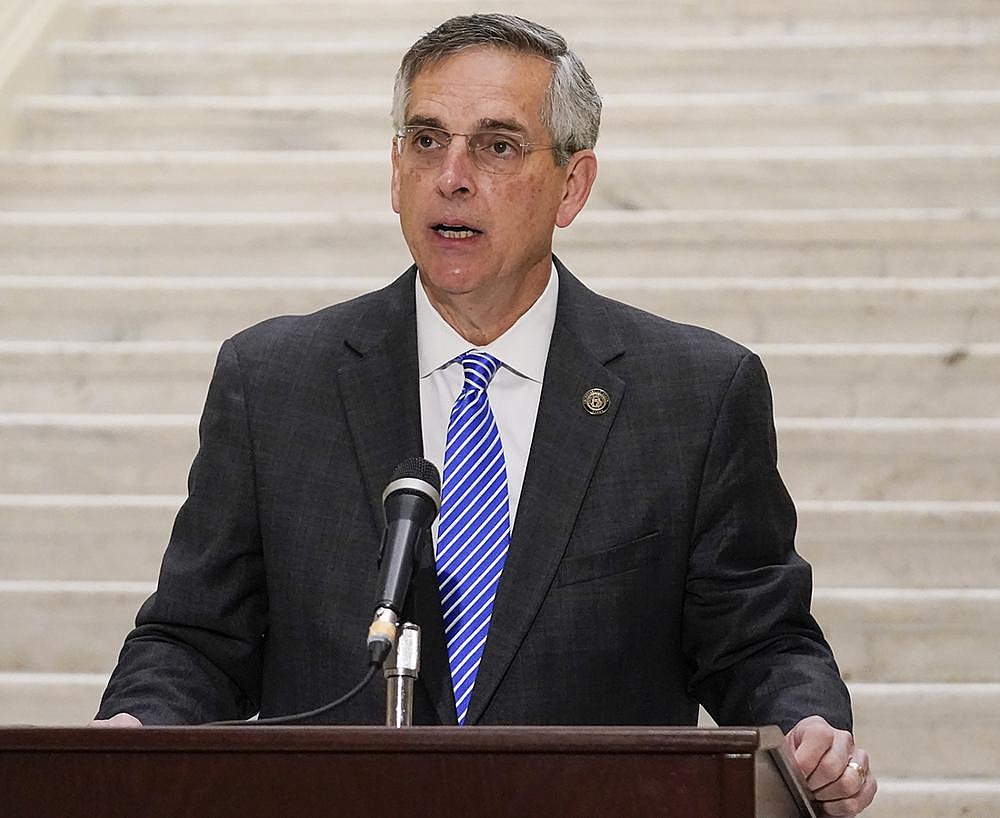 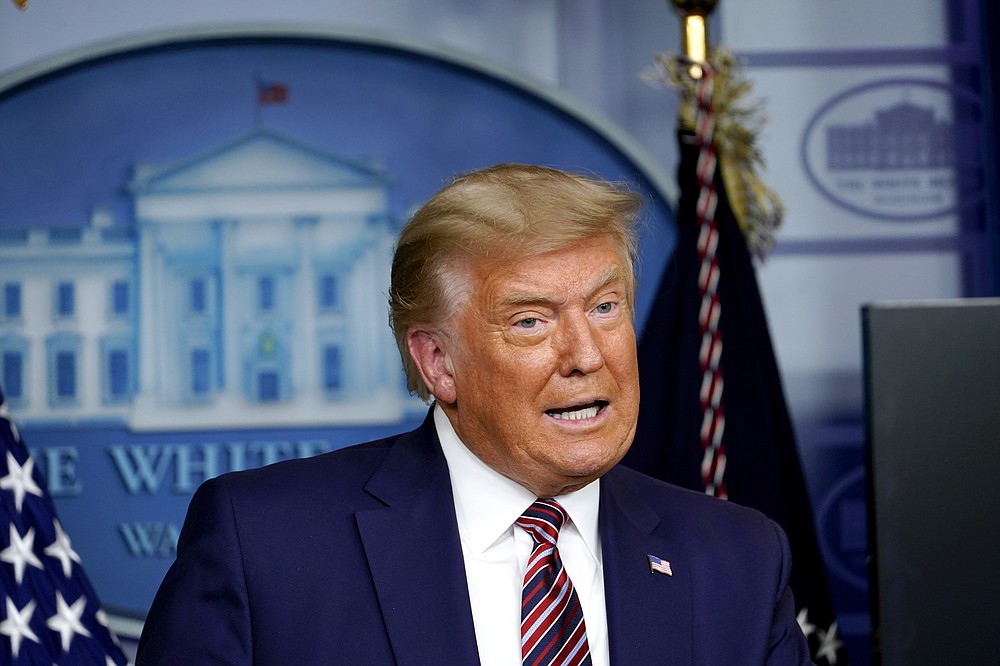 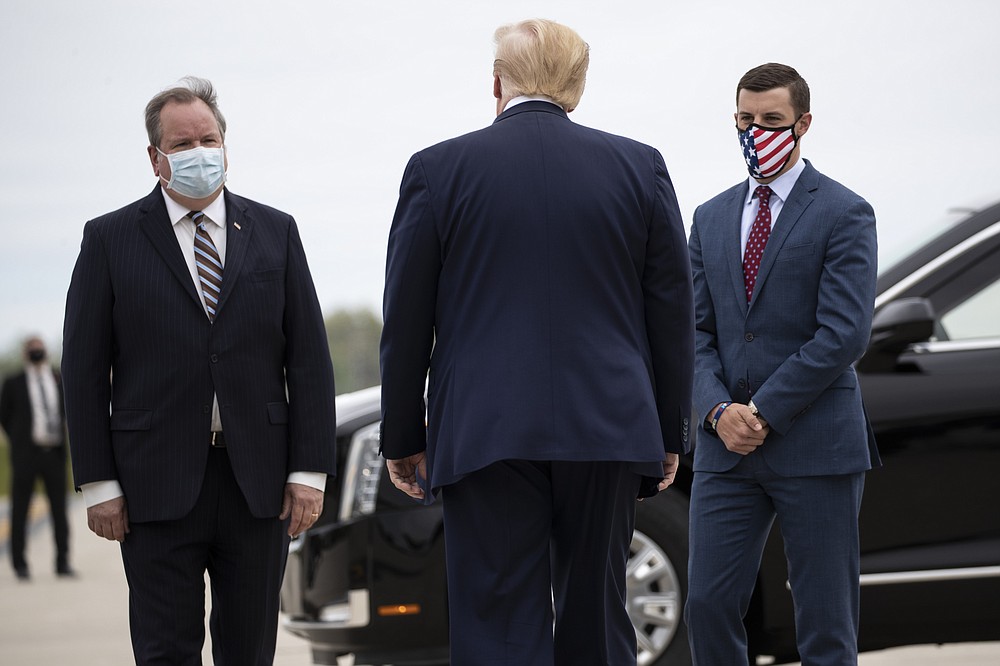 FILE - In this May 21, 2020, file photo, President Donald Trump is greeted by Kurt Heise, left, Supervisor of Plymouth Township, Mich., and Speaker Lee Chatfield, of the Michigan House of Representatives after stepping off Air Force One as he arrives at Detroit Metro Airport in Detroit. President Donald Trump summoned Michigan's Republican legislative leaders Chatfield and Senate Majority Leader Mike Shirkey, to the White House for a meeting Friday, Nov. 20, amid a GOP push to overturn the certification of Democrat Joe Biden's victory in the battleground state. (AP Photo/Alex Brandon, File) 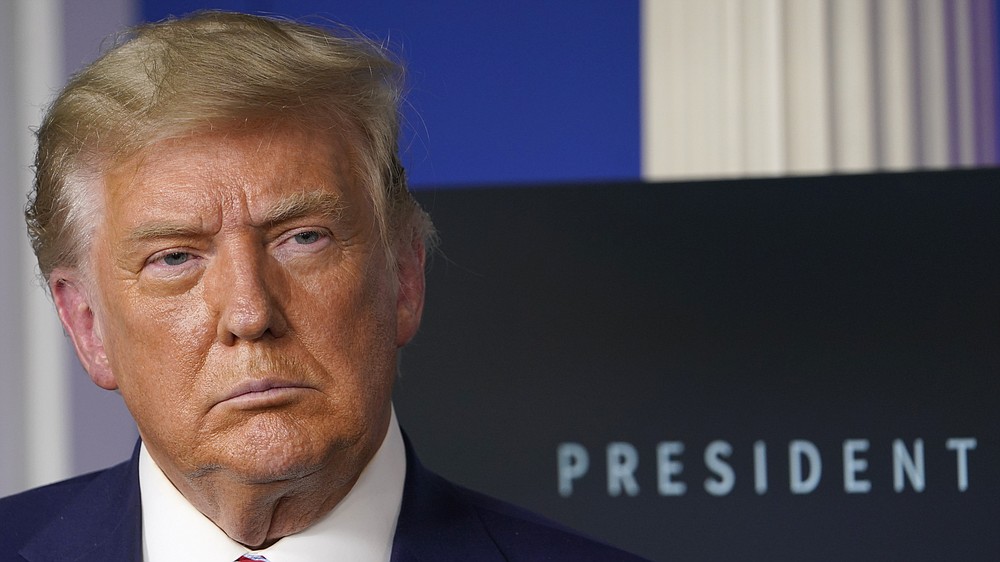 President Donald Trump listens during an event in the briefing room of the White House in Washington, Friday, Nov. 20, 2020, on prescription drug prices. (AP Photo/Susan Walsh) 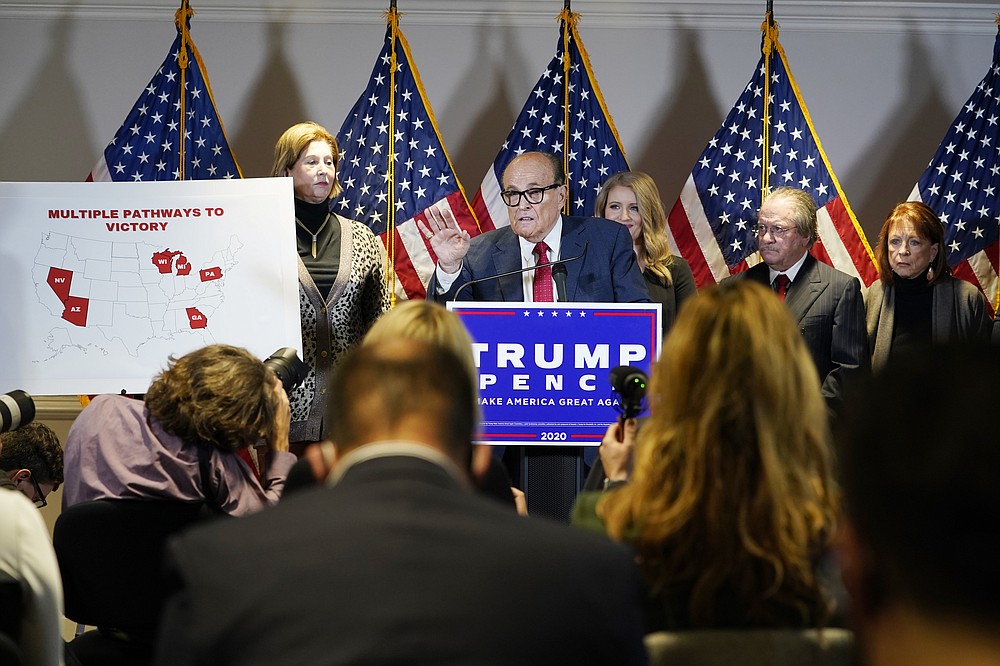 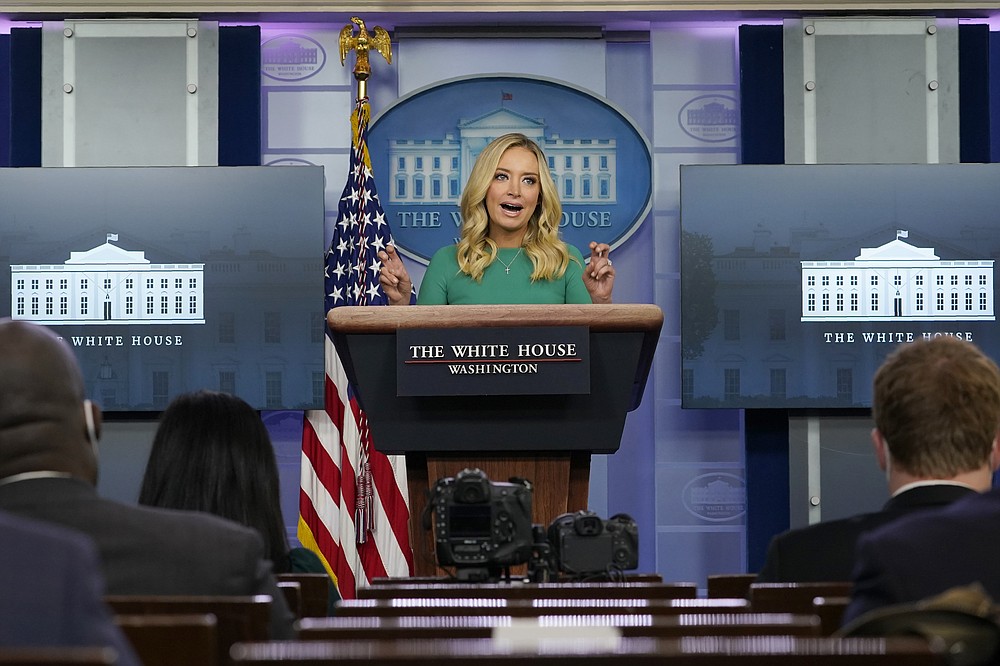