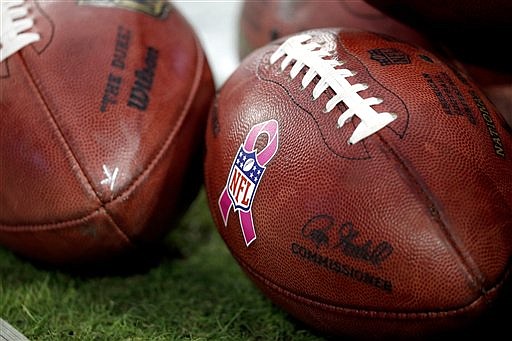 Footballs sporting the NFL Breast Cancer Awareness pink ribbon sit on the field prior to a football game in this Oct. 23, 2016, file photo.

Breast cancer is often thought of as "a woman's disease" but this is not true, said Janette Wheat, cooperative-extension program specialist and professor of human development and family studies at the University of Arkansas at Pine Bluff.

About 1 out of every 100 breast cancers diagnosed in the U.S. is found in a man, she said in a news release.

In 2017, there were about 2,300 new cases of male breast cancer and 500 deaths, according to the 2020 report from the Centers for Disease Control and Prevention's Division of Cancer Prevention and Control.

Although having risk factors does not mean a man will get breast cancer, some things may increase the risk, such as genetic mutations, a family history and certain radiation and hormone therapy treatments.

A recently released CDC Morbidity and Mortality Weekly Report said that a lot of research on survival among men with breast cancer is not available because of its rarity. The CDC's National Program of Cancer Registries reports on the relative survival rates of men diagnosed with breast cancer during 2007-2016.

The most common symptoms of breast cancer in men are as follows:

• Lump or swelling in the breast.

• Redness or flaky skin on the breast.

• Irritation or dimpling of breast skin.

These symptoms can occur with conditions other than cancer, but if men have any symptoms, they should see a doctor right away, advises Wheat and the CDC.

• Family history -- A man's risk is higher if a close family member has had breast cancer.

• Radiation therapy -- Men who have had radiation to the chest have a higher risk.

• Hormone therapy -- Drugs containing estrogen that were used to treat prostate cancer in the past increase men's chances of breast cancer.

• Klinefelter syndrome -- This is a rare genetic condition in which a male has an extra X chromosome, which can lead to the body making higher levels of estrogen and lower levels of androgens.

• Conditions that affect testicles -- Injury, swelling or surgery to remove the testicles can increase risk.

If several family members have had breast or ovarian cancer, or a family member has a known BRCA1 or BRCA2 mutation, men should give this information to their doctor who may refer them for genetic counseling. Mutations in the BRCA genes can also increase the risk of high-grade prostate cancer and pancreatic cancer, reports the CDC.